Sometimes, it’s all in the math.

For years, Dominion Energy and its apologists have told Virginians that the Atlantic Coast Pipeline is vitally important for Virginia residents and businesses. Chief among the cheerleaders has been outgoing Virginia Governor and Presidential hopeful Terry McAuliffe.  In fact, McAuliffe has risked making two massive, fracked-gas pipelines his most enduring legacy.

In 2014, McAuliffe claimed that the $5.5 billion, 600-mile Atlantic Coast Pipeline project would, as the Washington Post noted “prevent spikes in energy bills during severe weather, lure heavy manufacturing to the state” and give Virginia what McAuliffe called ‘direct access to the most affordable natural gas supply in the United States.’”

It turns out that was all a lie.  Virginia has been played.

And now it’s on tape. 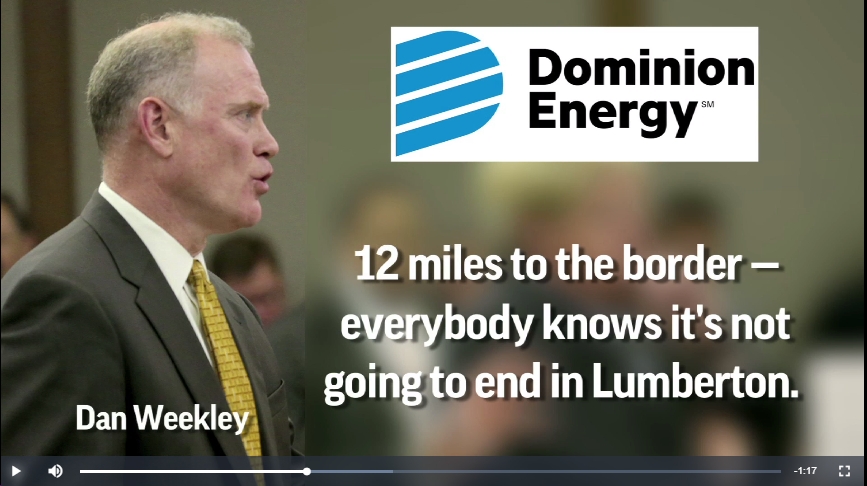 Dominion told the Virginia Department of Environmental Quality that the Atlantic Coast Pipeline’s gas was needed in Virginia.  It made that claim to secure a Water Quality Certification under Section 401 of the Clean Water Act.  Without that certification from Virginia, the ACP cannot be built.

Earlier this year, based on documents Dominion filed with DEQ and the Federal Energy Regulatory Commission, Virginia’s DEQ issued a Draft Water Quality Certification that described the Atlantic Coast Pipeline as follows:

“Project” means an interstate natural gas transmission pipeline approximately 605-miles in length to transport up to 1.5 MMDth/d of natural gas from supply areas in the Appalachian region of West Virginia to demand areas in Virginia and North Carolina.

“MMDth/d” stands for one million dekatherms per day, which is equivalent to one billion cubic feet per day.  In plain English. Dominion told DEQ, and DEQ repeated in its draft certification, that the “project” would transport a total of 1.5 million dekatherms of natural gas (or 1 billion cubic feet) “per day” to Virginia and North Carolina.  DEQ did not say how much would go to Virginia and how much to North Carolina.

It turns out those numbers were a lie.  Lying to FERC and the Virginia DEQ may place Dominion executives in civil or criminal jeopardy. Exhibit A is DEQ’s Draft Water Quality Certification.

Exhibit B is The Tape.

Dan Weekley, Dominion Energy’s vice president and general manager of Southern pipeline operations, told attendees at a recent energy conference “everybody knows” the Atlantic Coast Pipeline — currently slated to pass through Virginia, West Virginia and North Carolina — is not going to stop there, despite what the current plans say.

“We could bring in almost a billion cubic feet (28 million cubic meters) a day into South Carolina,” Weekley said, according to an audio recording The Associated Press obtained from a conference attendee. The attendee requested anonymity out of concern for not wanting to harm business or personal relationships.

Do the math.  Dominion’s vice president in charge of Southern pipeline development has just admitted that two thirds of the natural gas that allegedly was “needed” in Virginia may actually go to South Carolina.  How much of the rest will go to North Carolina?  How much will be exported?  The answers to these questions are not clear because the data comes from Dominion and Dominion has lied.  And now they’ve been caught.

Which leads to a series of additional questions.  Thus far, the Associated Press story has been picked up by a paper in Staunton, Virginia and in South Carolina, as well as by some national outlets.  But the story has not appeared in a major Virginia or D.C. metro area newspaper. Why not?

And here are some more questions: Will Gov. Terry McAuliffe stay silent, and thus become complicit, in Dominion’s lie?  Will McAuliffe’s DEQ require Dominion to explain why its official filings have now been contradicted by Dominion’s own chief of Southern pipeline operations?  Will other Virginia political leaders – and candidates – who have thus far stayed silent, allow Dominion’s latest lie to go unanswered?  Will Attorney General Mark Herring open an investigation into what Dominion said in its public filings with a state agency and whether they were truthful?

The answer to these questions will tell us all whether, as some candidates have claimed, “science will dictate” whether Virginia’s DEQ will approve the Atlantic Coast Pipeline.

Or whether that too was a lie.