Some relatively good news for a change (see press release, below, from the Chesapeake Climate Action Network – CCAN); although of course this pipeline shouldn’t be built in the first place. As for Dominion’s request to basically endanger migratory birds so that it can make as much $$$ as possible from its environmentally destructive, economically nonsensical Atlantic Coast Pipeline, I’m with CCAN Director Mike Tidwell in calling that a “radical request.” Yet again, the arrogance of Dominion Energy is simply mind boggling. Meanwhile, it’s long past time for Gov. Northam and for Virginia environmental authorities to kill this pipeline completely — and also to rein in this out-of-control monopoly utility. As Mike Tidwell puts it, “It is the hope of many landowners and environmental advocates that this delay may wind up being permanent.”

RICHMOND, VA — Today, the Federal Energy Regulatory Commission (FERC) issued a denial of the request by Atlantic Coast Pipeline, LLC to extend for two months the right to fell trees for the pipeline’s construction.

“It is a victory for the people of Virginia that the Federal Energy Regulatory Commission said ‘no’ to Dominion Energy’s radical request to cut down trees for a radical gas pipeline during the migratory bird nesting season. FERC has done the right thing in denying this request.

“If this decision stands, we are heartened that it would significantly delay the pipeline construction process. It is the hope of many landowners and environmental advocates that this delay may wind up being permanent. Governor Ralph Northam should understand that Dominion’s fracked-gas pipelines is not only bad for migratory birds and bats, but bad for all Virginians who want clean water, clean air, and a stable climate.” 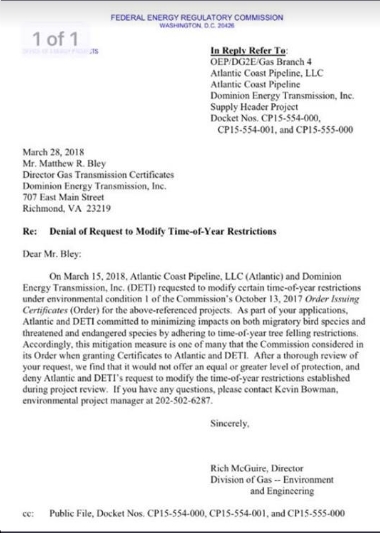