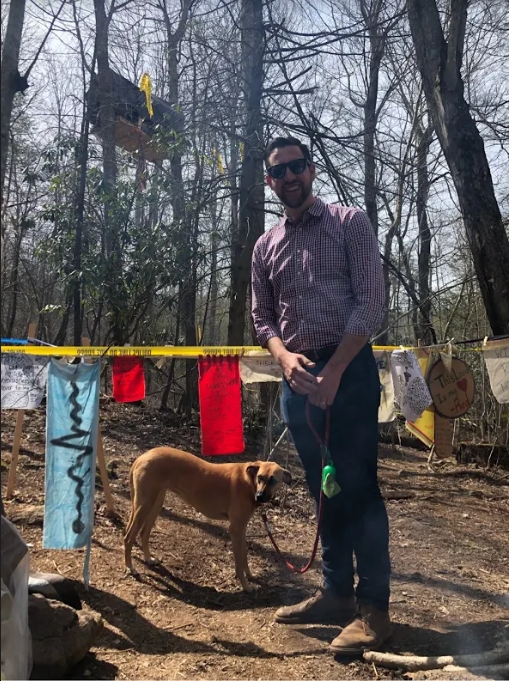 by Peter Volosin, Democratic candidate for Congress in VA-06

Climate justice is one of the civil rights issues of our time, but the majority of us still don’t see it. Thankfully, there are people who do and yesterday, on Earth Day, I met some amazing people standing up for our environment.

In Virginia, we are building two major pipelines known as the Atlantic Coast Pipeline and the Mountain Valley Pipeline. To get these approved Dominion Power argued that the demand for energy will grow by 165% over the next two decades and that the existing infrastructure would not be able to keep up with demand.

They said the answer was to draw on fracked gas and pipe it to our homes. And it was a popular idea among energy companies in our region. A total of 19 pipelines are now proposed for Appalachia. In reality, these pipelines are about facilitating natural gas to ports for sale. It is called the “Atlantic Coast Pipeline” after all. Simply put, these projects cut costs and remove middlemen, so Dominion can turn a greater profit. To say their eminent domain request serves a greater good is a farce.

The Atlantic Coast Pipeline and the Mountain Valley Pipeline cost billions of dollars and force us to commit to fracked gas for the foreseeable future. This in turn creates demand for more drilling and fracking to justify the investment resulting in a never-ending downward spiral of reliance on fracked gas. These two pipelines are just the beginning.

Yesterday, I met some incredible people making a big difference to turn the tide. Each of them, at one point, stood alone. But as Aida Washington at Union Hill told a packed meeting of activists, you must “stand up for what is right, even if you have to stand alone”. I also thought of Red and Minor Terry, who I met earlier in the day, perched high in the trees on their own property. They were bravely standing in protest against the Mountain Valley Pipeline, defending their land, their water and their rights.

I learned a lot for Red, Minor and the community at Union Hill yesterday and three themes stand out for me:

According to the Southern Environmental Law Center, Dominion Energy has inflated the future demand for electricity, and considering under capacity on existing pipelines, there are serious questions over whether we need two new mega pipelines in the first place.

The impending impact on our community’s health and well-being, the abuse of eminent domain to benefit a private company, and the clear racial injustices perpetrated in the building of these pipelines tell us quite clearly the cost is too high.

This multi-billion-dollar investment, which includes massive subsidies from the federal government, is taking investment away from renewables. Already, solar energy employs more people than the fossil fuel industry and is the fastest growing source of electricity in the United States. Renewable energy sources are the best way for us to create long-term sustainable jobs, limit our impact on our environment, and bring energy independence to our communities. The alternative is fractured communities and lives, destruction of our natural beauty, and the abuse of government regulation to benefit private corporations.

For these reasons I #StandWithRed, her daughter Minor, and the community of Union Hill.