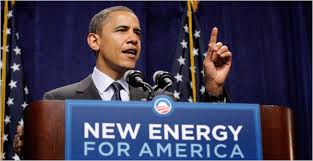 If you look at any of the 24X7 news shows or even the Today Show, you will see everyone proclaiming that there is an anti-incumbent mood spreading across America. There is good reason to say that as evidenced by the size of Tea Party rallies and even a few of the races last Tuesday. But, my personal opinion is that this is less about an anti-incumbent mood and more about a “pro-change” disposition. Voters are angry about the current state of blame and stall politics. They expect elected officials to keep their promises – and that extends to clean energy and climate legislation.

Even though clean energy and climate issues are rarely at the heart of the anti-incumbency rhetoric, the frustration with all things Beltway could block comprehensive energy legislation this year.

President Obama's leadership is the only force that can change that.

You see, when the electorate turns anti-Washington, Congressmen freeze up. They get scared of taking bold steps and they start saying “no” to everything.

Even on a good day, the odds of passing any bill in Congress–no matter the issue–starts at about 5 percent. Smart gamblers always bet the no vote in Congress.

But being a naysayer becomes even more attractive to politicians when they think their job is at risk. Voting “no” on a big, transformative bill allows them to give the illusion that they are “playing it safe” and to keep the bull's-eye off their back for potential mid-term popularity contests.

“No” may be an easy decision for politicians, but it is the wrong choice for the American people.

We need to say yes to a clean energy and climate bill that will generate nearly 2 million jobs, put our nation at the forefront of one of the biggest markets of the 21st century, end our reliance on oil, and reduce dangerous pollution. Yet so many lawmakers are in a panic over elections that they can't see these benefits.

They need to snap out of it. In a movie, this is the moment when someone would come along and slap the panicking person in the face. In politics, that slap is leadership.

President Obama must take charge of clean energy and climate legislation. The only major bills that pass through Congress are the ones with White House support. We are fortunate that President Obama backs climate action, but given this anti-incumbent mood, we need him not just to support it; we need him to lead it.

What would that look like? We saw it in the heath care debate. President Obama went into campaign mode and stumped on that bill every single day. He called in political chits. He got people in the same room to negotiate. He dragged it over the finish line because he went farther than asking for change. He demanded it.

That is what we need him to do for a clean energy and climate bill. Because let's be frank: either we see some leadership or we call it a day.

If we don't pass the bill this year, we won't get another chance for years. Dave Robert's painted the grim prospects for national climate action given the likely outcomes of future election cycles in his Grist blog this week. It doesn't look good for another eight years – at least.

We need to get America moving right now toward a clean energy future, and we need President Obama to lead the way.

This week, Robert Redford appeared in a television ad for the NRDC that has already been written about in the Washington Post and New York Times. Interestingly, he didn't call on Congress to take clean energy and climate action. He called on President Obama.

The president is the one with the bully pulpit. Tell him to use it on behalf of clean energy and climate solutions. Securing our future depends on it.