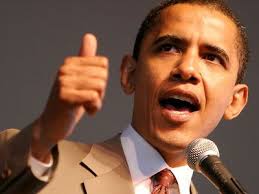 I’m taking this cautiously and skeptically; still, I like the looks of these polls!

1. According to Political Wire, “A new Associated Press-GfK poll shows Democrats now leading the generic congressional ballot, 45% to 40%, a reversal from last month when Republicans led by three points.”

2. Gallup now has President Obama’s approval rating at the highest in three months, at 52%-41% (+11 points). We’ll see if it can hold at that level of increase further in coming weeks and months. I’m hoping Obama can reach 60% or so by the fall. If he does, Democrats will be in much better shape come November than they appear to be now.

3. Research 2000 now has President Obama’s favorable/unfavorable rating at 55%-40% (+15 points), with the “right track/wrong track” reading now at the highest level since July 9, 2009. Also, the voter intensity gap between Republicans and Democrats “narrowed noticeably this week,” to just 7 points (71%-64%). Finally, 52% of Americans now say they’d be more likely to vote for a candidate “who supports and will work to improve the new health care reform law”, while just 41% say they prefer “a candidate who will work to repeal it completely.”

The bottom line is this: if the economy keeps improving, and specifically if it keeps adding jobs at the rate we saw last month, then people will feel better about the country’s direction and more likely to keep incumbents in office. On the other hand, if the economy heads in the wrong direction between now and this fall, then I’d say we’re looking at a bad November for Democrats.  Other than that, Democrats need to be out there telling voters what historians already know: “President Obama’s legislative record during a crisis-ridden presidency already puts him in a league with such consequential presidents as Lyndon Johnson and Franklin Roosevelt.” That seems like the type of news you’d want to share with everybody! 🙂

Will post video soon...here's what just happened at the VA GOP meeting, where they apparently voted narrowly against a motion to switch from a convention to a primary. https://bluevirginia.us/2021/01/video-as-va-gop-argues-endlessly-over-its-method-of-nomination-state-central-committee-member-complains-about-the-vicious-incivility-and-attacks-that-have-been-coming-from-one-side#comment-5239085091