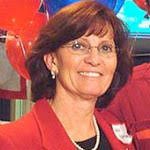 The following endorsements are made in good, snarky, blogger fun. Having said that, there is a grain of seriousness in here, as of course I wish the Republicans will nominate the craziest, most far-right-wing, unelectable people for the general election. Either that, or – paradoxically – let’s hope they nominate someone who is completely unacceptable to the far right wing, prompting them to bolt and support a  third-party candidate, as Laurence Verga campaign manager Bill Hay worries in today’s Washington Post.

Go Catherine “Bullet Box” Crabill!  The deal here is that if Crazy Crabill defeats Rep. Rob Wittman for the Republican nomination on Tuesday, then Democratic nominee Krystal Ball has a shot at winning in November. If not, then Ball – as strong a candidate as she might be – almost certainly won’t win. So, again, go Catherine Crabill, the “blue team” is rooting for you! 🙂

I’ve got to disagree with Bearing Drift on this one. Bert Mizusawa has far, far too impressive a resume — “a Brigadier General in the Army Reserve, and one of the Army’s most highly decorated officers… a Masters in Strategic Studies from the U.S. Army War College and is a graduate of National Defense University’s CAPSTONE program” — to be the Republican nominee in this district. Instead, I strongly endorse Regent University grad, Obama donor (and also Louise Lucas donor), used-car dealer, and “Cash for Clunkers” beneficiary Scott Rigell for the Republican nomination in the 2nd CD. It should be hilarious watching Glenn Nye tear Rigell apart for hypocrisy, among other things.  Go Scott Rigell! Heh.

On this one, I’ve got to go with the Bearing Drift guys: Feda Morton for Congress!  As far right wing as you can get, Morton also — according to The Hook – is the “traditional family values candidate who once lost custody of her children” and is now “in the news again for alleged plagiarism.” As one commenter wrote at The Hook, “Man. This woman is a disaster.” Exactly, which is why I strongly endorse her for the Republican nomination against the superb Rep. Tom Perriello. I also strongly encourage any and all tea partiers to run as third, fourth, or fifth party candidates this November. The more the merrier, I say!

Who cares, Jim Moran’s going to romp in this rock-solid “blue” district over either Matthew Berry or Patrick Murray. Yawn. Also, as Loudoun Insider at Too Conservative points out, the two Republican candidates are apparently in a “we may lose, but at least we’ll be pure” contest.  The only question is, will that “purity” allow them to break 40% of the vote in Arlington and Alexandria this November? I doubt it, but stay tuned!

I had always assumed that Keith Fimian was the more right wing candidate in this race, but after listening to this past Friday’s WTOP debate between Fimian and Pat Herrity, I’m not so sure anymore. Given this, I guess I’d have to go with Fimian for the Republican nomination, given that he’s already a proven loser (by 12 points in 2008) against Rep. Gerry Connolly.  Plus, there’s the “Real Keith Fimian Story”, and quite a story it is! Heh. With that, I say, go Keith Fimian!