Thanks to Loudoun County Supervisor Stevens Miller for his excellent coverage of today’s “Pledge to America” unveiling in Sterling.  The photo of Miller standing behind barbed wire – that’s right, barbed wire – really says it all, but read the whole thing.  Here’s an excerpt:

At 9:30 this morning, I was able to stand near all of the (maybe 17?) supporters who had also come, many holding flags and one fellow clacking away with the cap on a tea kettle he held as anyone drove by. Most apparently thought he was funny, but a couple sped up to get past him. He, Eugene Delgaudio, and maybe fifteen of, I guess, Eugene’s closest friends waved hand-made signs and chanted things like, “New congress now!” With their district represented by a thirty-year Republican incumbent seeking re-election, that seemed an odd thing to chant.

The handful of chanters and I had to stand outside the event because it, unlike the 1994 signing on the Capitol steps, was private, indoors, and by-invitation-only-thank-you. On this beautiful, sunny day, we stood outside and looked at a building surrounded by a large empty parking lot (empty but for a half-dozen television cameras), which, in turn was surrounded by a barbed-wire-topped fence (wire leaning our way, of course). Plenty of room to reveal their latest contract, but Boehner, Pence, Wolf, Cantor, and the rest of the “make Congress more open” members of the GOP who were present decided that behind closed doors was the right place to have a dialog with the people… 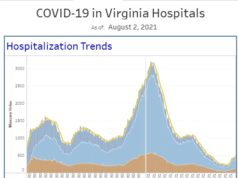 Good stuff, thanks to *Democrats* https://bluevirginia.us/2021/08/monday-news-senate-poised-to-deliver-infrastructure-win-for-bidens-agenda-the-g-o-p-menace-to-society-dont-let-anyone-normalize-january-6-general-assembly-convening-at-ca#comment-5478948554

Good to see future Lt. Gov. @HalaAyala in Richmond this morning "ready to get to work and continue investing in broadband, schools, small businesses, and families" https://bluevirginia.us/2021/08/monday-news-senate-poised-to-deliver-infrastructure-win-for-bidens-agenda-the-g-o-p-menace-to-society-dont-let-anyone-normalize-january-6-general-assembly-convening-at-ca#comment-5478919609