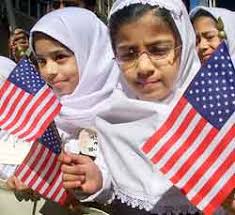 I couldn’t agree more with Rep. Moran; these so-called “hearings” – actually, a McCarthyite witch hunt – on Muslim Americans by Rep. Peter King are an utter disgrace to every value I hold dear as an American. What is it about the Constitution, Bill of Rights, and other basic documents we cherish, that Republicans can’t seem to understand? And what is it about the McCarthyist, ignorant, bigoted, fearful (and fear-mongering) mentality that so attracts them? Where are Abraham Lincoln, Teddy Roosevelt, Dwight Eisenhower, Gerald Ford, and heck even Ronald Reagan and George W. Bush when you need them, and when the GOP has gone completely off the deep end into birtherism, climate science denial, xenophobia, Islamophobia, etc., etc? Anyway, thank you for the following letter from 57 House Democrats (why only 57?!?), as well as by the strong statement from Rep. Jim Moran (bolding added by me for emphasis):

Calls on Rep. King to broaden focus or cancel hearing

“Today I joined with 56 of my colleagues in urging House Homeland Security Committee Chairman Peter King not to go forward with the first in a series of hearings focused on radicalization among Muslim Americans.  These hearings, which focus exclusively on one religious faith, contradict our nation’s commitment to religious freedom and will only weaken ongoing cooperation between law enforcement and the Muslim American community.

“Violent extremism, be it derived from religious, cultural or political beliefs, is a serious issue worthy of congressional scrutiny. Unfortunately, Chairman King’s planned hearings fall far short of the standard we expect from a congressional hearing. Under the erroneous belief that large numbers of Muslim Americans support violent actions by radicals, Chairman King has decided to focus only on extremism derived from a perversion of the Islamic faith.

“In reality, information from Muslim Americans has helped law enforcement prevent three-quarters of all al-Qaeda related plots threatening the U.S. since December 2009.  In Northern Virginia alone, the Muslim community played a critical role in the arrest of five individuals in 2009 attempting to join a terrorist group in Pakistan and the arrest of Farooque Ahmed in 2010 on charges of conspiring to bomb the Metro transit system.

“I am proud to represent a diverse community where Muslim Americans make valuable contributions to our society each day.  Hearings that call into question the loyalty of a group of American citizens based upon their religious faith [do] not reflect our nation’s values and [are] counterproductive in the fight against terrorism.  I strongly urge Chairman King to call off these hearings or expand their scope to include all forms of violent extremism.”

The following letter was sent by Moran and 56 of his colleagues to Chairman Peter King:

We are writing regarding the Homeland Security Committee’s upcoming hearings, which you have stated will focus exclusively on radicalization among Muslim Americans and homegrown terrorism. We agree that Congress and all levels of government have a duty to protect America from terrorism, whether from abroad or homegrown.  We are, however, deeply concerned that the stated narrow scope and underlying premises of these hearings unfairly stigmatizes and alienates Muslim Americans.  We ask that you reconsider the scope of these hearings and instead examine all forms of violence motivated by extremist beliefs, rather than unfairly focusing on just one religious group.

We believe that the tone and focus of these hearings runs contrary to our nation’s values. Muslim Americans contribute to our nation’s wellbeing in many professions including as doctors, engineers, lawyers, firefighters, business entrepreneurs, teachers, police officers and Members of Congress. Their hard work helps to make our country exceptional.

Furthermore, casting a negative light on an entire community — rather than focusing on actual dangerous fringes will only strain community relationships and trust that local, state and federal law enforcement agencies have worked hard to develop. Muslim Americans are an integral part of our larger American society and should be treated as such, not viewed with suspicion.

The choice between our values of inclusiveness and pluralism and our security is a false one.

If you wish to examine violent extremism, we ask that you do so by examining violence motivated by extremist beliefs in all its forms. Singling out one religious group and blaming the actions of individuals on an entire community is not only unfair, it is unwise– and it will not make our country any safer.