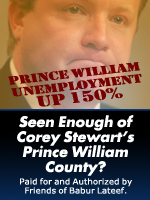 Great job by Democratic candidate for Prince William County Board chair, Dr. Babur Lateef, nearly matching Prince William County Board Chair (and chief county bully) Corey Stewart’s first quarter 2011 fundraising total of $161,995 (in 90 days vs. Lateef’s 71 days). Stewart’s ending balance was $222,186, compared to Lateef’s $117,788. Not a bad  start at all for Dr. Lateef – help him keep it up by clicking here and giving generously!

Woodbridge, VA — Dr. Babur Lateef, candidate for Chairman of the Prince William County Board of Supervisors, announced Friday his campaign raised $150,268.01 in the first three months of the year, despite his late entry into the race.

Candidates seeking election in November are required by the Virginia State Board of Elections to file quarterly, pre-election and post-election reports disclosing their campaigns’ contributions and expenditures.

Dr. Lateef noted over half of the contributions came from fellow doctors and medical offices, which encourages him.

“I’m running for chairman in order to serve the community that has given my family so much,” Lateef said. “I am humbled by so many doctors investing in my campaign to bring a new vision to Prince William County.”

Dr. Lateef, an eye surgeon from Woodbridge, announced his candidacy in late January and quickly established himself as an energetic challenger to current Chairman Corey Stewart, whose naked ambition for higher office has proven to be a disservice to Prince William County’s more than 400,000 residents.

“Corey Stewart can raise hundreds of thousands of dollars from individuals who have projects in front of the board,” McLaughlin said. “Our disciplined approach will result in a successful campaign.”

Dr. Lateef is seeking the Democratic nomination to replace Stewart, who is simultaneously running for re-election and the U.S. Senate seat being vacated by Sen. Jim Webb.

“Unemployment is up, class sizes are up, taxes are up and Corey Stewart thinks he deserves a promotion,” Lateef said. “I have a new vision for our county, one that serves our families and our future.”