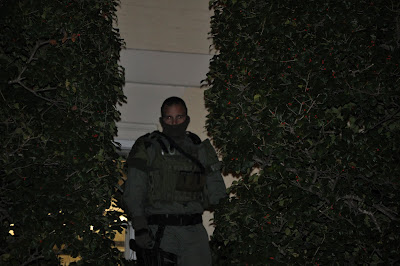 As if Del. Dave “No Sex Tonight” Albo’s little “comedy” routine” the other day wan’t revealing enough about Virginia Republican attitudes towards women’s health, well being, reproductive freedom, etc., how about the following two items?

First, as I noted in this morning’s news headlines, The Richmonder reports  on Bob McDonnell’s over-the-top reaction to last night’s “‘TAKE BACK THE RIGHT: Candlelight Vigil & Speak Out for Women’ at Virginia’s Capitol Square near the Governor’s Mansion.” That’s right, McDonnell called out “a fully armed and armored SWAT team member,” who JC Wilmore photographed “concealed in the bushes, perhaps 30 feet from the peaceful protestors.” As JC puts it, this was “a massive over-reaction by Capitol Police and a really disturbing attempt by the McDonnell administration to use the State Police SWAT team to intimidate peaceful protesters through the display of overwhelming force.”

Then, a bit earlier today, Virginia Republican legislators demonstrated equal contempt for Virginia women, passing “HB 462, which would mandate women seeking an abortion to submit to a medically unnecessary ultrasound and waiting period, inappropriately inserting partisan political agendas into the doctor-patient relationship.” See the Progress Virginia statement on the “flip” for more on that one.

In sum, Virginia Republicans’ attitude towards women in this state is this: we know best for you, so go home and keep your mouths shut. Fortunately, Virginia women won’t listen to them. Also fortunately, Virginia women VOTE, and presumably will make their displeasure known starting this November, and continuing through November 2013 (when we take back the governor’s mansion) and beyond. Nice job, Republicans!

This afternoon, the Senate of Virginia voted to approve HB 462, which would mandate women seeking an abortion to submit to a medically unnecessary ultrasound and waiting period, inappropriately inserting partisan political agendas into the doctor-patient relationship.

“We’re frankly aghast that conservatives in the State Senate have chosen to ignore the tens thousands of Virginians who stood up and spoke up to voice their opposition to these bills that substitute politicians judgment for that of a doctor,” said Anna Scholl, Executive Director of ProgressVA. “Over 33,000 Virginians told Governor McDonnell and the legislature that politicians should not play doctor and seek to shame women with medically unnecessary procedures and waiting periods.

It’s time for Governor McDonnell to put the desires and best interests of Virginians ahead of his national political aspirations and veto this bill.”