On June 14, George Allen tweeted the following thanks to Bishop E.W. Jackson, his former rival for the Republican nomination for U.S. Senate from Virginia. In the tweet, as you can see, Allen thanks Jackson for his support (Jackson endorsed Allen after he got crushed in the Republican primary on June 12) and promised to work with Bishop Jackson to bring “VA voice [sic] & values to Washington.”

So, what would those “VA voice [sic] & values” actually be? Well, if the email Bishop Jackson sent out this morning is any indication, it’s a truly frightening prospect. The full email’s on the “flip,” but here are a few highlights from Jackson’s foaming-at-the-mouth, deranged, Teahadist tirade.

*Jackson claims that our country needs to be “rescued from the evil clutches of those who want to take us down the path to socialist bondage and moral chaos.” Seriously, I’m not making this #$@#$ up. And no, it’s not The Onion, although it is pretty funny if taken as satire!

*Jackson actually likens the law improving health care for almost every single American to…wait for it cuz you knew this was coming from Bishop Crazy…”the Dred Scott decision because it denies our freedom and humanity.” Again, no, it’s not The Onion, but does George Allen want to bring these values to Washington, DC? Does he really want to be associated with a nutjob like this?

*Jackson claims this is all part of “a far left political agenda,” which is beyond laughable of course. In reality, “Obamacare” is nearly identical to “Romneycare,” and actually is less progressive than the 1993 Republican alternative to “Hillarycare.” And, as we all know by now, the “individual mandate” Jackson calls “far left” was actually a conservative Republican idea for two decades, until the party flip flopped the minute Democrats (largely at the urging of the private, for-profit health insurance companies) incorporated it into the Affordable Care Act. But whatever, details details…Bishop Jackson’s on a roll!

*Jackson then goes completely off the deep end, claiming that, among other things, “We are denied access to our natural energy resources” (yeah, right, that must be why oil and natural gas production are both up sharply during the Obama Administration), that “Our economy is being decimated” (in fact, that happened under George W. Bush and Republicans like George Allen; the Democrats are now busy trying to clean up the mess those guys made), even the John Bircher fever fantasy that “Our sovereignty is being surrendered to the United Nations.” Does George Allen agree with any (or all) of that lunacy? Does he plan to bring those values to Washington? What do you say, Felix? 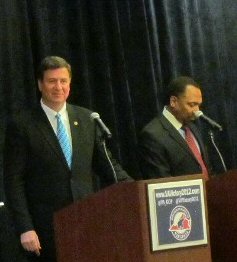 *Jackson even resurrects the beyond-insane “DEATH PANEL” (he puts it in ALL CAPS to make clear that HE IS REALLY ANGRY AND THAT HE IS SHOUTING AT US!) canard. Does George Allen agree with his ally Bishop Jackson that there are “death panels” in the Affordable Care Act? (note: in reality, there’s already rationing of care under our current system, based on whether or not you have insurance, how good your insurance is, and how much money you’ve got to pay for cutting-edge, often super-expensive treatments).

*Jackson doubles down, ranting on about some supposed “‘death pathway’ of euthanasia of the elderly” in England. He further claims that “If Obamacare is allowed to run its course, that is exactly what it will give us.” Does George Allen agree with this tinfoil-hat insanity?

I encourage everyone to contact the Allen campaign  (phone #: 804-726-2012) and ask them whether they agree with Bishop Jackson’s remarks, and whether they plan to bring these types of “values” to Washington DC in the unlikely event that George Allen is actually elected in November.

When I ran for the U.S. Senate in Virginia, I argued with every fiber of my being that this administration is trying to “fundamentally transform” America into something our Founders did not intend, our Constitution does not allow, the American people will never accept and God will never approve. We must have leaders who are citizen statesmen rather than career politicians. We need people who are not driven by personal ambition, but willing to make any personal sacrifice to see to it that our country is rescued from the evil clutches of those who want to take us down the path to socialist bondage and moral chaos. Many begged me not to quit but to keep speaking out, no matter what. I don’t intend to.

I intend to keep fighting, and I need your help. STAND with me. Americans need to be educated and awakened to the threat to our Constitution and our heritage. Please click here to make a generous tax deductible contribution to STAND to help me take my message across the Commonwealth of Virginia and across America.

On this very day the Supreme Court made one of the most devastating and obviously Unconstitutional decisions in history. I liken it to Roe v. Wade because it allows the unprecedented funding of abortion with federal tax dollars. I also liken it to the Dred Scott decision because it denies our freedom and humanity. The Court admitted that the exercise of the Commerce Clause to impose a healthcare mandate is a bridge too far for Constitutional reach. Justice Roberts then in the very next breath gives the administration authority to impose the mandate as a tax, an approach Obama has vehemently denied all along.

We have been repeatedly lied to in order to further a far left political agenda. Our Constitution is being disregarded. Our values are being denigrated. Our economy is being decimated. Our treasury is being raided. Our currency is being devalued. We are denied access to our natural energy resources. Our sovereignty is being surrendered to the United Nations. Our allies are insulted and abandoned and our enemies are emboldened, encouraged and funded. We are being divided and manipulated by race, gender, income and even business versus government.

This is the first administration in history to systematically ignore the Constitution whenever it gets in the way and refuse to enforce any law they do not like. We have been inundated with unconstitutional executive edicts, and unconfirmed czars have been given immense power over our lives.

Our military budget is being treated in a most dangerous fashion, while for the first time in our history, we hold gay pride celebrations in the Defense Department and the White House. I am sure you have seen the pictures of homosexual couples kissing in the White House under pictures of our Founding Fathers. This is arrogance at its most perverse and nauseating.

Until we have leaders who believe in our country, our values, our free enterprise economy and our way of life, the emergency will continue and the crisis will deepen.

I AM TAKING A STAND. I INTEND TO KEEP FIGHTING AND I NEED YOUR HELP. AMERICANS NEED TO BE EDUCATED AND AWAKENED TO THE THREAT TO OUR CONSTITUTION AND OUR HERITAGE. PLEASE CLICK HERE TO MAKE A GENEROUS TAX DEDUCTIBLE CONTRIBUTION TO STAND TO HELP ME TAKE MY MESSAGE ACROSS THE COMMONWEALTH OF VIRGINIA AND ACROSS AMERICA.

In light of the Supreme Court’s ruling on the Affordable Care Act, the situation has just grown much worse. This has been rammed down our throats, but still nearly 40% of the American people think it is a good thing. They do not realize that healthcare costs for most Americans are going up; the quality is going down; the Independent Payment Advisory Board (DEATH PANEL) will be determining who lives and who dies among the elderly and chronically ill; the shortage of Primary care Physicians will worsen; waiting lines will lengthen and more Americans will suffer and die.

This has been tried in Great Britain. According to Professor Patrick Pullicino, The Liverpool Care Pathway [LCP], a method of looking after terminally ill patients in hospitals in England, has turned into a “death pathway” of euthanasia of the elderly. It can include withdrawal of treatment, water and nourishment. On average a patient turned over to LCP dies in 33 hours. No doubt leftists in America find this very efficient and cost effective. There are around 130,000 deaths of patients who were on the LCP, about 29% of all patients committed to British hospitals. That is a staggering number. Professor Pullicino claims that elderly patients who could live longer are put on an “assisted death pathway rather than a care pathway.”

Is that what we have to look forward to in America? If Obamacare is allowed to run its course, that is exactly what it will give us. We cannot let that happen. Add to the medical nightmare that the IRS will now be combing through our tax returns and private lives to force us to comply with the law.

WILL YOU TAKE A STAND WITH ME? I INTEND TO KEEP FIGHTING AND I NEED YOUR HELP. AMERICANS NEED TO BE EDUCATED AND AWAKENED TO THE THREAT TO OUR CONSTITUTION AND OUR HERITAGE. PLEASE CLICK HERE TO MAKE A GENEROUS TAX DEDUCTIBLE CONTRIBUTION TO STAND TO HELP ME TAKE MY MESSAGE ACROSS THE COMMONWEALTH OF VIRGINIA AND ACROSS AMERICA.

Our country needs us to STAND together to fight for our freedom. Thank you for being willing to join the battle. God bless you, and may He always bless the United States of America.