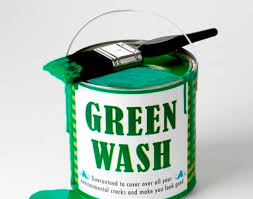 In our last column, we looked at Virginia’s renewable energy standard, trying to grab hold of its 15% goal as it shrank three sizes in the greenwash. At the end of that discussion, you may have consoled yourself with the thought that 10% or 5% or 3% is, at least, better than nothing. Besides which, the law is only voluntary, so how much harm can it do?

“Voluntary” has such a nice ring to it, doesn’t it?  You probably think it has something to do with customers deciding whether to participate. You might think it’s for those virtuous people who sign up to buy “green” power, and the rest of us will just go on burning coal.

That is not what voluntary means at all. “Voluntary” means your utility gets to choose whether to participate, and then you have to go along with it. The law says that if your utility opts in, it will spend some of your money on renewable energy, and then because it did all that work, you have to add a big tip to your utility bill.

I suppose, in theory, a utility like Dominion Power might decide it didn’t want to spend your money, and it could just skip the fat tip. In reality, refusing a tip isn’t part of a corporation’s DNA any more than it is of a waiter’s. Tom Farrell’s momma didn’t bring him up to be a fool who leaves money on the table. So our voluntary RPS is kind of like one of those annoying restaurants where they automatically add the tip to the bill for parties of six or more.

In this case, the tip adds up to more than $38 million per year. Mind you, this is on top of the profit they had already added to your bill. This is a very lucrative line of business.

Well, you might think, at least I got fed. You like renewable energy, after all. It replaces smog-causing fossil fuels. It lowers our carbon footprint. It creates jobs and enhances our national security. A utility shouldn’t have to be bribed into buying it for you, but at least now it’s part of the meal.

But look more closely. If that renewable energy were food, you’d send it back. You assumed you were getting fresh, Virginia-grown electrons, made with the sun and the wind-and what is this stuff they are serving? Energy from dams, trash and wood, most of it fifty years old or more, of such poor quality that no other state will let it be served to their customers. They only call it “green” because it’s practically moldy. (And such small portions!)

You call your utility over and demand an explanation. “Where’s the wind energy? Where’s the solar? Why isn’t this fresh and local?” And your utility looks down its nose at you and answers, “Those things cost more. We have an obligation to be careful of your money. So for you, we go dumpster diving.”

At that point, you might be glad the renewable energy portion of your meal barely amounts to a garnish. The trouble is, you can’t take your business elsewhere. Your utility has a monopoly, and it guards your patronage jealously. So you’re stuck with the meal they serve you. The closest you’re going to get to real renewable energy is the picture of a wind turbine on the cover of the menu.

It’s only now that you notice an asterisk by the wind turbine and fine print that reads: “Coming soon!” And below that, in print so tiny you have to reach for your glasses: “Or not.”