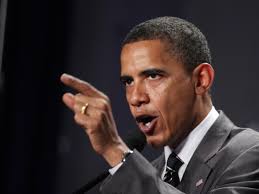 Immediately after watching the President’s forceful remarks after the Senate failed to pass the gun bill, I posted, with some enthusiasm, about his statement:

I’d have had him stress these points more than he did, but he did come out swinging. Which is what we need from him.

Then I got to wondering:  maybe Obama should have given some of that speech BEFORE the vote, rather than after. By talking about how the gun lobby was “willfully lying,” and how the Republicans were poised to thwart the will of the American people, perhaps he could have changed the field of forces enough to get the bill passed.

Maybe he could have. But then I saw that doing it AFTER, as he did, was what I would have advised.

Why? Because the bill itself was not all that much of an accomplishment. Yes, it would constitute “progress,” but very minor progress: how big a deal could it be if Wayne LaPierre was all for it back in 1999?* Besides which, even if it passed in the Senate, how likely was it that it could get past the Republican-dominated House?

So getting the bill passed through the Senate isn’t something that should be given overwhelming weight.

On the other hand, USING THIS FAILURE TO STRIKE A BLOW against the destructive force– that’s important.

My guess is that President Obama was thinking that way in coming up with his strategy.

If one looks at his remarks, they are strongly geared to the idea of people getting passionate enough, and organized enough, to influence the elections coming up. All the talk was about the gun issue, and changing the nature of the political forces on the politicians. But the EFFECT would inevitably be broader.

If we replace all those politicians who vote with the willful liars on this issue, we drain away Republican power. My guess is he went out there thinking not just of the gun issue, and not just of the Senators who voted wrong, but of 2014 and the need to end Republican control of the House of Representatives.

After all, what can be accomplished in this country so long as John Boehner’s caucus has to sign off on any legislation that gets enacted.

Striking the blow using an issue on which 90% of the American people are on the president’s side is good. But the blows of this sort have to keep coming, which means that he cannot require that kind of overwhelming public support on every issue that he employs.

But choosing the long-term politics over the immediate legislation looks to me like the strategically right choice.

* I would like to ask: why is it that LaPierre and the NRA worked to defeat in 2013 what we can see on video that LaPierre supported in 1999? My guess is that a good answer would tell us something important about what’s happened in the realm of politics –about the rise of the “It”– in the intervening fourteen years.