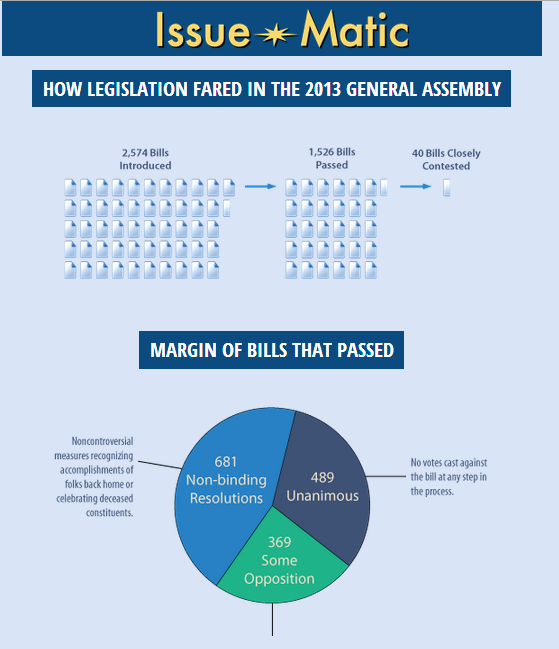 In general, I think the Virginia Public Access Project (VPAP) does excellent work, especially given their small budget and staff levels. And, at first glance, these infographics (see to the right – click to “embiggen” – and on the “flip”) are no exception. However…I’ll get to why they’re not just misleading, but highly misleading, in a minute. First, though, if you just look at these graphics quickly, what you’d conclude is that the 2013 Virginia General Assembly wasn’t nearly as  vicious, nasty, embattled, etc., as most of us probably thought it was. Thus, according to VPAP, only 40 bills out of 2,574 (1.5 percent) introduced, and 40 bill out of 1,526 bills passed (2.6 percent) were “closely contested.” The rest of the bills that passed were either non-controversial binding resolutions (681 of those), ones that passed unanimously (489 of those), or ones that passed with 60% or greater support (329 of those). Sounds great, right?

There’s just one problem with this analysis, and it’s a big one. I spoke with Del. Scott Surovell a few minutes ago, and he explained it to me as follows: “Analyzing data like this would be like looking at Sudan from 60,000 feet and not seeing ethnic cleansing going on.” Why is that? Simple. As Del. Surovell explains, going from the original 2,574 bills introduced down to 1,526 bills passed, the vast majority of the 1,048 bills that died (or were “carried over,” etc.) met their fate in unrecorded committee votes. And when Del. Surovell says “unrecorded,” he means it in both senses: no audio or visual recordings of the proceedings, and no record of votes cast. That basically means there’s zero sunshine on the process where many good bills, and probably a lot of bad ones too, get weeded out. If you ignore all that, it’s no wonder you could conclude that things look pretty cordial down in Richmond.

By the way, it’s particularly revealing that efforts – including by Del. Surovell – to require that committee votes be audio or video recorded, and/or that a record be kept of who voted which way in committee, have gone nowhere in the Republican-controlled House of Delegates. The question is, why don’t Speaker Bill Howell and all his corporate buddies from ALEC, etc. want the public to know what’s going on underneath the dark, slimy rocks of the General Assembly? Gee, I can’t imagine! 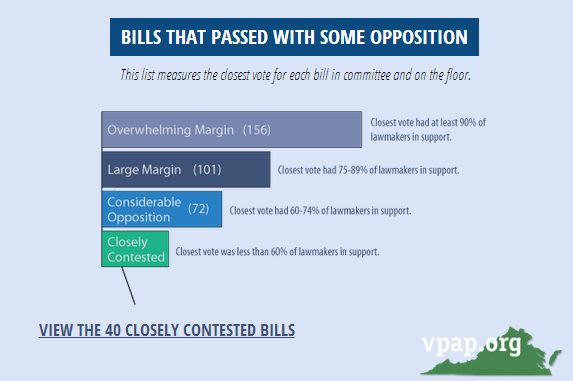