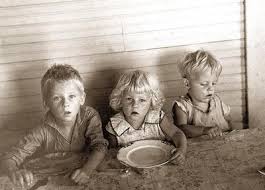 What should one make of the fact that some of the same Republican politicians who make a major issue out of “protecting the unborn” also are eager to cut the food stamp program (SNAP) that keeps millions of American children from going hungry?

If a person had it in his heart to care about unborn children, would one not expect that same heart to show compassion for the plight of children already born?

If one is truly moved at the need to protect “innocent” life in the womb, would one not be moved equally by the need to protect from hunger the more than 1 in 5 children in America who, through no fault of their own, live in poverty? (At a time when America is still suffering from the severest economic downturn since the Great Depression, even a great many of the parents of these children are facing hard times through no fault of their own.) Are these children not equally “innocent”?

Can there be any good reason why a person would care about the unborn but be indifferent to the already-born?

I make a distinction these years between the average people who involve themselves in the cause of opposing abortion rights and the politicians who push this issue into the spotlight. I’m inclined to grant that the average anti-abortion activist has some genuine feeling about what they see as the innocent human life in the womb.

But the effort by so many Republicans in Congress to gut the food stamp program, particularly in these hard times, shows pretty clearly that a lot of these politicians don’t really care about the unborn.

Clearly they must be using the abortion issue for some altogether different reason.