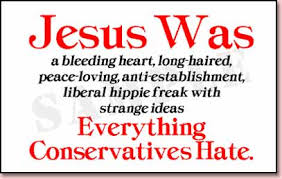 On my website, a long-time reader who is a conservative Christian (but one who no longer has any regard for the Republicans and who sticks with my website, and even contributed to my campaign, though his disdain for liberals is frequently expressed) conjectured earlier today about”some weakness in the spirit make-up that creates the ‘liberals’ seeming need for a more than natural protective society.”

To him I replied:

It’s Liberalism doing what every actor should do: work to make America the best society it can be.  Is it not clear that the ideal America is a society and nation that creates certain degrees of community feeling, and a certain commitment to the well-being of all, and not some hostile rejection of things being done to help the LOSERS. It is not just the Ayn Rand part of the right that seems to place no value on a sense of community in our approach to national problems.

Lacking, too, is a respect for those things that can’t be accomplished separately – and also for purposes that go beyond selfishness – but can be achieved only through the system we created to enable us to act together:  i.e, the government.

The problem isn’t any liberal “weakness”:  The liberals at their best at least are working creatively to create a society that serves the good as best it can, with wise trade-offs one hopes, and with an inevitable mixture of success and failure.

But we sure are a whole lot better a society than we would have been without Social Security, and Medicare and Medicate, and environmental regulation, and the civil rights legislation of the 1960s.

All of those are expressions of the liberal spirit, and the net result of them is that this country is a far better place in a great many ways because these were accomplished.

It is very good for America and for all of us that this spirit had so much sway in the shaping of America’s destiny that it did in the most critical years of 1933 up until maybe 1981.

I see the problem as being more on the right, as with every other issue we face in America today that I can think of.

Liberalism’s dominance gave us the time during which  Henry Luce, the man behind Time Magazine, spoke of “the American century.”

This was a time not only of national greatness and high prestige, but it was also a time when absolutely essential changes started getting made to make our nation at least something like a humane place.

In particular, I see here some lack of moral and spiritual integration.  And this force that’s taken over the conservative part of America exploits the brokenness in people. How else to explain good Christians pushing to make American citizens more vulnerable even while, in a great many respects, the citizens of the United States are far more exposed, more vulnerable, less protected, more left on his own, less assured of a net to catch him, than the citizens of any other advanced society.

Conservatives in other advanced societies embrace policies on government being there to support people in their lives — with health care, with education, with maternity and paternity leave, with a safety net better than ours — that might put them to the “left” of the average Democratic member of Congress.

What sense is it to be more concerned that we’re moving too much in the direction of a “protective society,” when we’re already an outlier in that direction.

A decent respect for the opinion of humankind, which our Founders called for in the Declaration of Independence, would have us credit peoples as free and educated and decent as ourselves with some intelligence when they make their choices about how far to go in the direction of protection, to be the best society you can be.

Nonetheless, if today’s Republicans got their way – and they often do, as on the cutback on Food Stamps during hard times for a good proportion of America’s families, especially the most vulnerable — Americans would become still more vulnerable.

No, the problem is not with the liberals, it’s with some sort of defect on the right– apparently some sort of complete rejection of interdependence in favor of an “every man for himself” kind of social world.

What happened?  How did culture create that on such a wide scale that virtually millions were ready to soak up the poisons against the more vulnerable parts of our society put out there by the likes of Limbaugh and Gingrich?

Was the experience in the family one that impressed deeply idea that in this world, it’s every man for himself?  Did one receive contempt and hostility when one expressed one’s vulnerability and need, so that one learned how to strike at those in the vulnerable position of supplication.

Even many who feel strongly, and sincerely, that they are champions of Christianity against the godless liberals, are surprisingly unlike Christ in their basic attitude toward the vulnerable.

Many of them, like the nabobs of false righteousness that run Liberty University down in Lynchburg (VA), are far more attuned to the very kinds of powers that Jesus, and before him John the Baptist, decried for their sins.

Contempt for the meek and embrace of the liars and hypocrites and exploiters. The very opposite of the position Christ took in relation to the needs and the sins of the people of his time.

If the combination of big Christian posture and very unChristian conduct (as is true in more profound ways, about Liberty University) is not a clear sign of brokenness, I don’t know what would be.

But the Christian problem here aside, one can pretty well assume something emotionally important, something that imparted a kind of brokenness,impacted these people. The results are visible in an excessive insistence on autonomy for everyone, and a punitive attitude toward those who don’t measure up.

One learned, my conjecture continues, that one had to measure up, even if that required one to cut oneself off from awareness of the pain of the experience. We can assume it would be painful to learn that vulnerability gets punished, and that dependence is to be looked upon as a weakness.

The child is by design vulnerable and weak. How the child is treated sets the template for how the weak and vulnerable will be regarded henceforth.  Which way it goes will depend on which actor in the scene the person ends up identifying with– himself, or the harsh parent. Identification with the aggressor is a well-known dynamic, and it comes out of experiences that are too harsh to be integrated into a whole self. The escape to identifying with the one who strikes the blow gives one distance from the blow.

I believe that a whole lot of the attitude on the American right toward helping the vulnerable is the fruit of a widespread experience of that sort, growing up, reinforced then by the orthodoxies of belief that become sown into the ideology that corresponds with the emotional pattern.

Anyway, that’s how I envision the origins of this attitude, which I’ve encountered many times conducting conversations with conservative callers on my radio programs, every time the any issue having to do with helping the weak and the vulnerable comes up.