The big news of the week in Loudoun is the filing of the recall trial petition against Supervisor Eugene Delgaudio. (Well, the big news unless you’re Leesburg Councilmember, and perennial Mayoral candidate, Tom Dunn.) The filing triggers a process clearly outlined by statute, and ably explained by the ever-cogent blogger at Real Loudoun. One thing that has been lost in the shuffle of this week’s machinations, however, is the fact that the recall action was largely made necessary because of something that happened in Richmond earlier this month.

You may recall that the only reason Supervisor Delgaudio was not indicted by the grand jury is that he qualifies as a “part-time” elected official, and as such can – apparently – do whatever he wants with public time and assets without any legal penalties. The grand jury at the time took the remarkable step of calling upon the Virginia General Assembly to change the law removing the Delgaudio “part-time” Loophole as soon as possible. Indeed, that recommendation was the very first recommendation in the Grand Jury’s report.

If you’re wondering whatever happened to that recommendation, here’s your answer.

At the beginning of this year’s General Assembly session Delegate Randy Minchew dutifully introduced HB 420, a bill specifically designed to close the Delgaudio Loophole. The Grand Jury’s recommendation was on its way to being implemented. Loudoun and Virginia could breath a sigh of relief that while Supervisor Delgaudio got through the loophole, others would not be so lucky.

But a funny thing happened on the way to ethics, transparency and accountability. Namely, Republican control of the House of Delegates. In an all-too-common move, the Mr. Minchew’s bill to close the Delgaudio Loophole and implement the Grand Jury recommendation was quietly killed in his own Courts of Justice committee. That’s what “laid on the table” means in the language of parliamentary procedure. 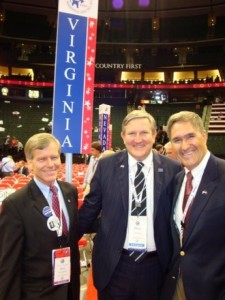 Now, there is another bill that would do the same thing in the House of Delegates, HB252. This one introduced by Democratic Delegate, Scott Surovell. Del. Surovell is not confident of his bill’s chances of surviving the subcommittee to which it has been assigned within Courts of Justice because, “they already killed Randy’s bill and Randy is a Republican.” That is an important point. Randy is an influential Republican legislator, recall he got his start as a “Counselor” to Gov. Rolex – I mean McDonnell. Either he has a lot less influence then he tells his constituents in the 10th Delegate District, or he really didn’t want his bill, HB420, to proceed.

Either way, Republicans have, once again, talked a lot of hot air about accountability and reform, but when put in a position to actually affect meaningful change that would curb the abuses of the past few years, they delay and quietly destroy important reforms. From the Board of Supervisors, which issued a six-month finger-wagging to Eugene Delgaudio before fully reinstating him to his privileges on the Board, to legislators in Richmond, who see nothing wrong with Gov. McDonnell accepting hundreds of thousands of dollars in gifts from major campaign donors seeking governmental imprimatur for their questionably-effective sovereign tonics, the political system here in Virginia seems to intrinsically dodge accountability when Republicans are in charge.

And so, in spite of a year of bombshell revelations in the press, a damning grand jury report,  promises of action, and censure by the Board of Supervisors, Eugene Delgaudio remains a Supervisor with the full faith and confidence of his Republican colleagues. And the legal loophole that allows him to continue to misuse public assets (if he chooses to do so, and why wouldn’t he, given the complete lack of real consequences he’s faced from his fellow Republicans) remains wide open.

So, for those who ask why Sterling Citizens filed their recall petition against Eugene Delgaudio this week, I humbly suggest that it was the one path to accountability remaining to the people of Sterling who have been ignored and mis-represented by their Supervisor for long enough.