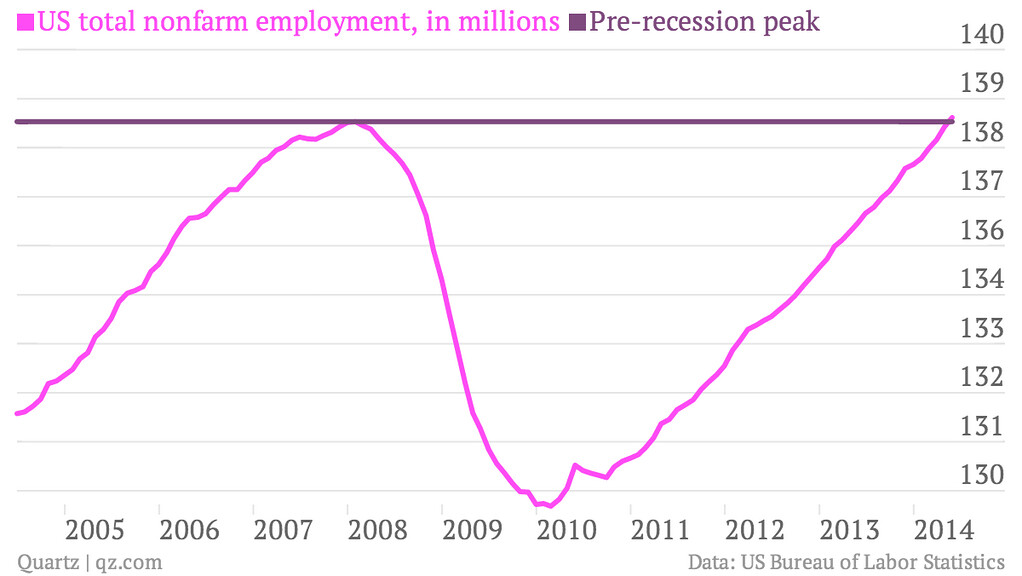 From the Bureau of Labor Statistics:

THE EMPLOYMENT SITUATION — MAY 2014

Total nonfarm payroll employment rose by 217,000 in May, and the unemployment rate was unchanged at 6.3 percent, the U.S. Bureau of Labor Statistics reported today. Employment increased in professional and business services, health care and social assistance, food services and drinking places, and transportation and warehousing.

The unemployment rate held at 6.3 percent in May, following a decline of 0.4 percentage point in April. The number of unemployed persons was unchanged in May at 9.8 million. Over the year, the unemployment rate and the number of unemployed persons declined by 1.2 percentage points and 1.9 million, respectively. (See table A-1.)

Among the major worker groups, the unemployment rates for adult men (5.9 percent), adult women (5.7 percent), teenagers (19.2 percent), whites (5.4 percent), blacks (11.5 percent), and Hispanics (7.7 percent) showed little or no change in May. The jobless rate for Asians was 5.3 percent (not seasonally adjusted), little changed

Among the unemployed, the number of job losers and persons who completed temporary jobs declined by 218,000 in May. The number of unemployed  reentrants increased by 237,000 over the month, partially offsetting a large decrease in April. (Reentrants are persons who previously worked but were not in the labor force prior to beginning

The number of persons employed part time for economic reasons (sometimes referred to as involuntary part-time workers), at 7.3 million, changed little in May. These individuals were working part time because their hours had been cut back or because they were unable to find a full-time job. (See table A-8.)

In May, 2.1 million persons were marginally attached to the labor force, essentially unchanged from a year earlier. (The data are not seasonally adjusted.) These individuals were not in the labor force, wanted and were available for work, and had looked for a job sometime in the prior 12 months. They were not counted as unemployed because they

had not searched for work in the 4 weeks preceding the survey. (See table A-16.)

force in May had not searched for work for reasons such as school attendance or family responsibilities. (See table A-16.)

Professional and business services added 55,000 jobs in May, the same as its average monthly job gain over the prior 12 months. In May, the industry added 7,000 jobs each in computer systems design and related services and in management and technical consulting. Employment in temporary help services continued to trend up (+14,000) and has grown by 224,000 over the past year.

compared with an average gain of 7,000 per month over the prior 12 months.

Within leisure and hospitality, employment in food services and drinking places continued to grow, increasing by 32,000 in May and by 311,000 over the past year.

Transportation and warehousing employment rose by 16,000 in May. Over the prior 12 months, the industry had added an average of 9,000 jobs per month. In May, employment growth occurred in support activities for transportation (+6,000) and couriers and messengers (+4,000).

Manufacturing employment changed little over the month but has added 105,000 jobs over the past year. Within the industry, durable goods added 17,000 jobs in May and has accounted for the net job gain in manufacturing over the past 12 months.

After revision, the change in total nonfarm employment for March remained +203,000, and the

change for April was revised from +288,000 to 282,000. With these revisions, employment gains in March and April were 6,000 lower than previously reported.