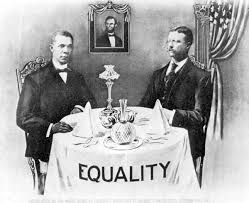 People on the right take umbrage these days whenever anyone talks about racism. But of course, in these unfortunate times, they take umbrage at the mention of most aspects of reality.

So a propos of racism, I thought it might be useful to look at this little bit of history, from a bit more than a century ago, depicted by Doris Kearns Goodwin in her excellent book — The Bully Pulpit — about Theodore Roosevelt, William Howard Taft, and the progressive journalists who helped make that an era of political progress. Here’s a quote from page 321:


“[S]outhern Republicans had never forgiven [President Theodore Roosevelt for the unprecedented dinner invitation extended the previous fall to the black educator Booker T. Washington.  At the time, the vehement reaction in the South had stunned and saddened Roosevelt. Newspaper editorials throughout the region decried the president’s attempt to make a black man the social equal of a white man by sharing the same dinner table. ‘Social equality with the Negro means decadence and damnation,’ announced one southern official. ‘The action of President Roosevelt in entertaining that nigger will necessitate our killing a thousand niggers in the South before they will learn their place,’ declared South Carolina’s [U.S. Senator] Ben Tillman.”

(Whatever else Senator Tillman’s statement meant, it certainly signals as clearly as could be that terror was the instrument of choice in the South to maintain the regime of racial tyranny and oppression.)

I’ve written before about “the persistence of culture.” (That’s the idea that the patterns embedded in a culture tend to continue — to succeed in transmitting themselves — over long periods of time.)

Do you suppose that response to a president’s having invited a black man to dine in the White House in 1901 has anything to do with how some Americans have responded, since 2009, to the black man that’s now actually the President of the United States?