This piece will be appearing — probably this week — in a couple of the newspapers in my very conservative 6h congressional district. 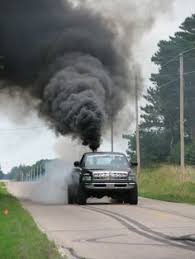 How did it come to this? How did our political life in America get to be so drenched in hostility?

While reading an article about how “anti-environmentalists” are spending thousands of dollars to alter their vehicles to increase the smoke they produce, I came across this statement from one of that group, who call themselves “coal rollers”: “If [Obama’s] into the environment, if he’s into this or that, we’re not.” And it’s not just the president they’re hostile to, it’s also those Prius-driving “librels” who, according to the article, might be specially targeted with a blast of smoke and soot.

How did “if they’re for it, I’m agin it” get to poison our politics. That is, after all, what’s happening in Congress in the past few years, isn’t it?

Just as the “coal rollers” would rather express their hostility than have clean air and less cancer, so also the Republicans in Congress would rather reject whatever the president proposes than work to get anything accomplished for America. That’s how this Congress is the least productive in living memory. Much less. And anyone who thinks a do-nothing Congress is good for America has no idea of how it is this nation became the great country that we were born into.

I’ve got a question for the conservatives who support this politics of hostility and spite: What’s so terrible about the liberal half of America?  Has the role of liberalism been so hideous as to warrant only contempt?

The era when liberalism was ascendant made America a better society in important ways. Isn’t it appropriate for conservatives to regard liberals as decent Americans, with a respectable point of view?

And one more: Would you prefer an America whose citizens are the only ones among the advanced democracies who cannot count on decent health care?

Yes, let’s talk about the Affordable Care Act-Obamacare, if you prefer. For some years, now, one has heard from Republican politicians that there’s something extreme about that legislation to reform our healthcare system.

But how can it be extreme? Obamacare is a Republican solution to a serious national problem.

Serious, because we’ve been paying twice as much for health care than any other nation, and yet our system for delivering good health care to our citizens isn’t even ranked in the top two dozen. Unreformed, our system was in the process of bankrupting families, businesses, and the government. Something clearly needed to be done. Republican, because it’s based on an idea that came from the very conservative Heritage Foundation, that was first proposed by Republicans in the Senate back in the 1990s, and that was implemented in a statewide form in Massachusetts by a Republican governor.

Besides, every other decent country has something like Obamacare or even more.

Clearly, there can be nothing extreme about this Republican approach to health care reform. What’s extreme is what the Republicans have done with it.

While the Republicans in Congress were refusing to pass legislation to address our other challenges, they found time to repeal Obamacare some fifty times-a spectacle unprecedented in American history. They told their followers one falsehood about it after another (think death panels), whipping people up into a fury.

(By the way, the new system — having survived the website’s lousy first roll-out — is working rather well. The number of Americans without any insurance has dropped precipitously, and the overwhelming majority of American affected by the law say they are better off because of it.)

Why the rage? Since when is it the American way to hate people with a different, but reasonable, view of how to make our nation better?

Not since the era of the Civil War has one big part of America expressed such hostility toward another big part of America. And if we think about the wounds inflicted on the nation then – wounds that have not altogether healed still, after a century and a half – we should not be sanguine about the consequences of this politics of hostility in our times.

This is not how America was in the America I grew up in. This is not the way America is supposed to be. We’re all in this together.