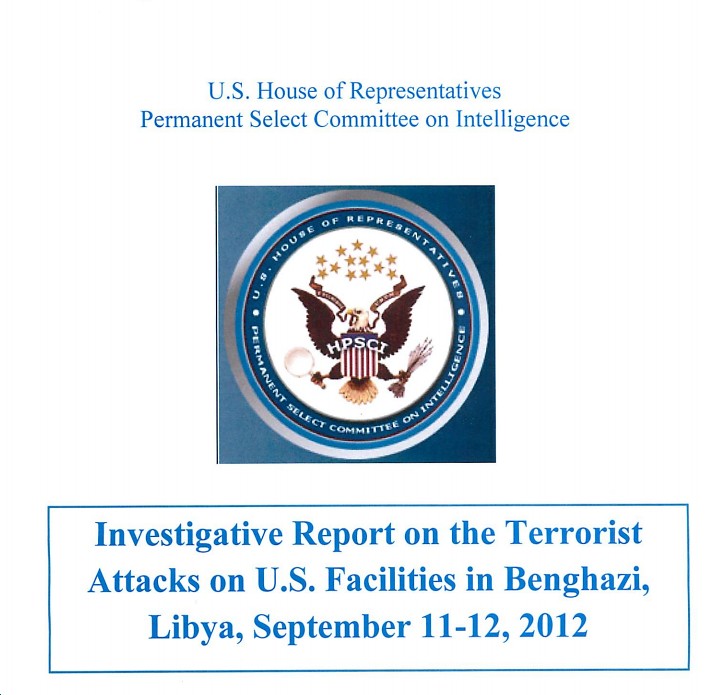 So, now that the Republican-controlled House Permanent Select Committee on Intelligence has TOTALLY debunked all the right wingnuts’ conspiracy theories on BENGHAZEEEEEE, what do they have left? First, a few quick points from the report on Benghazi by (again) Republican-controlled House Permanent Select Committee on Intelligence. (attention Frank Wolf and other crazy conspiracy theorists, you might want to read this, as it is meant to be the “definitive House statement on the Intelligence Community’s activities before, during and after the tragic events that caused the deaths of four brave Americans”)

*”There is no evidence of an intelligence failure…CIA provided sufficient security personnel, resources, and equipment to defend against the known terrorist threat and to enable CIA operations in Benghazi…no evidence that the CIA turned down requests for additional security resources at the Annex.”

*”…the Committee found no evidence that there was either a stand down order or a denial of available air support.”

*”…the Committee found no evidence that any officer was intimidated, wrongly forced to sign a nondisclosure agreement or otherwise kept from speaking to Congress, or polygraphed because of their presence in Benghazi.”

*”Appropriate personnel on the ground in Benghazi made the decision to send CIA officers to rescue the State Department officers at the TMF…no officer at CIA was ever told to stand down.”

*”The decision to send CIA officers from Tripoli to Benghazi to rescue the Ambassador and bolster security of the U.S. personnel in Benghazi was a tactical decision appropriately made by the senior officers on the ground.”

*”The CIA received all military support that was available. One CIA security officer requested a Spectre gunship that he believed was available, but his commanding officer did not relay the request because he correctly knew the the gunship was not available.”

*”…intelligence assessments continue to evolve to this day, and the investigations into the motivations of the individual attackers are still ongoing.”

*”For her public comments, Ambassador Rice used talking points developed at the request of HPSCI.”

*The “CIA, NCTC, FBI and other Executive Branch agencies fully cooperated with the Committee’s investigation.”

In sum, basically none of the charges leveled in the aftermath of Benghazi by Republicans have proven to be correct. Just as most of us outside the Fox/Rush/Glenn right-wing news bubble figured all along. I just wish the Republican-controlled House Permanent Select Committee on Intelligence hadn’t dumped this report late on a Friday before Thanksgiving, clearly hoping that it would get as little attention as possible. Of course, if the media were responsible, they would give this report as much (or more) attention as they gave to the hysterical, false accusations hurled around by the likes of Mitt Romney, John McCain, Lindsey Graham, Frank Wolf, etc. in the aftermath of this tragedy. Oh, and we’re also “all ears” for apologies from Romney, McCain, Graham, Wolf et al. Nope, not holding our breaths…

Anyway, now that the BENGHAZEEEEE conspiracy theories have been definitively debunked, by Republicans no less, what will the next crazy conspiracy theory by the frothing-at-the-mouth right wing be?  Well, there’s always one of the people Mitt Romney went out of his way to praise for helping develop “Romneycare,” Jonathan Gruber, an MIT academic who apparently thinks everyone other than himself is an idiot (but why any of us should care what he thinks is beyond me). Then there’s Ebola, of course, but that’s so three weeks ago!  Then there’s the latest OUTRAGE — amnesty! tyranny! can we go back to birth cerficates or “death panels?” 😉 I mean, Fox, Rush, Glenn, etc, have to have SOMETHING to rant about, right?

Friday News: Trump “Has No Plan to Get [U.S.] Out of Pandemic”; #SupremeLoser; “The Deadly Delusions of Mad King Donald”; “Joe Biden and Bernie...