This is wrong on almost every level. “Creation of 40,000 jobs?” That’s wildly untrue, been debunked over and over again (e.g., see here). In fact, according to a report by Cornell University researchers, “”The construction of KXL will create far fewer jobs in the US than its proponents have claimed and may actually destroy more jobs than it generates.” As for having “no serious impact on the environment,” to the extent Keystone XL encourages tar sands development (which is kind of the entire point, you know?), it will be very bad environmentally. Want to see what it looks like? Click here and check out what’s been called “the most destructive project on earth.” And don’t forget the health impacts, which are nasty as well. For more, see Bird deaths reported on Alberta oil sands tailing ponds and Federal study says oil sands toxins are leaching into groundwater, Athabasca River. Also see Keystone XL pipeline may threaten aquifer that irrigates much of the central U.S.. We could go on all day, but the bottom line is that Jim Webb is wildly wrong about this, just as he’s wildly wrong in ignoring/minimizing the #1 threat to humanity (and to many other species) – anthropogenic global warming. That alone should eliminate him from consideration by anyone who cares about the environment, or really any progressive. 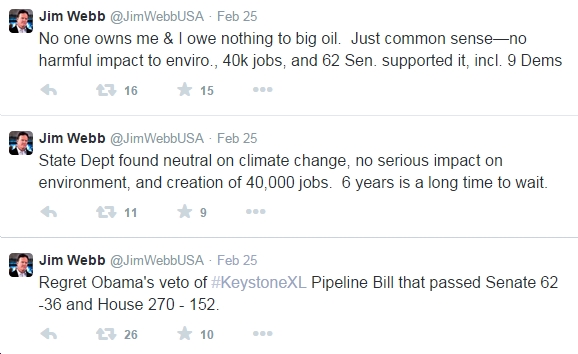