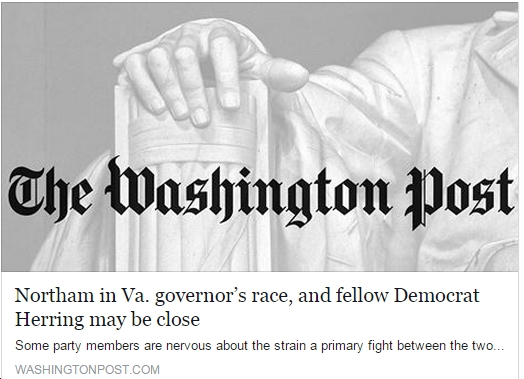 It’s late, but just a few quick thoughts on this news. First, it’s waaaaaaaayyyy too early to start a race for 2017, when we’re just two months into 2015, and just over a year after Terry McAuliffe, Ralph Northam and Mark Herring were sworn in as Governor, Lt. Governor and Attorney General, respectively. I mean, I agree with Northam that “if you’re gonna run for governor, you can’t do it at the last minute,” but February 2015 is far from the “last minute” for a Democratic primary in June 2017.

Second, our focus this year, now that the General Assembly session is winding down, needs to be on taking back the State Senate, with a secondary goal of picking up seats in the House of Delegates, not on starting a contest between Northam and Herring (and whoever else) for 2017.

Third, after 2015 we need to focus on making sure the Democratic nominee for President carries Virginia in 2016, and also on hopefully beating Barbara Comstock, maybe Scott Rigell and others as well. Again, we should NOT be focusing on the 2017 governor’s race when we have other, more pressing things to worry about.

Fourth, it seems to me that the AG’s office is a much stronger platform to get stuff done than the LG position, unless perhaps the Senate is evenly divided and the LG gets to break a lot of ties (which hasn’t been the case this year). Thus, over the past year, we’ve seen AG Herring in high-profile cases dealing with immigration (e.g., Virginia attorney general declares ‘dreamers’ eligible for in-state tuition) and marriage equality — issues with great appeal to the “base.” Perhaps that factored into why Northam felt the need to jumpstart this race so soon?

Finally, I’m not sure it bodes well for a unified Democratic Party heading into 2017 that Northam hadn’t “discussed my next step” with Herring. I don’t get that one at all.