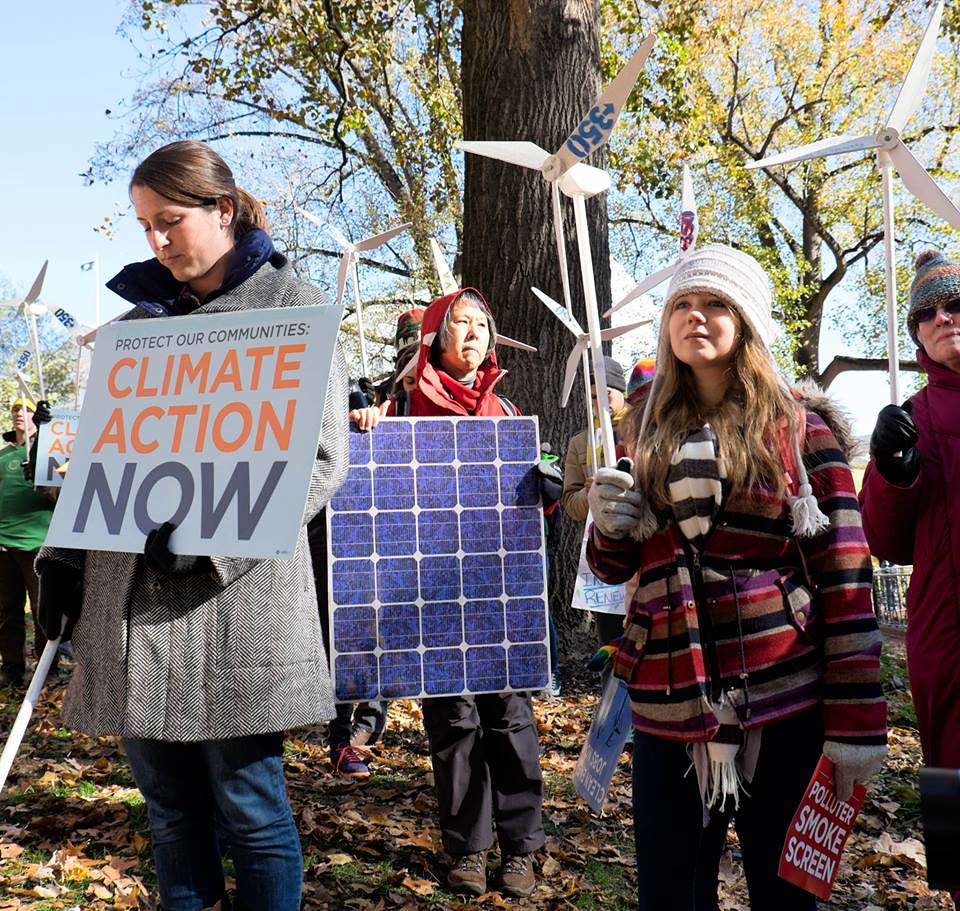 More than a hundred representatives of energy efficiency and renewable energy businesses descended on Richmond Tuesday for Clean Energy Lobby Day. After meetings with legislators, many of them stayed to attend a critical subcommittee meeting where most of this year’s clean energy bills came up for votes. And they came away with one overpowering impression: the only bills that can make it out of committee are the ones supported by the state’s utilities, especially Dominion Power.

But that wasn’t quite the end of the story. Because by the end of the week, they also found that the groundwork they had laid with their lobbing, and their tenaciousness before the subcommittee, created an opening they would not otherwise have had.

First, the bad news, and plenty of it

Things started bleakly. The House Commerce and Labor Subcommittee on Energy turned back multiple proposals that would have benefited Virginia’s small renewable energy and energy efficiency businesses, as well as their customers. Going down to defeat were bills to improve the renewable portfolio standard (HB 1913), create an energy efficiency resource standard (HB 1730), require a more rigorous study before utilities can impose standby charges (HB 1911), make third-party PPAs legal across the state (HB 1925), and enable an innovative vehicle-to-grid (V2G) project (HB 2073).

Left in limbo for the day was Delegate Minchew’s community solar bill, HB 1636. Minchew wasn’t ready to give up on it, but he had not found a way to get the utilities to back off their opposition. It went without saying that, without Dominion’s buy-in, the subcommittee members wanted nothing to do with it. Out of respect for a fellow Republican, however, they were willing to give him a couple of days’ grace. (On Thursday they killed the bill off.)

One small success was the raising of the cap for individual commercial renewable energy projects from the current 500 kilowatts to 1 megawatt (MW) (HB 1950). Bills to increase it to 2 MW were discarded. The bill was also passed out of the full committee on Thursday.

Also reported out was HB 2267, creating the Virginia Solar Development Authority. It passed in the full committee on Thursday but was then referred to the Committee on Appropriations.

With a few exceptions, the good bills lost on party-line voice votes following testimony from utilities in opposition to the measures. Republican committee members repeatedly expressed their concern about the potential impact on other ratepayers of bills that would make it easier for utility customers to generate their own power, or that would require utilities to buy a smidgeon more renewable energy.

Indeed, anyone who thinks Republicans don’t care about poor people should have been in that room. The outpouring of concern for struggling families was tremendously affecting. These brave souls made it abundantly clear that nothing that could be construed as a subsidy would sneak by on their watch.

Those of us who had seen some of the same delegates vote just last week to continue giving tens of millions of dollars annually in subsidies to coal companies, could not help noting the inconsistency.

The anti-subsidy rhetoric was further undercut when, a few minutes later, the subcommittee unanimously approved Delegate Yancey’s bill (HB 2237) declaring it in the public interest for the state’s largest utility to install up to 500 MW of solar and offshore wind projects. Chairman Terry Kilgore did ask Dominion Power’s lobbyist if it would raise rates, but he was easily satisfied with the assurance that it would not-even though solar was “marginally more expensive.”

This was all the committee wanted to hear, and a motion had already been made to report the bill when the members were suddenly treated to an earful from the solar industry-not in support of the bill, but in opposition. Francis Hodsoll of Virginia Advances Energy Industries and Jon Hillis of MDV-SIEA, the solar industry trade association, praised the goal but urged that the bill be amended to open up competition for building the solar projects. Utilities might prefer to build the projects themselves to earn their guaranteed return on investment, said Hodsoll, but ratepayers would benefit from lower costs and in-state jobs if independent companies were eligible to bid.

Tony Smith of Secure Futures, LLC, further explained that federal tax incentives strongly favor independent companies developing projects instead of the utilities doing it themselves. He said an independent firm that develops a 20 MW project can sell solar for 5 cents per kilowatt-hour, a far better price than a utility can achieve building the same project itself.

Andy Bidea of Sigora Solar put the case most simply. “This is America. Let’s give capitalism a chance, right?”

Catchy idea. The committee proceeded to report the bill without changes, but Kilgore encouraged the patron to work with the solar industry on possible amendments prior to the full committee meeting on Thursday.

The industry’s stand had an effect. When the bill was taken up on Thursday, it included an amendment allowing utilities to buy power from a third-party developer before purchasing the project itself. This should be significant because the SCC would presumably insist on the lowest-cost approach. In an email, Francis Hodsoll told me the industry now supports the bill, which passed the full committee.

With Dominion’s recent announcements of its plans to move forward with as much as 400 MW of large-scale solar projects in Virginia, this is a hopeful sign for utility solar in the state. Only one project has actually been announced, a 20 MW project in Remington, Virginia.

Admittedly, the struggle for distributed solar continues. The happy ending on the Yancey bill means little to members of the industry struggling to make a living doing residential and small commercial projects. They had pinned a lot of hope on the grant program that passed with such fanfare a year ago, only to sink like a stone in a House subcommittee this session.

On the other hand, those who take the long view believe that once Virginians get familiar with the benefits of solar, it will become an unstoppable force. The indicators point to success in coming years whether utilities like it or not.

In addition to the clean energy bills, the subcommittee also took action on two climate bills Tuesday. It rejected Delegate Villanueva’s HB 2205, which would have had Virginia join the Regional Greenhouse Gas Initiative as a vehicle to reduce carbon emissions. (The Senate companion bill died on a party-line vote last week.) It was the only legislation this year that would have taken positive action to address climate change and raise some of the enormous sums of money that will be needed to address the consequences of sea level rise.

Instead, it passed HB 2291 (O’Quinn), a bill that would require the Department of Environmental Quality (DEQ) to get approval from the General Assembly before submitting to the U.S. EPA a plan to implement the Clean Power Plan. Since the Republican majority has made its hostility to the Clean Power Plan clear, this is widely seen as a way to keep the state from acting at all. The bill also passed the full committee Thursday on a straight party-line vote, a clear indication that it is about party politics and anti-Obama Administration sentiment, not climate change.

Over in the Senate, however, saner heads prevailed. Senator Watkins amended his companion bill, SB 1365, simply to give DEQ direction on what to consider in developing the plan, and to require it to consult with the SCC and to meet with General Assembly members. The substitute bill passed Senate Agriculture unanimously.

Meanwhile, Senator Wagner’s bill to protect utility profits and shield Dominion (and now APCo too) from SCC scrutiny through the end of the decade sailed through Senate Commerce and Labor in spite of sparking the kind of outrage and condemnation in the press usually reserved for bills on guns and abortion. Editorial boards excoriated the legislation; Wagner was forced to sell his Dominion stock. Environmental groups, which had first sounded the alarm, staged a protest outside the General Assembly on Thursday morning and spurred thousands of constituents to write letters opposing the ratepayer rip-off.

As a consequence, SB 1349 ran into trouble on the Senate floor Thursday afternoon, and a substitute was introduced consisting of two pages of such dense regulatory detail that I cannot possibly tell you what it means. Anyone with the gumption to try to understand it may be wasting their time anyway, because I hear it remains in flux, with negotiations underway right now. Senator Donald McEachin reportedly is working to make it less objectionable. One thing seems certain: the senators who will be asked to vote on this will have no chance to review the language and reach their own conclusions.

It’s a lousy way to make sausage, but it’s ours.