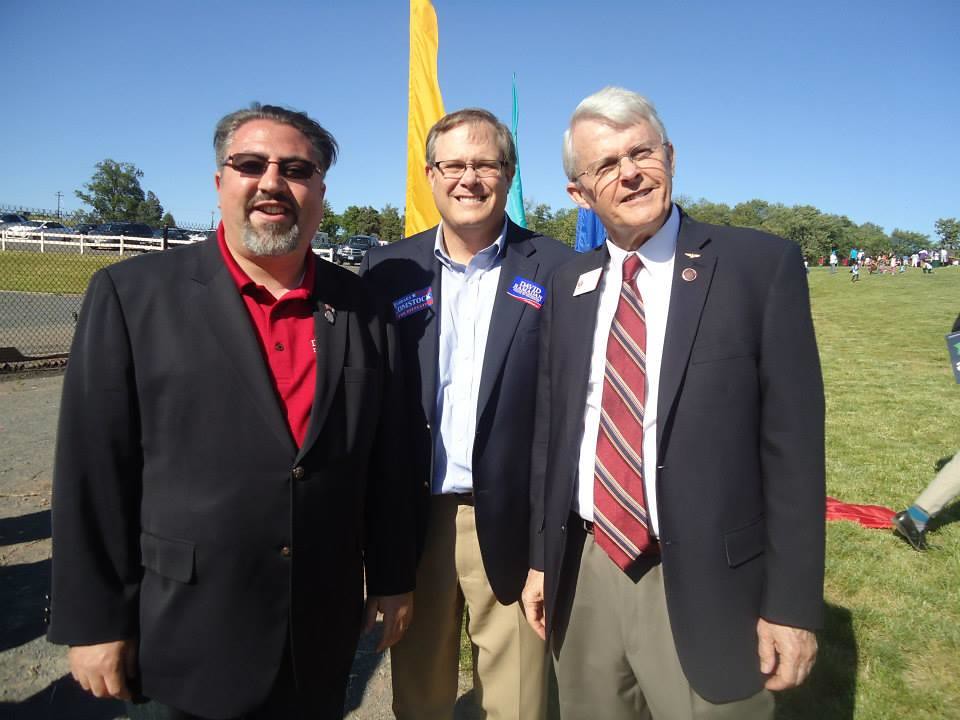 In “honor” of his departure from the Virginia House of Delegates, here are some “highlights” and links to the illustrious career of Del. David Ramadan (Far-right “R”; pictured with the possibly even MORE far-right-wing Sen. Dick Black). Enjoy? 😉

*Loudoun Republicans Double-Down on Divisive, Anti-Gay Agenda (“Delegates David Ramadan and Tag Greason voted against an openly gay candidate for a General District Court Judgeship. Mr. Tracy Thorne-Begland, the Chief Deputy Commonwealth’s Attorney in the City of Richmond and a decorated Navy veteran, had been nominated by a Republican Delegate…Ramadan and Greason made no public comments to explain their decisions; they simply voted with a majority of their Republican colleagues against his nomination.”)

*Loudoun Republicans Revealed Themselves in the 2012 General Assembly Session (Noted that Ramadan voted for an extreme “personhood” bill, the infamous “transvaginal ultrasound” bill,  repeal of Virginia’s “One Handgun A Month” law, an onerous and utterly unnecessary voter ID law, etc.

*DPVA: Ramadan’s Record: Speaks for Itself (Ramadan’s “record speaks for itself, but it says that he is focused on an extreme ideological agenda mush like Ken Cuccinelli and his right-wing counterparts-not practical solutions to problems facing our Commonwealth.”)

*DPVA: Byron and Ramadan Should Come Clean on Gifts (“Following the pattern of Ken Cuccinelli and Bob McDonnell, The News & Advance reported this morning that fifteen-year Delegate Kathy Byron and two-year Delegate David Ramadan failed to disclose their travel to Taiwan in 2012”)

*Del. David Ramadan: Extreme, Egregious, Yet Somehow Holding Down an Obama District (Ramadan “has been eviscerated by the Too Conservative crew for being a ‘shameless self promoter’ and ‘egomaniac extraordinaire,’ for employing ‘disgusting, disturbing tactics,’ and for being ‘unfit for public office.’)

All this extremism and nuttiness is particularly sad, because Ramadan’s district (the 87th) is an Obama/Kaine/McAuliffe/Northam/Herring district that should either be represented by a Democrat, or at WORST a moderate Republican (if there are any of those left). Yet instead, the 87th got a far-right loon like David Ramadan. Frankly, that’s what happens when “federal election” Democrats stay home in “odd-year” elections. If and when that stops, so will the phenomenon of right-wing Republicans holding otherwise “blue” districts in this state. Until then, expect more David Ramadans…ugh.