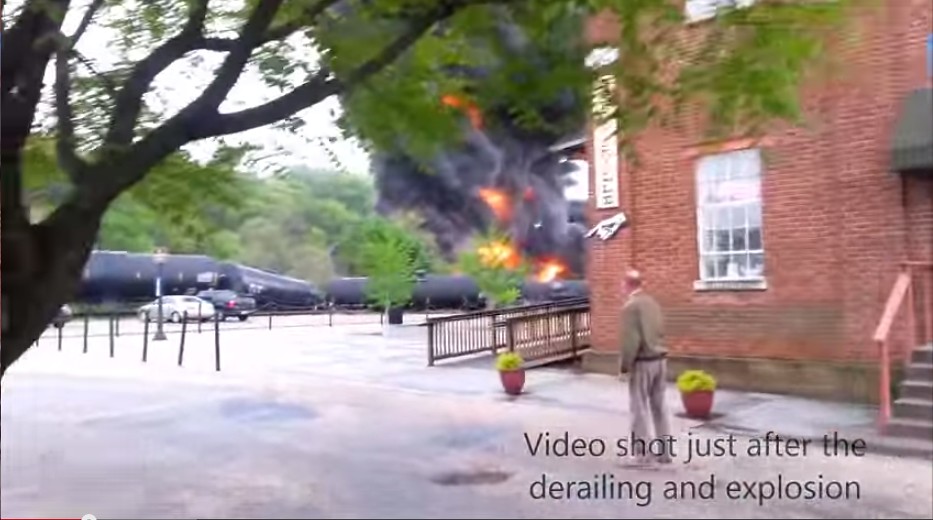 This following press release came out this afternoon, almost simultaneously with the issuance of new safety rules for high-hazard flammable trains (e.g., those carrying oil) by the U.S. Department of Transportation. Regarding the latter, enviro groups are blasting the rules as far too lax, with a 10-year phaseout period instead of an immediate ban on these super-dangerous trains (see Lac-Mégantic rail disaster for an example of the horrible damage these things can do when they explode in populated communities). As for the Virginia report, it notes that oil train safety is mostly a federal responsibility: “Given the constitutional limitations on state governments to address the root causes of rail emergencies, the Task Force’s efforts were necessarily focused on opportunities to enhance response and recovery, with some limited prevention and safety-related activities conducted within the authorities delegated to the State Corporation Commission (SCC) by the Federal Railroad Administration (FRA).” Strangely, the Virginia report also states: “the overall probability of such an incident remains relatively low compared to other types of transportation-related emergencies. The probability of life loss and significant property or environmental damage is lower still.” Perhaps so, but again, when these things DO explode – and they do so far too freqently – they are deadly and destructive. Yet another reason to get off dirty, dangerous fossil fuels and onto clean energy (last I checked, you don't get deadly explosions from energy efficiency, solar and wind power!).

“I applaud the members of this task force for the work they have done over the past 11 months in bringing subject matter experts, environmental groups, industry representatives and members of the public together to act on immediate opportunities for enhancing railroad safety and security in our Commonwealth,” said Governor McAuliffe. “This group has also done a great job producing a set of longer-term recommendations to help guide future preparedness initiatives. I look forward to reviewing and implementing these recommendations with my public safety and transportation teams so that we can ensure the safety of these rail lines that are essential to our economic growth.”

Governor McAuliffe formed the Railroad Safety and Security Task Force on May 9, 2014 after a derailment and explosion of crude oil rail cars in Lynchburg. Since it was formed, the agencies comprising the Task Force have increased the frequency of rail inspections on high-hazard routes, delivered crude oil response training across Virginia, and developed additional hazardous materials response capability in concert with local jurisdictions.

“I am proud of the steps this Task Force has taken and the future actions we have recommended to enhance the safety of our Commonwealth’s rail lines and the communities they serve,” said Secretary of Transportation Aubrey Layne, a Task Force co-chair, “While the Task Force was necessarily focused on what we can do at the state level to prevent, prepare for, respond to, and recover from hazardous materials incidents along rail lines in the Commonwealth, the regulation of interstate commerce is almost exclusively reserved to the federal government. We strongly urge our federal partners to swiftly operationalize the new regulations announced today and provide states with additional funding to address the challenges posed by high-hazard flammable trains.”

“This Task Force report will serve as a blueprint for our continued efforts to protect life, property, and the environment from all hazards facing Virginia,” said Task Force co-chair, Secretary of Public Safety and Homeland Security Brian Moran. “We are also looking forward to the anticipated release of the National Transportation Safety Board (NTSB) investigation on the Lynchburg derailment that occurred one year ago today.”

The Rail Safety and Security Task Force Initial Report and Recommendations can be accessed at the following link: https://pshs.virginia.gov/initiatives/commissions-task-forces-working-groups/.