See below for the top-rated comment on Ken Cuccinelli’s Facebook post regarding the three-judge panel’s ruling on President Obama’s immigration executive actions. I’ve crossed out the commenter’s name, as that’s not really relevant; the point is that this comment, claiming that any “illegal immigrant families” who “come back” to the U.S. “deserve a bullet” has received 126 “likes” as of 9 am Wednesday morning, and has not been removed or rebutted in any way by Ken Cuccinelli. What’s horrifying is that Cuccinelli is not an outlier in today’s Republican Party; to the contrary, he was elected Atttorney General of Virginia and almost elected Governor of Virginia as the Republican nominee in 2013. How can someone so extreme, so crazy, so godawful even be taken seriously in the United States of America? And how many others in his party agree with the sentiments expressed by the “bullet” commenter? Clearly, a large number, based on the 126 “likes.” It’s extremely disturbing, even more so that the media won’t call out this party for what it has become, but continues its dangerous and cowardly “false equivalency,” false “balance” “reporting” instead of simply reporting the TRUTH. 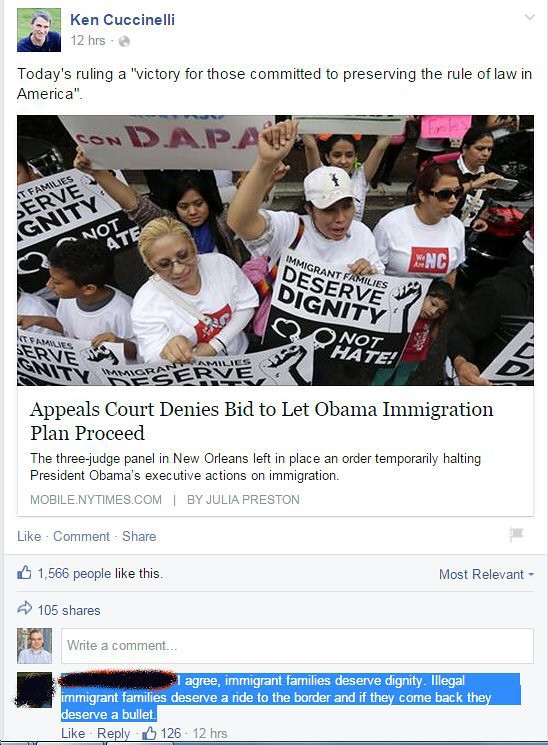 Another photo of early voting in Virginia, which started this morning...this time by @MichaelLeePope in Alexandria https://bluevirginia.us/2020/09/friday-news-just-call-them-climate-fires-biden-shows-the-qualities-trump-lacks-former-pence-aide-to-vote-for-biden-trump-whitewashing-us-history-with-patriotic-education-early-vot#comment-5075419167