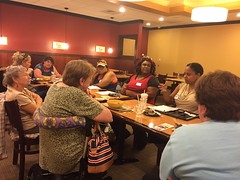 Virginia Organizing kicked off the “Stand with Women” campaign across the Commonwealth with a series of local women’s roundtables in Danville, Waynesboro, Petersburg, and Blacksburg. The roundtable discussions are designed to empower women to speak out on issues that are important to them, cross racial and cultural lines to address struggles specific to women of color, and promote women’s leadership in organizing for action on these issues.

Throughout its 20-year history, Virginia Organizing has always placed emphasis on diversity and encouraged participation and leadership from women. The recent campaign is an effort to ensure that low-income women and women of color are being heard in discussions about women’s issues in Virginia.

“As we know, sometimes women’s issues are framed from the perspective of white women,” said Virginia Organizing Chairperson Sandra A. Cook. “Virginia Organizing’s goal is to do what we always do-empower people who have been oppressed to organize for change. With the ‘Stand with Women’ campaign, our focus is on making sure the voices of all women, especially low-income women and women of color, are heard and valued in discussions on women’s issues.”

In recent years, political attacks on women’s health have increased at the state and federal levels. The passage of the Patient Protection and Affordable Care Act in 2010 was a victory for women, since insurers would no longer be able to charge higher premiums for women, health care plans would need to include birth control and preventive care like annual cervical cancer screenings at no cost to the insured, and low-income women would be able to qualify for Medicaid under the expansion of the program. The U.S. Supreme Court and Virginia’s General Assembly undid these victories in the years that followed.

Since 2012, corporations have won the right to discriminate against women by not offering birth control in employee health plans, Virginia (and other states) have left hundreds of thousands of women out of the health care system entirely by refusing to expand Medicaid, laws have been passed to restrict access to women’s health centers that provide reproductive choice, and the rhetoric against women’s full access to health care is only increasing.

Virginia Organizing is fighting back through grassroots community organizing efforts that place an emphasis on local people taking action in their districts. As part of the “Stand with Women” campaign, Virginia Organizing supporters called on Virginia Delegate Terry Kilgore to stand with women and expand Medicaid. Delegate Kilgore represents Southwest Virginia, where a hospital closed in part due to lack of Medicaid expansion, which further restricts access to health care.

“The women’s roundtables and actions like calling Virginia Delegate Terry Kilgore give us an opportunity to talk about these issues from the perspective of women who are often left out of the conversation,” said Rosa Leyva from Weyers Cave.

A woman who is already struggling to financially provide for herself or her family will be more severely economically affected by adding child care costs, lost income from missed work (since the U.S. does not have a paid maternal leave policy in place), hospital bills from delivery, potential developmental delays and costs associated with increased care for children whose mothers did not have access to prenatal care, and more. Virginia Organizing wants to change that.

“Women are already struggling with lower wages than our male counterparts,” said Virginia Organizing Petersburg Chapter leader Eva Greenwood. “We have to fight for access to jobs, we have to fight to make a fair wage, we have to fight to have any semblance of economic security. People always throw out that women make ’77 cents for every dollar a man makes’ but that’s not true for women of color. We make far less than that.”

Through the “Stand with Women” campaign, Virginia Organizing will continue to organize women-only, women-led roundtables and meetings in Fredericksburg, Petersburg, Charlottesville, and other towns across the state.  These meetings will help identify what issues are most pressing to the women most commonly left out of the political decision making process and then empower those folks to work on campaigns to address those issues.  Virginia Organizing will coordinate these efforts with other organizations.

Virginia Organizing will also continue to ask local, state, and federal elected officials to stand with women by supporting policies that positively affect women and expanding Medicaid at the state level.

Photos of recent “Stand with Women” events can be found by clicking here.