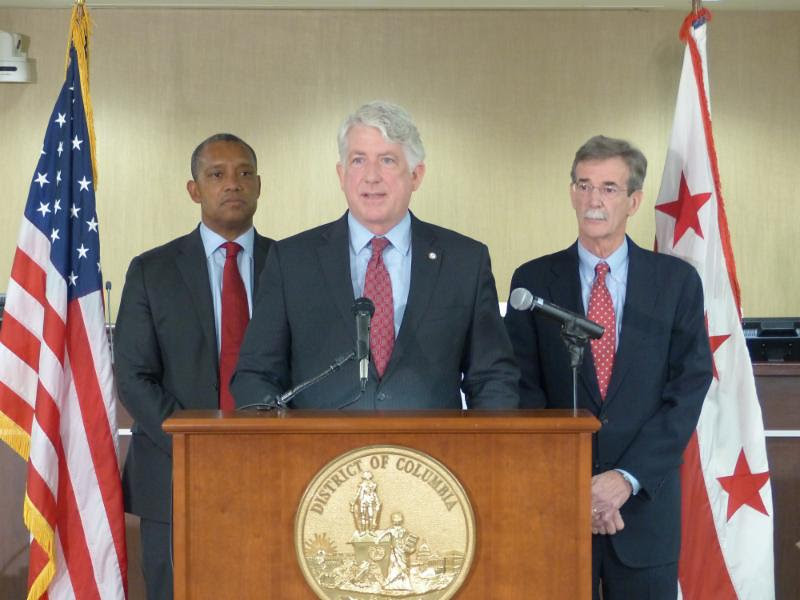 From AG Mark Herring’s office (also check out the audio below):

WASHINGTON, DC (January 15, 2016)-Today, Attorney General Mark R. Herring joined Maryland Attorney General Brian E. Frosh and Washington, D.C. Attorney General Karl A. Racine for a first-of-its-kind meeting to discuss opportunities for collaboration and cooperation to prevent and reduce gun violence in the national capital region and throughout the three states. This was the first time Attorneys General Herring, Frosh, and Racine have held a joint meeting, and the first time the chief legal officers of Virginia, Maryland, and Washington D.C. have ever met to discuss gun violence prevention and reduction.

During the hour long meeting at the Office of the Attorney General of the District of Columbia, each attorney general discussed ongoing efforts in their offices and states to reduce the availability of illegal guns, to prevent guns from getting into the hands of criminals and dangerous individuals, and to reduce gun violence. Each attorney general committed to designating a staff point person who will work with their counterparts to establish a timeline and structure for regular interaction, facilitate the sharing of strategies, criminal information, and opportunities to collaborate on initiatives that will prevent and reduce gun violence in the national capital region.

“Too many families in Virginia, Maryland, and the District have been touched by gun violence. They unfortunately know what it’s like to have a loved one in the wrong place at the wrong time, and how quickly an act of gun violence can change a life forever,” said Attorney General Herring. “In 2014, there were more than 4,200 gun crimes in Virginia, and the ATF traced more than 2,600 guns used in crimes around the country back to Virginia. We can and should do more to enforce our existing gun laws, even while advocating for additional measures like universal background checks. This partnership with Attorney General Frosh and Attorney General Racine is going to allow us to work regionally to reduce gun violence and illegal gun sales and possession. I’m really excited about the work and the opportunities in front of us.”

“Crime doesn’t respect boundaries, and our crime-fighting strategies need to cross jurisdictions as well,” said Attorney General Frosh. “I applaud my colleagues for their commitment to ending gun violence and illegal gun trafficking. We might have different laws, but we have the same goals.”
“Gun violence takes a terrible toll not only on families in the District, but on families across the Washington region,” Attorney General Racine said. “My colleagues are here because we all want to be good neighbors to each other in this region, and we want to reduce the gun violence that results from the illegal gun trade. All of our jurisdictions have to live with the consequences of the proliferation of illegal guns – and the trade in guns is regional, so we believe any solutions must be regional.”

As part Governor Terry McAuliffe’s Executive Order 50, Attorney General Herring is co-chairing a Joint Task Force to Prosecute Gun Crimes that is working to increase coordination between local, state, and federal partners to help enforce Virginia’s existing laws on background checks and possession or sale of illegal guns. In December, he fulfilled his statutory obligation to evaluate the states whose concealed handgun permits are recognized in Virginia. After an extensive and thorough review, he recommended that Virginia State Police cease recognizing permits from 25 states whose laws are not sufficient to prevent issuance of a permit to persons that would be disqualified in Virginia.