I’d note that ditching fossil fuel investments is the right thing to do on several levels: economically (these industries are dying or inevitably going to die; for instance, see Coal Is Officially a Zombie Industry and The Sun Also Rises: Saudi Arabia’s Future Lies in Renewables), environmentally (fossil fuels are destroying the planet’s environment in a million ways) and morally (it’s just plain evil to profit off of trashing the earth). So…what are the rest of Virginia’s colleges and universities, not to mention the Virginia Retirement System, waiting for? Ditch this poison now. 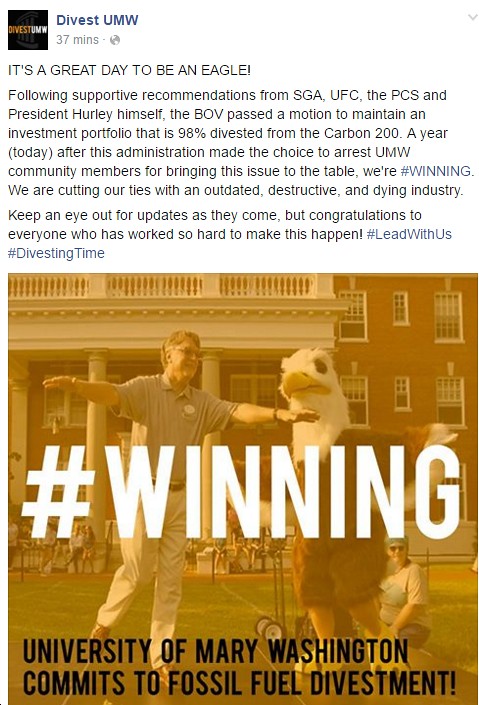 Fredericksburg, Virginia – 4/15/16: This morning, the Mary Washington Board of Visitors made the decision to divest from fossil fuels, according to the PCS recommendation for 98% divestment. The Student Government and University Faculty Council both endorsed divestment prior to this morning’s meeting. President Richard Hurley recommended the course of action, which was then voted on unanimously after a call to vote by BOV member Edd Houck. About 30 students from UMW and universities across Virginia attended the board meeting. Students rallied outside the meeting after the decision, with Sophomore and DivestUMW Co-Chair Sarah Kinzer giving a speech.

“The decision to divest from fossil fuels represents a rejection of the immoral activities of the industry. Companies such as Dominion Power have an unethical hold over our politics in Virginia, exploit our natural resources, and damage our environment. The University of Mary Washington’s rejection of these practices is a crucial first step in the fight towards a just transition away from this irresponsible and damaging industry.”

“This decision is the result of the collective work of hundreds of students over several years. As the first Virginia university to divest, Mary Washington can now proudly call itself an ethical place to learn – one that values the lives of those affected by climate change and acts on those values.”