Tragic news this morning for the entire Virginia Democratic family. Here’s a statement from the family of Sen. Kaine’s Northern Virginia Regional Representative Joe Montano (note: Joe has also worked with Obama for America, the Democratic Party of Virginia, the Democratic National Committee, and much more). Also, see below for a few photos, as well as just a few of the many thoughts and condolences pouring in from elected officials, Democratic activists, etc. Personally, I’m in shock and very sad, as Joe was a great guy, one of the best people I’ve met since I got involved in Virginia politics in 2005. I worked closely with him on the Webb campaign in 2006 and go to know (and like) him well. The last time I saw him was a few months ago, appropriately enough, in Sen. Tim Kaine’s Senate office. Joe really cannot be replaced, as he was a unique, original force of nature.  Rest in peace, my friend… 🙁

It is with our deepest sorrow and gratitude that the Montano family share the news of the untimely passing of their son, brother and uncle Joe Montano, Jr. 47, in his home in Falls Church, Virginia. He is survived by his parents Lori Montano and Jose Montano, his siblings Amy Lopez and Ben Montano.

A friend to all, Joe was a passionate community activist, committed public servant, and champion of the Filipino American community. He was serving as the Regional Director for Senator Tim Kaine.

The collective pain that we feel as we process his passing brings us together to remember his love, his energy, and his laughter. He loved his family, he was proud of who he was and where he came from. Share your stories of Joe and continue to keep him in our hearts.

The family asks that your thoughts and prayers at this time further details regarding the memorial services will follow. The family is currently making arrangements services to be held in hometown area of Hampton Roads. ‪#‎joemontano‬

Joe with fellow members of the Webb “ragtag army” in 2006. 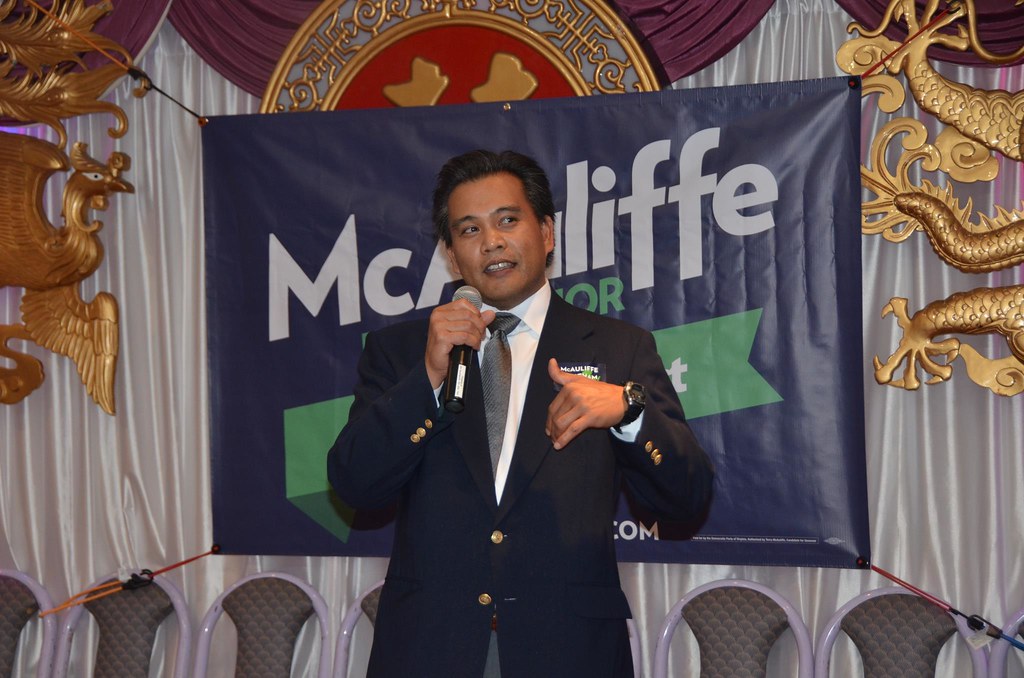 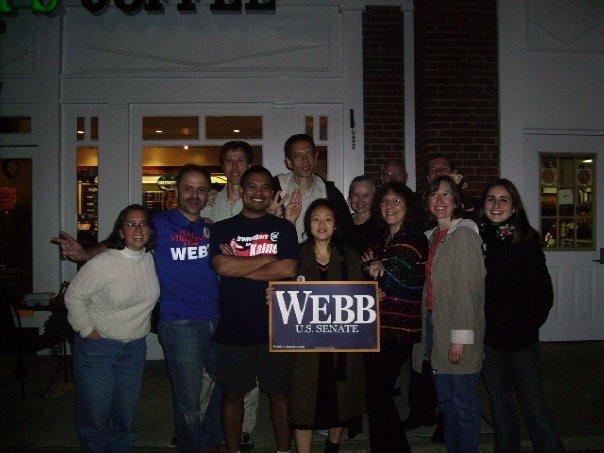 Joe and yours truly. 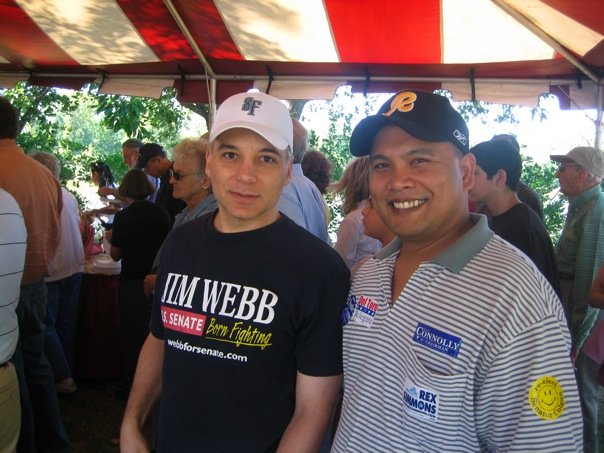 Gov. Terry McAuliffe: “Saddened by the loss Joe Montano, a great friend and advocate. VA will miss his passion and boundless enthusiasm.”

Rep. Don Beyer: “I lost a friend yesterday with the passing of Sen. Kaine’s Regional Director Joe Montano. Joe was a voice for the people of Northern Virginia, committed to achieving progress through public service. We need more like him, and his death at such a young age fills me with sorrow. He will be missed deeply.”

Rep. Gerry Connolly: “Terribly saddened to hear of Joe Montano’s passing. An energetic, passionate and hardworking Democrat. Always with a smile, Joe served his community well. His loss will be felt throughout Northern Virginia.”

State Sen. Adam Ebbin: “Shocked to hear that Joe Montano, Senator Tim Kaine’s NoVA Regional Director, died last night. Joe always had a smile when he saw you and a place in his heart for Democrats. It’s hard to believe he won’t be here for this election. Too young, too soon. There aren’t adequate words to express the void he leaves and the sorrow I feel.”

State Sen. Scott Surovell: “Got off the river today shocked to learn about the passing of Joe Montano. I’m pretty sure I first met Joe when he served as the DNC’s VA staffer for Howard Dean’s 50-State Strategy in 2005. He was one of the most positive people I’ve ever met and had an unmatched passion for grassroots organizing. He helped us build the Fairfax County Democratic Committee and the Democratic Party across Virginia. Virginia lost one of its best yesterday.”

Del. Alfonso Lopez: “This is devastating – and so hard to comprehend. Joe touched so many people and made such a difference in countless lives. His family are in my thoughts and prayers at this difficult time.”

Del. Jennifer Boysko: “Joe Montano… I’m heartbroken. No words are sufficient. We were just laughing together last week… How could you be gone?”

Del. Sam Rasoul: “Very sorry to hear about the passing of Joe Montano. Young, bright, and one of the nicest guys in politics. We can use many more just like him. Rest in peace my friend.”

Del. Eileen Filler-Corn: “So sad to hear about Joe Montano‘s passing. He was an incredible Virginian, a wonderful person and a friend for so many years. He will be terribly missed.”

Del. Rip Sullivan: “Devastating news about the death of Joe Montano. I saw him last Thursday and he was, as usual, smiling. He was always smiling. We will miss him. Peace, Joe.”

Del. Marcus Simon: “Mourning the loss this morning of one of the truly good guys in Virginia and national Politics, U.S. Senator Tim Kaine‘s regional director Joe Montano. Joe and I frequently found ourselves at the same events and traveling the same circuit, and he was always warm, friendly and smiling. Occasionally, if I arrived first, I’d find myself startled by a firm slap on the back, and then hear a playful ‘What’s my Delegate doing here?’ when I turned to see Joe’s broad grin. Most recently he was a champion for newly arriving refugees from the middle east and gave them a rousing welcome on behalf of Senator Kaine at Temple Rodef Shalom. I still can’t believe he’s gone. He will be missed.”

Loudoun County Board Chair Phyllis Randall: “Losing Joe Montano is both shocking and sad. I saw Joe just last Wednesday he looked great and was on top of the world. I actually told him ‘Joe you look really good, really healthy.'” In his Joe way he joked replying ‘C’mon Phyllis, you’re married.’ 🙂 May Joe Rest in Peace, my condolences to his family and to Senator Kaine and his staff.”

Fairfax County Supervisor Jeff McKay: “Joe Montano was a great public servant, friend & his work for @fairfaxcounty & VA with @timkaine will not be forgotten. He’ll be missed.”

Arlington Commissioner of the Revenue Ingrid Morroy: “So very sad to hear of Joe Montano’s passing. ”

Terron Sims: “I just learned that my buddy, Joe Montano passed away. Brother was way too young…he and his work ethic, we shall sorely miss…”

Dewita Soeharjono: “Mourning the lost of a BFF, one of Democratic Asian Americans of Virginia co-founders, and a giant Joe Montano ❤. RIP.”

Josh Chernila: “I’m just stunned and heartbroken hearing this morning that power dear friend Joe Montano passed away last night. Those of us who believe in progress and have been fighting for Civil Justice in the front lines of politics aspire to the level of commitment and dffectiveness that Joe showed over the course of decades of heartfelt service….he could instantly connect with anyone and he was the kind of person who could disagree with someone without being disagreeable, who could find inspiration in opposition and who really defined what it is to be a good friend. I don’t know what else to say I’m just [grateful I] had him as a friend.”

Ben Tribbett: “Joe Montano passing away is a tragedy that there are no words for. Joe has been my friend for a long time, and was the MVP of Tim Kaine’s Senate staff for constituent services. His death is unfathomable, but even more so this week which would have seen all of his hard work come full circle as Tim went on the national ticket. RIP my friend.”

Matt Bell: “Terrible news. Rest in peace Joe. Truly a Virginia Statesman in every aspect. He extended the helping hand to me and 100s of other young professionals/democrats. Like hundreds of other Virginia Dems, thankful our paths crossed in this short journey called life.”

Carter Batey: “No words to express both the sadness at the passing of Joe Montano, and in equal measure how good a person he was. The impact he made on the lives of everyone he knew will long be felt. Rest in peace, brother.”

Charley Conrad: “Very sad news about Joe Montano. I met Joe when I was living in Va Beach. His drive, smile and vigor was awesome. I remember Joe speaking at the Arlington Democrats Meeting in 2008. He told us what to expect as a battle ground state in a presidential election. He was so right and his words rang true in 2012 and still ringing in 2016. RIP Brother Joe.”

Clark Mercer: “Terrible news, though I join the chorus of friends in paying tribute to Joe Montano. Hard working, in this business for the right reasons, genuine, and always flashing a terrific smile. RIP my friend.”

Adam Zuckerman: “Stunned. RIP Joe Montano. We’re gonna win this one for you.”