I was in Richmond today and had a chance to attend the 2017 Virginia Vigil & Advocacy Day protest against gun violence, and FOR commonsense gun safety measures. Here are some photos and video from the event, at which AG Mark Herring, LG Ralph Northam, Rep. Donald McEachin and others spoke. It was great running into friends from the gun violence prevention community like Lori Haas, Josh Horwitz, Andy Parker, Laura Sonnenmark and others. Now, if we could only replace NRA stooges in the Virginia General Assembly with reasonable people, we’d be in much better shape, at least here in the Commonwealth.

P.S. Earlier in the day, I ran into a bunch of people on the Virginia Capitol grounds wearing “Guns Save Lives” stickers. The good (albeit not particularly surprising) news is that there were many more people at the gun violence prevention rally than at the pro-gun event… 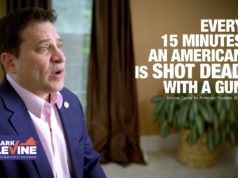