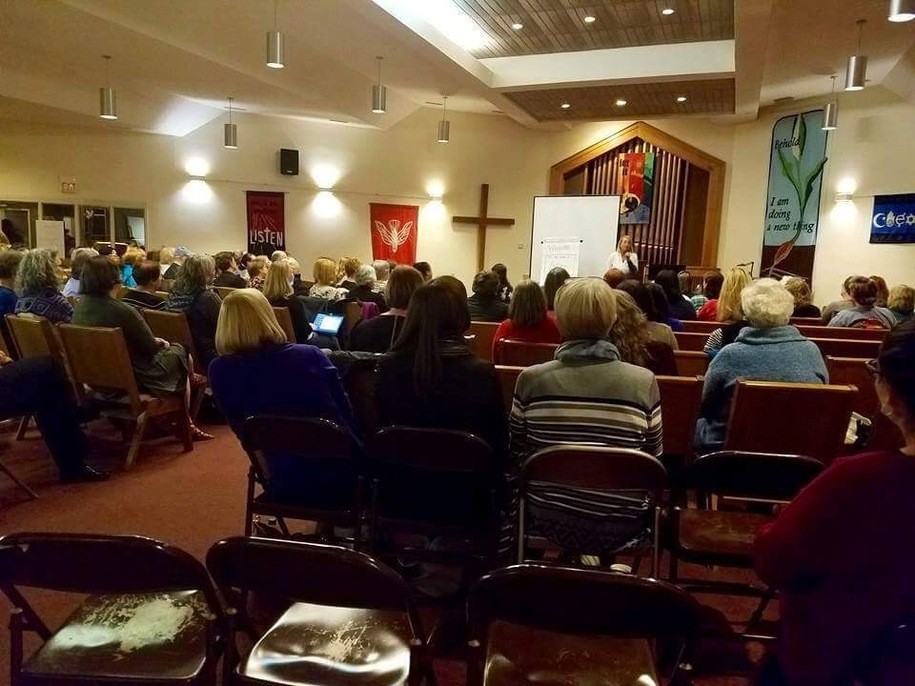 “If it rains, Democrats don’t turn out to vote,” Betsy Cramsey told the crowd of mostly women gathered at First Congregational Christian United Church in Chesterfield, VA. But they’re turning out now—nearly 200 attended the meeting of the Liberal Women of Chesterfield County (LWCC) on Monday night. The audience cheered on the candidates running for House seats in the legislative elections this coming November, then settled down to listen to Cramsey as she walked them through the basics of how bills are created and passed in the General Assembly.

Cramsey, who worked in Constituent Services for Democratic State Senator Jeremy McPike (D-Prince William County), emphasized the importance of this year’s election, where Democrats have a chance to flip the House of Delegates from red to blue, and where the governorship is up for grabs. Across the nation, attention is tuned to what happens in Virginia this fall. Many anticipate a referendum on the Trump administration. Regardless of the weather, Virginians could see the polls flooded by voters, as happened last week in Delaware, where Democrat Stephanie Hansen annihilated her Republican opponent, winning a State Senate seat in the special election.

The pool of talented and qualified candidates—some running in traditionally red districts where Democrats, in recent years, had given up on running at all—offers reason for hope. Demographic shifts in Chesterfield County, tied to rapid job growth and affordable housing, mean that Chesterfield is becoming “less white and less Republican,” according to WCVE [PBS]reporter Michael Pope.

Seats long held by Republicans, like Del. Manoli Loupassi, in the 68th district (which includes portions of Richmond City, Chesterfield, and Henrico), could go to Democrats. Hillary Clinton won the 68th in the November 2016 general election. Perhaps Loupassi can see the clouds darkening: Elieen Davis, an activist who has been fighting for years to get an equal rights amendment to the Constitution, says Loupassi recently stated he plans to vote for the Equal Rights Amendment Bill—this after he refused to co-sponsor it for six years. A change of course, now that “the women,” as 7th District Congressman Dave Brat referred to them in a speech that went viral last month, have mobilized in the wake of the presidential election.

One of the three candidates hoping to steal that seat from Loupassi, Mary Jo Sheeley, came to the LWCC meeting with her pink, knitted, cat-ear cap, which she put on when she stood to be introduced to the audience. Sheeley, a sharp-featured lawyer with dark red hair and a genteel, southern inflection, echoed a sentiment expressed by many of the Virginia legislative candidates: “November was a wake-up call to all of us.” She decided to run after she and her husband spent time at the General Assembly opposing a bill that would defund Planned Parenthood. Sheeley says it was clear that “they’re not listening to us.” For weeks, she debated about running, but finally thought, “I care about people. I can make a difference.” A retired environmental lawyer, Sheeley spent 25 years practicing law, first in private practice, then as assistant to the Attorney General. She later served as a director in the Department of Environmental Quality and, before retiring, ran an environmental legal team at Dominion Energy. She says this work allowed her to “see it from all sides.”

An enthusiastic crew of volunteers who worked with her during the Clinton campaign circulated the LWCC event collecting signatures. Claudia Marshall, a friend of Sheeley’s who has known her for 25 years, says that Sheeley “sees a goal and she works toward it. That’s true whether it’s cleaning a kitchen or getting a law passed.” During the Clinton campaign, they were given a badly run-down office on the South Side. “It needed to be painted,” said Sheeley, so she painted it. “I wanted the volunteers to have a nice place to come and work in, to feel good about where they were working.”

Sheeley’s daughter is gay, but she says her support for the LGBT community goes back decades. “By the time my daughter was five, she had been to as many gay weddings as straight weddings.” She’s concerned about vulnerable communities, including the poor. “We need to know that we are safe, that our children are safe and secure, that they can go to good schools and get good healthcare. Government should set a minimum where no one should be down here,” she says, drawing a vertical line with her hand. “How can you leave out segments of the people—tell LGBTQ people, you can’t work here, [tell women] you can’t get services from Planned Parenthood?”

Poverty is also a concern for Dr. Ben Pearson-Nelson, another of the three candidates running for the 68th. He shakes his head while discussing the Republican-sponsored bill currently before congress (H.B. 610) that would eliminate reduced school lunches, pointing out the reality that, for some students, the meal they eat at school is the only one they’ll eat during the day.  He says that when Republicans make claims about supporting family values, they tend to see only one kind of family in that vision. “That’s why we’re going to put families first.”

Pearson-Nelson teaches online courses at Purdue University in Criminal Justice, and has his own private business teaching science at preschools and elementary schools. It’s easy to see how he would appeal to young kids—he’s boisterous and animated, with a self-deprecating wit. And he wouldn’t hurt a spider, not even the large brown one crawling just inches from his neatly shined shoes. “Don’t kill it,” he says, “That’s a wolf spider. I teach biology. I tell the preschoolers, if you don’t want to be bitten by a spider, don’t touch it.” He and his 9-year-old son came to the LWCC event dressed in matching navy blue suits, both looking ready for the campaign ahead.

His business caters mostly to private schools, but Pearson-Nelson is attuned to the needs of public education, having served as PTA president at Robious Elementary, where his primary role is recruiting volunteers into the classroom and lunchroom and getting volunteers to buy supplies. The level of need in the school is a challenge, but he says he’s seen even greater challenges faced by schools in other districts, where PTAs have closed because they have no volunteers. The teachers there end up with no supplies. He believes that many other issues tie back to education—education affects everything.

“As Democrats, we get distracted by issues that are put together by Republicans to bait us.” He says his goal is to focus on issues that affect everyone: education, Medicare, Medicaid, the minimum wage. “Raise the minimum wage, and all that money goes back into the economy,” he says. “And that’s a women’s rights issue. Two-thirds of minimum wage workers are women. That’s an economic stimulus issue.” He says it’s time for Democrats to stop taking the bait and “make the them fight over on our turf. Make the Republicans the party of the elite.”

Pearson-Nelson isn’t the only educator running to become the Democratic candidate in the 68th. Dawn M. Adams teaches health policy at ODU. Unlike many of the other candidates for house seats in Virginia, Adams says it wasn’t the presidential election that compelled her to run; her interest in local government began years ago. She had been working in acute care as a Nurse Practitioner (Adams and her partner of 14 years are both N.P.s). At the time, she was preparing to open her own practice. Local government has an impact on business and healthcare policy, so Adams decided she needed to see it for herself. She planned to visit the GA as an observer for a few hours. Until that point, she says, she was “just an average citizen who would get up, go to work every day, come home,” not overly concerned about local government.

That all changed during her visit to the GA. She came back the next day, and stayed for the rest of the session. While there, she met a commissioner who asked if she wanted to work at a state agency. At first, she said no. But he convinced her that individuals who come from institutions like healthcare need to get involved, and so she took the job and became the Director of Health Services for the Developmentally Disabled.

During those years, she says, she learned “how underappreciated state government workers are.” She is disappointed by the antagonistic relationships that seem to characterize local government. “We need checks and balance, but both sides of government should work synergistically. There’s too much partisanship. Decisions in the GA aren’t about what’s best [for people], they’re about the agenda.” As an N.P., Adams feels she can bring her special knowledge to helping the GA make the right decisions.

Adams is tall, with a lacrosse player’s build. Her dark hair and calm, steady voice convey the sense that she has mastered the bedside manner, though her passion is evident. She sees health as integral to every other issue and believes we need to “put health, in a pro-active way, into all our policies. Health is our most precious resource. Health is our environment… When you distill the essence of what makes you happy—you can see its effect on all things: in transportation, work, education…”

Adams says that running for office “was just the next step.” She isn’t looking to become a career politician. Rather, she’d like to “get things off the ground,” then go back to medicine and teaching. She sees her move into politics as another means to serve as an educator. She’s learned that “every voice matters. A handful of people make policy, and they are influenced by the loudest people. If people knew how much power they have,” her eyes widen. “I want to educate people about that.”

Come November, one of these three candidates might be teaching Manoli Loupassi a thing or two about that, if he isn’t already hearing the approaching thunder.