You really can’t make this stuff up:

And don’t ever forget that Virginia Republicans nominated this lunatic as their Lt. Governor candidate in 2013. Also note that they never condemn Jackson’s crazy, bigoted comments. Finally, note that Jackson has been rumored as a possible 2018 VA GOP candidate for U.S. Senate against Tim Kaine. I mean, I’d pay serious money to watch that one! LOL 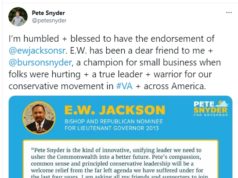 Speaking of VA GOP extremism (and bigotry, in this case). Any comment on this, @GlennYoungkin?!? https://bluevirginia.us/2021/05/as-virginia-republican-insiders-choose-their-nominee-the-candidates-are-doubling-down-on-far-right-extremism#comment-5374455447 h/t @owillis