VIRGINIA – This weekend nearly 60,000 households will receive a mailer in support of Democratic lieutenant gubernatorial candidate Justin Fairfax. The mailer was sent by BlackPAC, a national 527 that has already launched radio and digital ads in support of the Virginia’s statewide Democratic slate. The mailer cites Fairfax’s determination to fight racism and hate groups, create good jobs in the Black community, end voter suppression, and improve access to quality education. 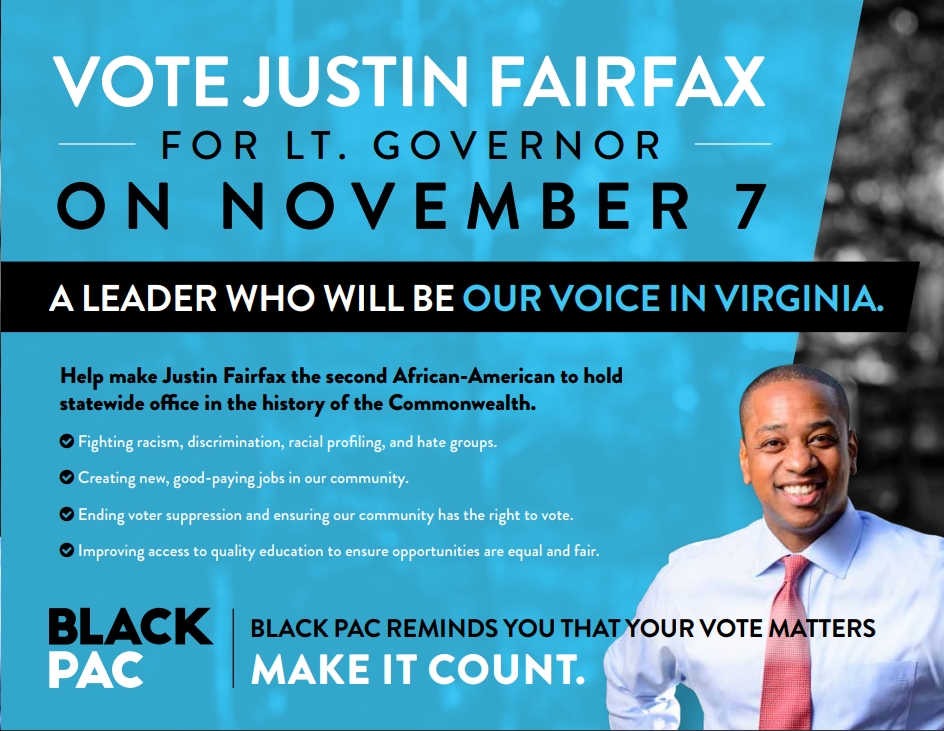 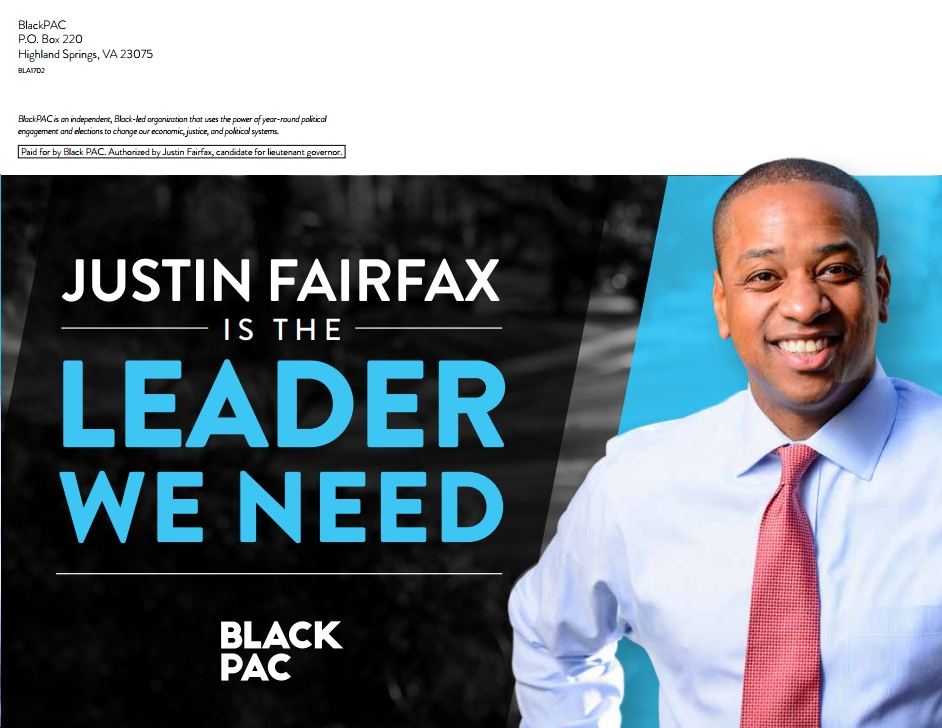 “As Lt. Gov., Justin Fairfax will be a voice for Black voters and a champion on their issues,” said Adrianne Shropshire, executive director of BlackPAC. “From our conversations in the field, we know Black voters are excited by Justin’s candidacy and are eager to elect the second Black person to hold statewide office in Virginia’s history.”

Earlier this week, BlackPAC launched an ambitious digital program to reach 400,000 Black voters online and through social media with a video ad urging them to use their vote to stand up to white supremacy. It also began airing a radio ad in support of the Democratic slate in key Virginia media markets.

In September, the Black Progressive Political Action Coalition, a 501(c)4 organization affiliated with BlackPAC, launched a 100-person field effort to increase Black turnout in November. Since the launch of the canvass last month, BlackPAC canvassers have spoken with more than 7,000 Black voters, 90% of whom pledged to vote on Nov. 7.

In August, BlackPAC released a poll, conducted following protests by white nationalists in Charlottesville, finding Virginian voters of color feel “under attack” and that they believe that this year “isn’t politics as usual.” The poll showed Black voters are paying close attention to the news and placing racial justice issues on equal footing with traditional bread and butter issues like jobs and education.

Voters of color are poised to play a decisive role in the election. In the 2013 gubernatorial election, Black voters accounted for 20% of the vote share, Latinos 4%, and AAPI voters 1%. Democratic Governor Terry McAuliffe won in 2013 by maintaining the same level of support among the black electorate that President Obama won in 2012, despite the usual midterm drop-offs.

BlackPAC’s mission is to galvanize the political power of Black voters. Driven by opinion research and in-depth conversations with voters on the doors, BlackPAC is building a base of knowledge on the issues, values, and messages that most effectively motivate Black people to vote. Additionally, by identifying and training the next generation of activists and political organizers, BlackPAC is rallying Black voters around an agenda to dismantle structural racism and increase social and economic opportunity.