I’ll post more later, but for now here’s some great video and photos from today’s #WaterIsLife rally in Richmond against Dominion’s proposed fracked-gas pipeline monstrosities. Great job by CCAN, the Sierra Club of Virginia, Applachian Voices, the many other environmental groups and everyone else involved in organizing today’s rally (see their press release below), and thanks to everyone who spoke, marched, etc. The bottom line is we have to keep fighting, no matter what the odds against us…the cause (protecting our planet from fossil fuel interests’ destruction) is very much worth it! 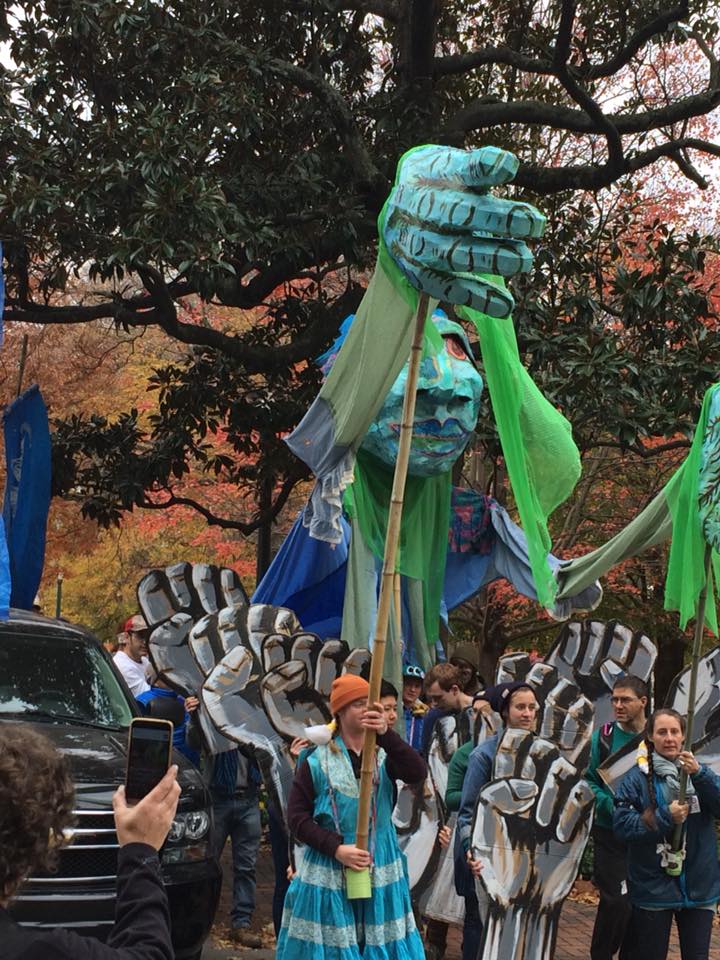 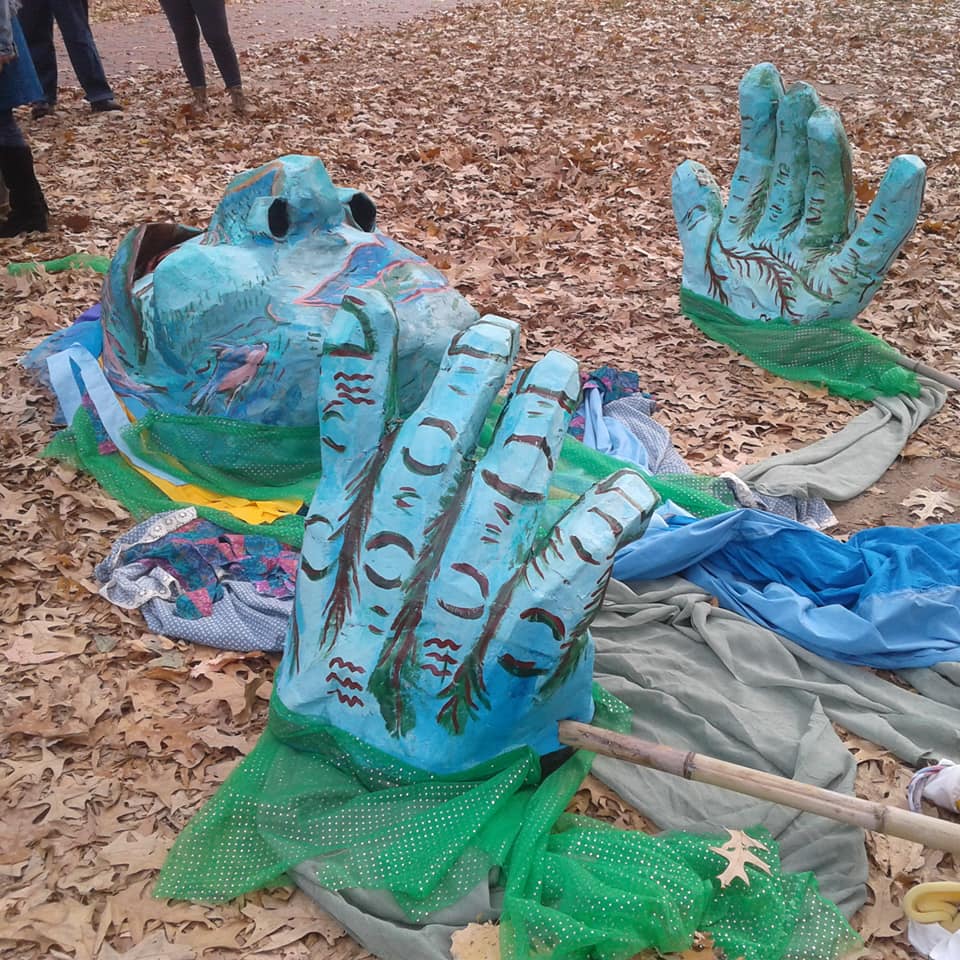 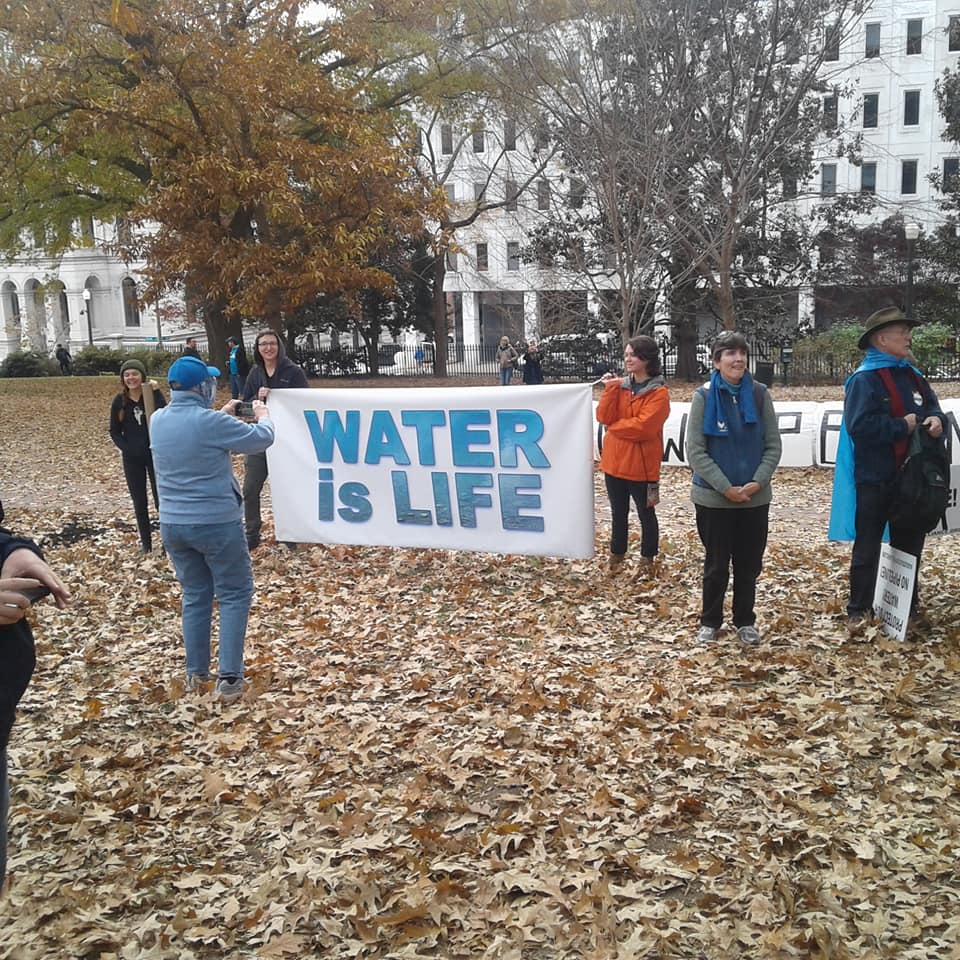 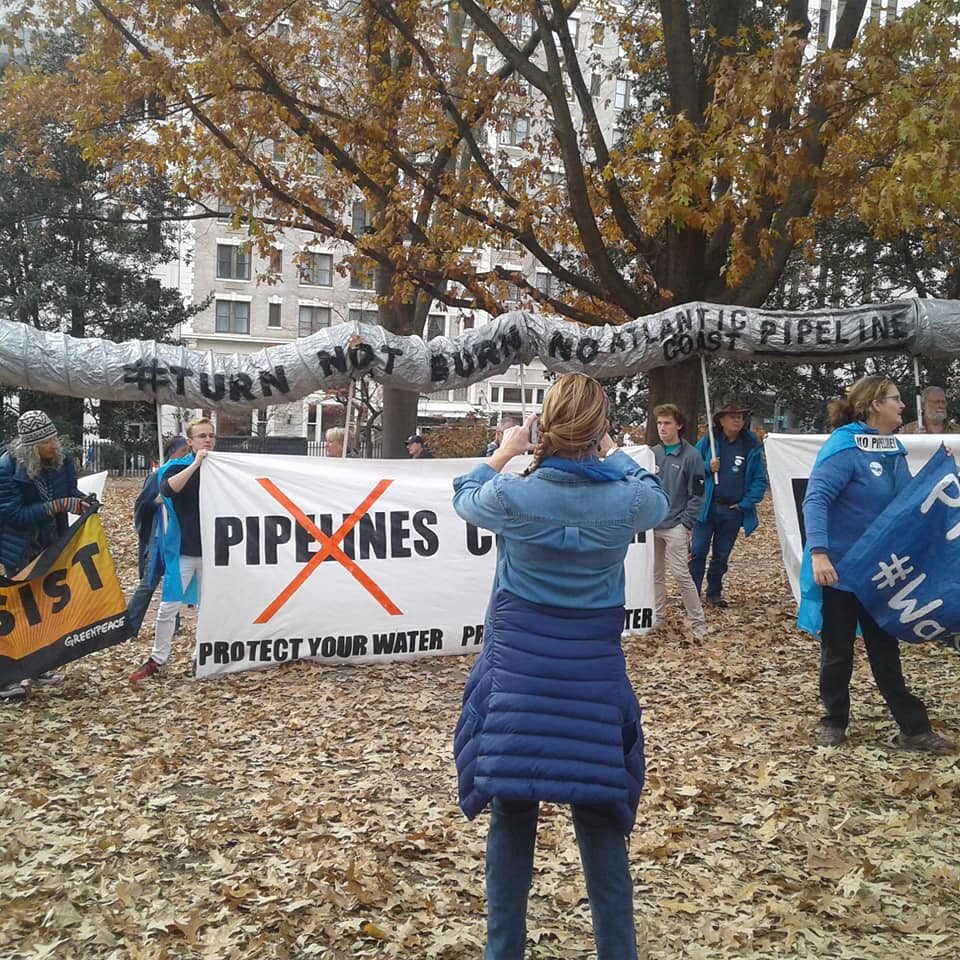 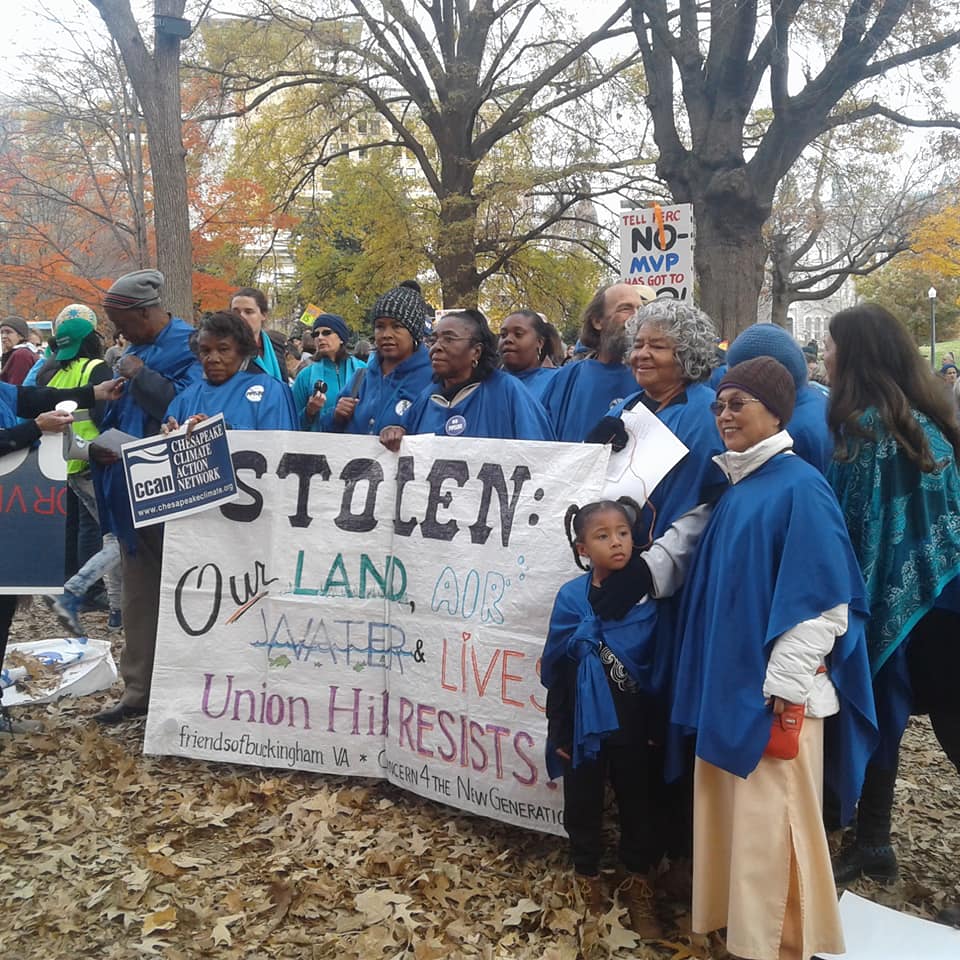 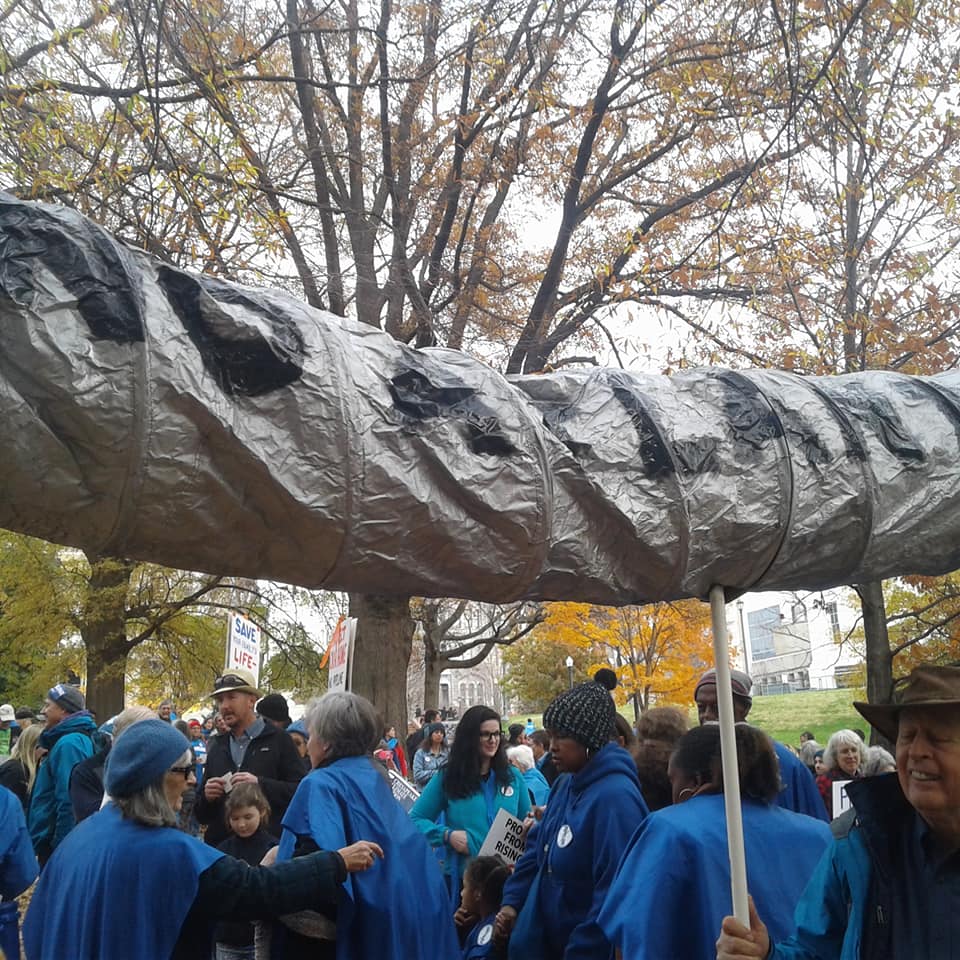 Encouraging to see so many Virginians come together to speak out against Dominion’s pipelines, and support clean energy jobs. #noACP #WaterIsLifeVA pic.twitter.com/RZtJNq3tKz

Huge #WaterIsLifeVA rally has swelled to over 500.

“We WILL defeat these pipelines!” Thank you Mary Beth for standing up against the fracked-gas ACP & MVP! #NoACP #NoMVP #WaterisLifeVA pic.twitter.com/Wu8jZu5lEo

Thank you to our First Nations water protectors. We know #Waterislife and we must protect it. #NoACP #NoMVP #WaterisLifeVA #mniwiconi pic.twitter.com/O5m7JzPa2w

HUNDREDS out at the Rally- and still time to join if you’re in #rva! Concert begins at the National at 2pm! #noacp #WaterisLifeVA pic.twitter.com/FOcfvZGc8N

Encouraging to see so many Virginians come together to speak out against Dominion’s pipelines, and support clean energy jobs. #noACP #WaterIsLifeVA pic.twitter.com/RZtJNq3tKz

Statement from the consortium of environmental groups that put together today’s event.

Richmond, Va. — Upwards of 500 Virginians from all across the state joined with elected officials, a statewide coalition of environmental advocates, and indigenous tribal leaders today in Richmond for a historic demonstration against the proposed Atlantic Coast and Mountain Valley pipelines. Holding hands and ribbons of blue, the participants encircled the Capitol Grounds and called on state leaders — including Governor Terry McAuliffe and Governor-elect Ralph Northam — to protect Virginia’s water and reject the fracked-gas pipelines.

The “Water is Life Rally & Concert” comes four days before the State Water Control Board begins a series of public meetings on the Mountain Valley (Dec. 6 and 7) and Atlantic Coast (Dec. 11 and 12) pipelines, at which the board is expected to decide whether to approve water quality certifications for the projects.  The idea for the event sprang from the local groups along both pipeline routes as a way to unify their voices and send a single, strong message to state regulators that Virginians stand in solidarity to oppose the dangerous and unnecessary fracked-gas pipelines.

>> Photos and a short video of event available for download here.

Several speakers rallied the crowd, including Del. Sam Rasoul of Roanoke, one of several candidates who refused money from Dominion Energy — lead developer of the Atlantic Coast Pipeline — and other fossil fuel companies during the election. “I have the responsibility to speak up on behalf of my constituents and speak out against the Atlantic Coast and Mountain Valley pipelines,” Rasoul said. “I want to ensure that our communities’ drinking water remains safe, and our water sources are not jeopardized. Virginians know these pipelines would bring more harm than good. I urge Governor McAuliffe and the Water Control Board to reject the Atlantic Coast and Mountain Valley pipelines.”

After the rally,, the crowd followed an enormous Water Spirit Puppet created by All the Saints Theater Company to The National theater for a free concert. Delegate-elect Jennifer Carroll Foy of Woodbridge was the keynote speaker.

“More than ever, we need to protect our water and environment,” Foy said. “At Possum Point, only a few miles from my home, an old coal plant continues to leak toxic metals into our water supply because the coal ash has not been stored properly. We owe it to all of the families living in this area, including my husband and my infant twin boys, to fight for clean, safe drinking water.”

“I continue to have grave concerns about the clean water certificate approval process by Virginia’s Department of Environmental Quality for both the pipeline projects,” said Delegate-elect Chris Hurst, of Giles County. Both Hurst and Foy also refused Dominion money during the elections. “The proposed Mountain Valley Pipeline could irreparably harm the drinking water of thousands of people in the Roanoke and New River Valleys. I will continue to speak out for my constituents and neighbors to advocate that more research and evaluation is done before DEQ allows this experimental project to continue.”

The concert featured a presentation by the First Nations Voice, including representatives of the Nottaway and Pamunkey tribes, a coalition of many Virginia tribes speaking out to defend their sacred ground and water, and performances by Lobo Marino, No BS! Brass Band and The Wild Common. The concert also featured a participatory water protection ritual in which children and landowners gathered water offerings from every corner of the state and made pledges on the way to go forward.

Other speakers at the event included:

Mary Beth Coffey, landowner in Bent Mountain: “The fracking companies behind Mountain Valley Pipeline said they have an ‘interest’ in my land. I know what this means: they’re condemning my property.  I’m saying no. Our water in Bent Mountain is irreplaceable. This is our Mother’s land. We intend to protect it for our Mother Earth.”

Brennan Gilmore of The Wild Common, a new band formed to welcome President Obama to Virginia in October: “We are here today to stand up against two unnecessary and dangerous pipelines that represent corporate interests but threaten the Virginia whose hills and valleys and rivers  gave birth to the musical traditions that we represent.”

David Sligh, former Senior Engineer at the Virginia Department of Environmental Quality and current Conservation Director at Wild Virginia: “The pipelines cannot be built as proposed  in ways that will comply with the Clean Water Act – period. That judgement is based on many years of experience by experts in a variety of technical and scientific disciplines. Where the McAuliffe administration has failed in its duty, we now must trust that the seven members of the State Water Control Board, citizens who have a solemn duty to obey the law and defend all citizens’ rights, will heed the clear scientific evidence and legal guidelines and reject these harmful projects.”

Pastor Paul Wilson, minister of Union Hill Baptist Church: “These pipelines are an atrocity of justice. The fracking companies want to poison the communities least equipped to speak up and fight for themselves. I refuse to allow them to treat my neighbors like sacrificial lambs.”

The “Water is Life Rally and Concert” was put together by a broad coalition of organizations, including: