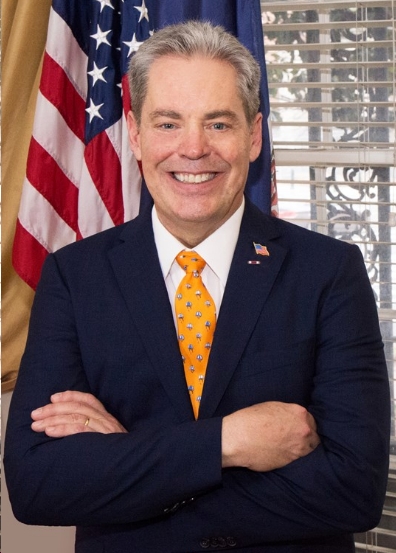 The following is a guest post by John Suddarth, a Democratic candidate for Congress in Virginia’s First District.

I’m running for congress in Virginia’s historic first district.  I knew running for congress would be hard work.  I knew I would have to ask friends, family and strangers for money to support my campaign—something no one likes to do.  What I did not know is how much active assistance I’d get from so many people.  You inspire me to work even harder for our progressive agenda.

As a candidate, I’m meeting many passionate, empathetic, progressive Americans in our district, deeply concerned about the direction of our country who have been waiting on the sidelines, eager to get involved but not knowing how.  Groups like Indivisible, CircleUp, Together Hanover, as well as traditional organizations as the various Hanover Democratic Committees, are vehicles for such involvement and action and membership rolls are swelling. Their involvement is critical to electing progressive candidates like me in tough traditionally Red districts like Virginia’s First and sending us to Washington to get this country moving again.

I hear again and again from families who cannot afford health insurance, who do not qualify for unexpanded Medicaid and cannot afford insurance on the ACA exchanges.  This is because the GOP has sabotaged the Affordable Care Act, hoping it would fail.  They shortened the enrollment period.  They hedged on cost-sharing with health insurers so rates shot up 35 to 81%. Aetna and United Health left the state.  The GOP did this not just out of the inability to understand how health markets really work but out of pure spite for anything advanced by President Obama and the Democratic Party and disregard for the well-being of less affluent Americans.  In some of our rural counties, there is a choice of only one insurer.  Providers without an insured patient base on moving out of the area and clinics are closing down.  Well, those of us trying to ride the Blue Wave into congress intend to do something about that.

I am a strong advocate for fundamental reform to our healthcare system, a change that would lead to universal access to affordable healthcare and unsurpassed global competitiveness. It would create a truly dynamic American economy while cutting our healthcare costs in half, saving us $1.5 trillion a year, half of that in savings to the federal government.

We do not have to reinvent the wheel. Single-Payer is the preferred healthcare system throughout the industrial world.  Almost every industrialized democracy save America insures all of its citizens; these citizens have better healthcare outcomes at half the cost.  Citizens in democracy after democracy have universal access.   Their companies don’t have to provide health insurance to employees, so they hire workers more freely.  Their workers don’t have a $15,000 insurance burden on their backs as do Americans, so they don’t have to be as productive as we do to have a job.  Today companies choose to create new jobs in countries with lower healthcare costs.  Let’s fix our healthcare system, reduce our costs, and bring jobs home to the world’s most productive workers.

Single-payer healthcare would also liberate our citizens from working in jobs just for health insurance and enable them to pursue their entrepreneurial dreams.  Assured universal access and insurance would remove the anxiety so many of us face when ill or injured.  In today’s expensive American healthcare system, some parents don’t even let their children play sports because they can’t afford the emergency room.  Those with pre-existing conditions, half of us, fear what the GOP will do next to the Affordable Care Act that prevents discrimination against us. Senior citizens don’t take recommended dosages of prescriptions because they can’t afford to pay twice as much for medicine as do Danes or Singaporeans.  And everyone fears losing insurance or an illness resulting in financial failure and bankruptcy.  We have 600 thousand bankruptcies in this country every year due to our dysfunctional healthcare system.  Good, hardworking Americans losing everything because the system serves the health insurers and pharmaceuticals and not the public.  Let’s rid ourselves of this needless anxiety. This is wrong, it is immoral, and it has to be fixed.

Single-payer would also eliminate the cumbersome administrative burdens providers bear. Every doctor’s office in America is protected by a staff behind a front desk that screen would-be patients for valid health insurance prior to being seen by an actual provider.  Our current for-profit system has reduced access to healthcare to a pay system like a fast food drive-thru where you don’t get your French fries at the second window until after you hand over your money at the first.

In addition to my experience running multinational companies and seeing how our healthcare system hurts the American worker and our economic competitiveness, I have studied this issue closely.  I have received guidance from the Physicians For a National Healthcare Program.  I’ve had in depth discussions with a family practitioner who received his medical training in Canada.  Canada has single payer healthcare and physicians enjoy levels of income and lifestyles commensurate with those of physicians here. They have the added joy of not having to turn away patients.  And the experiences of Canadian patients were as good or better than those experienced by Americans, except for the lack of out of pocket expenses, anxiety about coverage, and threat of financial ruin.  My vision is to do better than Canada and include prescription drugs in our single payer plan.

The GOP talks about healthcare being provided by private insurance companies.  Well, the free market has had hundreds of years to provide universal healthcare at a reasonable cost and has failed miserably on both counts.  Most Americans believe healthcare is a basic human right, just like access to clean air and water. Why are we not assured what each of us will need at different points in our life?  Because some politicians care many times more about the well-being of businesses than they do about yours.

The GOP position is fundamentally flawed.  It is based upon the idea that
healthcare should be rationed based on what a patient can afford to pay, not on what the patient actually needs to get better.  It is clear to anyone paying attention that our free market health insurance companies won’t cover everyone, won’t control costs, won’t allow a true free market and competition, won’t keep wasteful administrative costs down, and won’t limit government control.

Most importantly, our current system creates a moral hazard.  Insurance companies profit by denying care and skim off hundreds of billions of dollars every year for non-valued adding administrative costs and executive incentives!

Physicians are fed-up and frustrated with insurance companies, who make it hard for most to do their jobs. And many would be agreeable to a single payer that assures payment while they pursue the noble dream that motivated them through eight or more years of tough schooling: to heal.

The Single Payer System will: eliminate all that wasted effort in begging for-profits to approve recommended care; it will eliminate restrictive networks that serve primarily the interest of the insurance company, not the patient, certainly not the provider; huge billing costs will be eliminated as will uncompensated care.  Most importantly, it’ll assure you of access to healthcare and eliminate all that related anxiety you currently have.

The manner in which physicians are compensated would NOT change.  But physicians would be free to treat citizens and legal residents with confidence of payment and without the current expensive and cumbersome administrative burden.

If single-payer would do all of these things, why don’t we do it?  Unfortunately vested interests have fought for decades to protect the franchise that pharmaceutical companies and health insurance companies enjoy in this country alone.  They’ve cornered the market through lobbying and donations to politicians at all levels. They’ve set themselves up to the point they can charge Americans twice what other citizens in democracies pay.  And they create fear and anxiety by mischaracterizing the quality and accessibility of care in other countries.  Canadians and Europeans laugh and shake their heads when they hear our politicians criticize their healthcare systems.

And no, single payer is not socialized medicine.  Healthcare would still be performed by private providers.  The only difference would be that everyone is covered and the costs would be a lot less.  Providers could see any patient and not be cul-de-sac-ed into insurance networks which stifle competition.

It will be difficult to move to single payer quickly, not just because of vested interests but because the healthcare system is massive with countless moving parts. People are naturally afraid of the unknown and anxious about change in something as crucial to life as healthcare.  But true fiscal conservatives should applaud and support this system:

Making this transition will require that you put aside all that misinformation you’ve been given over the years about true healthcare reform and objectively look at the opportunity to profoundly improve every American life.  Moving forward requires:

We must reform our healthcare system now before the wheels finally come off. Already 3 million Americans have lost health insurance under Trump.  Now the GOP leadership in the House is talking about eliminating the employer mandate.  If the GOP eliminates the employer mandate after it has undermined the exchanges and refused to expand Medicaid, where will you get your insurance?

Over time we can sharply reduce our healthcare costs to the OECD average while producing better outcomes.  This will result in a more vibrant economy, more competitive American companies, better wages, and a happier, less anxious, and healthier population.

It’s time for us to stand together and support progressive Democrats who will create a single-payer system.  I ask for your support so I can stand strong with like-minded politicians who want to fix our healthcare system, fix our economy, and make America a place where everyone has outstanding healthcare and an opportunity for great-paying jobs. Please go to my website, www.suddarthforcongress.com and volunteer and contribute. This is the first year we’ve had an opportunity to turn the First Blue and it may be the only year.  Act now!

John Suddarth is a Virginia native, West Pointer, veteran, businessman, community leader and fighter for universal healthcare, investment in education and infrastructure and action on climate change and gun violence.  He is a Democratic candidate for Congress in Virginia’s First District.

Sen. Tim Kaine: "Once the Biden administration realized [the balloon] was there, we did things both to block it from gaining access to our information, but also to gather intelligence from the balloon to figure out what China's up to." https://bluevirginia.us/2023/02/tuesday-news-chinese-balloons-were-spotted-near-us-bases-during-trumps-era-rescuers-in-race-against-time-as-turkey-syria-quake-death-toll-passes-5000-what-to-expect-from-biden#comment-6109543304

Glenn Youngkin spouts the same angry rhetoric, yet is taken seriously by many in the "mainstream media"... https://bluevirginia.us/2023/02/tuesday-news-chinese-balloons-were-spotted-near-us-bases-during-trumps-era-rescuers-in-race-against-time-as-turkey-syria-quake-death-toll-passes-5000-what-to-expect-from-biden#comment-6109539403 h/t @RavBogard