I see that three “Barbara Comstocks” – fake ones, but that’s about the best we’re gonna get with Rep. Barbara Comstock – attending yesterday’s “Town Hall for Our Lives” in Sterling. Also attending were a ton of VA-10 voters, as well as a bunch of candidates (all Democrats, of course). See below for photos and video of the event. And if anyone spots Rep. Barbara Comstock somewhere, let us know! LOL 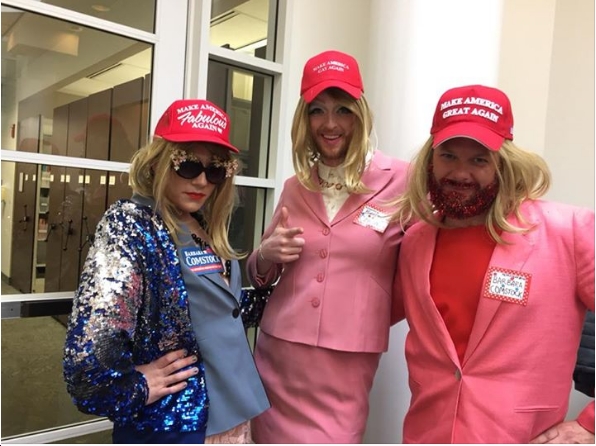 .@BarbaraComstock refused her invitation, so gun violence prevention group (and anti-Comstockers) @GaysXGunsDC showed up in her place.

Huge turnout in #VA10 #TownHallForOurLives. The Dem candidates showed up but not our GOP Rep. Barbara Comstock. Standing room only. pic.twitter.com/V1W4E7V9xC

I was proud to participate in a VA-10 #TownHallForOurLives to talk about ways to end to Gun Violence. Naturally, @RepComstock was nowhere to be seen. #NotOneMore #VA10 pic.twitter.com/T8wV1dEXpO

Thrilled to be at #TownHallForOurLives today. Ready to talk about preventing senseless gun violence. pic.twitter.com/0qUTc9hP52

It was an honor to participate in #VA10‘s #TownHallForOurLives. This is what representation is about: listening and addressing our community’s concerns, directly. pic.twitter.com/SAdOXQ3E2k

Amazing crowd, especially the many students, at the #TownHallForOurLives event today in Potomac Falls! #VA10 deserves a representative who will show up and engage in insightful dialogue and match the energy and enthusiasm of their constituents pic.twitter.com/yYqqmCMuba

So honored to be part of the Town Hall for Our Lives in #VA10 today. Having these conversations is how we make permanent change in the fight against gun violence. pic.twitter.com/kErjEntyt1

Ineffectual @RepComstock holds sham “Town Hall,” leaves her car there and runs away after it’s over to avoid constituents across the street (after trying unsuccessfully to have them removed by sheriff). Some representative. ??? pic.twitter.com/VC16WINuCj

Barbara Comstock abandons her car after her ‘town hall’ at @thermofisher, Middletown VA. Too afraid to face her 7.5 constituents across the street. pic.twitter.com/E78m3OUGai