Yet another strong endorsement for Sen. Tim Kaine, as Republicans get closer to nominating neo-Confederate nutjob, bigot and extremist Corey Stewart to run against him. Go Kaine!

On the Anniversary of Trump’s Decision to Withdraw From Paris Agreement, LCV Action Fund Endorses Senator Tim Kaine for Re-Election

Washington, D.C. – Today, one year after President Trump announced his decision to withdraw the United States from the historic Paris Climate Agreement, the League of Conservation Voters (LCV) Action Fund, which works to elect candidates who will support sound environmental policies, announced its endorsement of Senator Tim Kaine for re-election to the U.S. Senate.

“Senator Kaine is a dedicated public servant and environmental champion,” said LCV Action Fund Senior Vice President of Government Affairs Tiernan Sittenfeld. “He has worked tirelessly to protect our air and water from his time in local and state government and now as a U.S. Senator. He has worked with coastal communities to deal with rising sea levels and supported clean energy throughout Virginia and the entire country. We need Senator Kaine’s leadership in the Senate now more than ever, and we are proud to endorse him again as he runs for re-election.”

“Tim Kaine has been fighting for Virginia’s environment since his days on the Richmond City Council,” said Virginia League of Conservation Voters Executive Director Michael Town. “We know we can count on him to stand against the Trump Administration’s attempts to bring offshore drilling to Virginia and gut federal environmental protections. We look forward to continuing to work with Senator Kaine to move Virginia forward.”

“The United States should be the leader in addressing the effects of climate change that we are already seeing here at home in communities like Hampton Roads,” said Senator Tim Kaine. “One year after the President’s decision to withdraw from the Paris agreement, communities all over the Commonwealth have stepped up to protect our coasts and embrace clean energy. I am proud to receive the League of Conservation Voters (LCV) Action Fund’s endorsement for a second term in the U.S. Senate and look forward to continuing to work hand in hand with the community to leave a healthier planet for our children.”

Throughout his career, Senator Kaine has been a stalwart supporter of statewide conservation and renewable energy initiatives. In 2006, as Governor, he helped protect over 400,000 acres of land and put more than $1 billion into the cleanup of the Chesapeake Bay and Virginia’s rivers. He established a groundbreaking program to survey air pollution from Virginia facilities that had been grandfathered in by the 1970 Clean Air Act as part of a comprehensive effort to reduce air pollution, and he advanced a number of innovative approaches to expand public transit options. In the Senate, he has been a vocal supporter of addressing climate change, rejecting the Keystone XL Pipeline and advancing clean energy solutions. Senator Kaine has a lifetime score of 94% on LCV’s National Environmental Scorecard.

The League of Conservation Voters (LCV) Action Fund, the connected federal political action committee (PAC) of the League of Conservation Voters, works to elect candidates who will implement sound environmental laws and policies, and defeat those who stand in the way of progress. Since the 1994 election cycle, LCVAF has helped elect and re-elect 74 U.S. senators and 331 members of the U.S. House of Representatives. Over the last several years, our efforts have also helped elevate climate change and clean energy as critical issues in key elections.

Paid for by the League of Conservation Voters Action Fund and authorized by Kaine for Virginia. 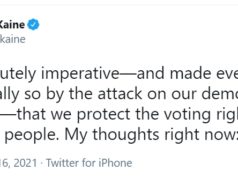