I happened to see the current issue of Arlington magazine lying around the gym, and since I had nothing better to read, I picked it up. Lo and behold, what did I find in there? Check out the screen shots, below, of the latest shenanigans by our pals over at Sinclair-owned WJLA-TV 7.

But first, if you’re not familiar with Sinclair, check out Sinclair’s Propaganda Bomb Is What Media Critics Have Warned About Since Reagan (“President Trump publicly backs the outfit.”); John Oliver Slams “Brainwashed Cult” Sinclair for Creepy Local-News Promos (“Meanwhile, celebrities have begun to call for a boycott on the conservative telecommunications company, which owns or operates almost 200 local stations nationwide.”); Sinclair, the pro-Trump, conservative company taking over local news, explained (“Sinclair reaches 40 percent of households — and soon will reach 72 percent.”). Bottom line: if you think Fox, Rush, etc, are bad, Sinclair might even be worse, in its more insidious, more under-the-radar way.

Now, regarding the Arlington magazine post on Sinclair-owned WJLA-TV 7 Chief Meteorologist Bill Kelly (see below), a few points. First off, it’s important to note that overall, the nation’s TV meteorologists are getting better at communicating climate science. That’s in part due to stuff like this:

Yeah, I’m surprised that GMU is part of this, but apparently the climate-science-denying Koch brothers haven’t gotten to them yet? Unfortunately, Sinclair is hard at work, poisoning the airwaves in its insidious way, including for Virginians on TV stations like WJLA (Northern Virginia), WTVZ (Hampton Roads), WSET (Roanoke and Lynchburg), etc. This matters a great deal, at least if you believe as I do that having a healthy, vibrant free press – one that disseminates facts not fiction, truth not lies – is important for the health of our society and our democracy.

The scary thing about WJLA7 and other Sinclair stations is that they are wolves in sheep’s clothing, as the vast majority of people probably don’t even realize that their product is peppered with right-wing propaganda and bullshit. The fact is, local news is the type of news people trust the most, which is why it’s so dangerous and insidious when lies and deceit are inserted. And I’m not so much talking about crazy Trumpster Boris Epshteyn’s crazy editorials as about the more ordinary/mundane stuff like the weather forecast and the stations’ meteorologists, who tend to be HIGHLY trusted by their viewers.
Which brings us back to WJLA’s Chief Meterologist Bill Kelly, who started with the station last October. According to the Arlington magazine article, Kelly’s views on global warming are about as cowardly, pathetic and mealy-mouthed as you can get:
“I can show you data that suggests people just need to settle down and not worry about it. Or I can show evidence that this is a big issue, and that if we don’t stop our ways, Florida’s going to be underwater in 20 years. And then I’m going to get hate mail. The one thing I think we can all agree on is that the climate has changed and will continue to change.”
So yeah, almost every word of this is seriously f’ed up. For starters, the percent of climate scientists who agree that the climate is changing and that HUMANS ARE RESPONSIBLE FOR IT (by burning fossil fuels, cutting down forests, harmful agricultural practices, etc.) is somewhere between 97% and 99.94%. So no, you really can’t show data “that suggests people just need to settle down and not worry about it.” Plus, just…WTF? People “just need to settle down?” About an existential threat to life on earth? Because if they don’t, Bill Kelly might get “hate mail?” Alrighty then! And we should all do that settling down because some local weather talking head — on right-wing propaganda Sinclair, no less — tells us to? Uh, no…don’t think so.
As for the cowardly cop-out that “the climate has changed and will continue to change,” I could go on for hours about how pathetic and destructive this crap is, but let me make this super simple: if you ever hear anyone use that line or a variant of that line, you can stop listening to them and never take them seriously ever again. On anything. Ever.
So anyway, that’s your “Chief Meteorologist” for Sinclair-owned WJLA-TV 7 in the DC/Northern Virginia market. Do you really need any more reasons not to watch WJLA? If so, I believe that I’ve just given you a big one. 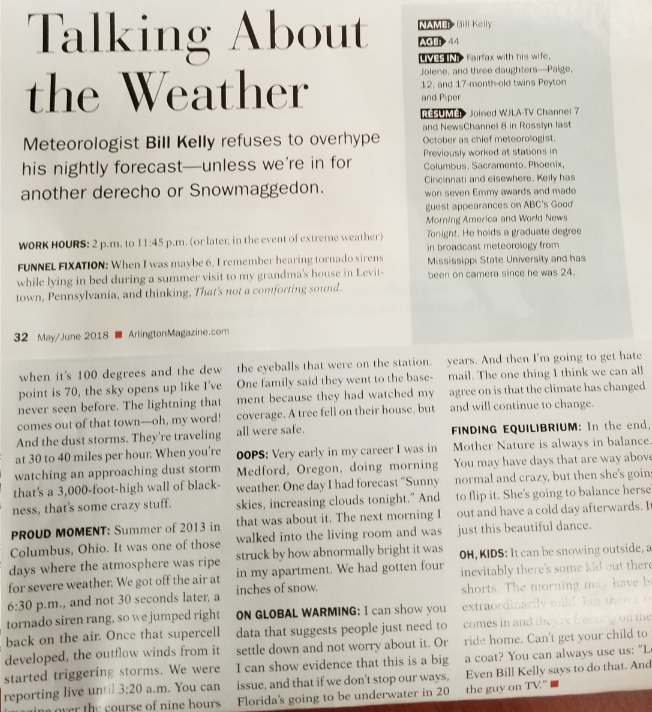 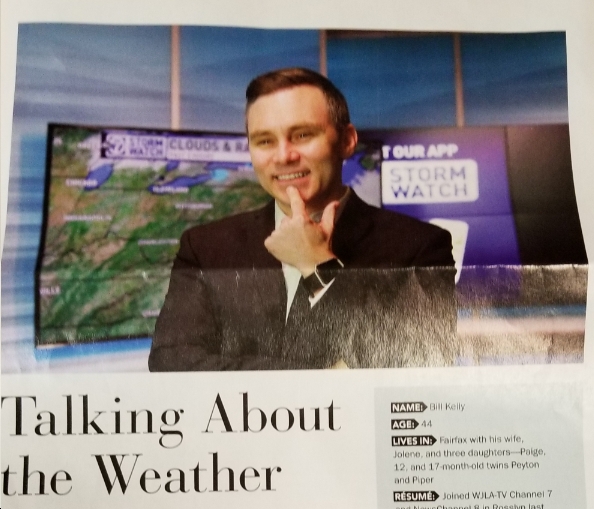