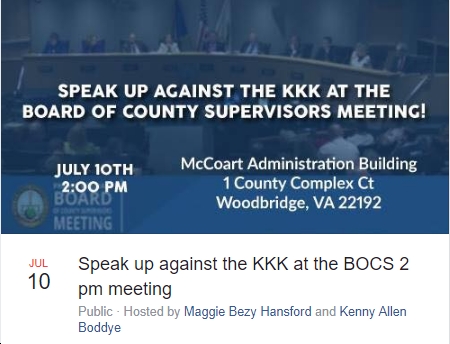 See below for a statement by the Prince William County NAACP, “condemning the Ku Klux Klan’s recent activities in western Prince William and eastern Fauquier counties. Early Sunday morning, families in the New Bristow Village & Gainesville communities woke up to find KKK fliers on their doorsteps and in their yards.” The PW County NAACP notes that Prince William County Board Chair Corey Stewart – who, I’d add, seems to have plenty of time to rant and rave about everything else – had not “issued any statements regarding the fliers” as of yesterday afternoon. Why hasn’t he? (UPDATE: In the Washington Post last night, Corey “said he does not think the county has a problem with hate groups,” adding that “There’s always been stuff like this, sporadically, by some nut job”)

“The rhetoric of elected officials on multiple levels of government continues to embolden those who would preach hate in our communities,” said Prince William NAACP President Rev. Cozy Bailey. “As the pre-eminent organization for advancing social justice for all people, the Prince William NAACP condemns the Klan’s activities, and we call upon our elected officials to do the same, in no uncertain terms.”

As of the afternoon of July 9th, neither Chairman Stewart nor Supervisor Lawson – who presides over the area the fliers were found – had issued any statements regarding the fliers.

The fliers in question included Ku Klux Klan propaganda, including hate speech, and attacks on communities of color, Jewish communities, religious minorities, and immigrants. One flyer also served as recruitment material, and cited a radio show dedicated to the hate group.

“Hate has no home in any community,” Rev. Bailey said in regards to the fliers themselves, “especially a diverse, minority-majority community like Prince William County and the Cities of Manassas and Manassas Park. We hope our elected officials send a strong statement of unity by standing with us.”

Today I spoke to the PWC Board of Supervisors about the Patriot Front recruitment drops in the Manassas and the KKK one in Bristow. Stewart was not present, but I reminded them that PWC has had a long history of white supremacy and racism and it must not be allowed to continue pic.twitter.com/FT6s0TG2vA

Great point by @RepDonBeyer (D-VA08). So will the media make this clear to their readers/listeners/viewers? Spoiler: almost certainly not, because that's just how they roll... https://bluevirginia.us/2023/01/tuesday-news-i-m-f-upgrades-global-outlook-as-inflation-eases-biden-intends-to-end-covid-19-and-public-health-emergencies-on-may-11-the-political-press-has-succumbed-once-again-to-termin#comment-6103924936

As Sen. @timkaine says, "It's long past time to get this done" https://bluevirginia.us/2023/01/tuesday-news-i-m-f-upgrades-global-outlook-as-inflation-eases-biden-intends-to-end-covid-19-and-public-health-emergencies-on-may-11-the-political-press-has-succumbed-once-again-to-termin#comment-6103920875