The New York Times has reported that a super PAC connected with House Speaker Paul Ryan sought and obtained – most likely illegally – Abigail Spanberger’s unredacted federal security clearance application and is using it to help a struggling Dave Brat retain his seat.  According to Larry Sabato and Cook Political 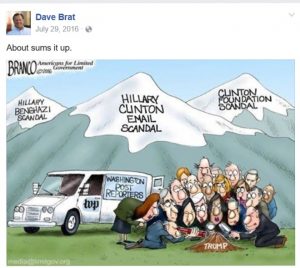 Report, the race is now a toss-up, and Spanberger has been outraising Brat.  Crickets so far from Brat on this, though he whinges again and again about Hillary’s e-mails and puffs himself up as an expert on ethics and the rule of law.  The pungent aroma of eau de desperation is in the air – and it’s still only August!

It is reprehensible that a political group would improperly obtain a copy of my unredacted National Security Questionnaire (SF86) in an effort to get personal information about me. The SF86 is the comprehensive document anyone seeking a security clearance must complete. It contains some of my most personal information including my Social Security Number and medical history. As a result of my SF86 filings, I obtained both Secret and Top Secret//SCI security clearances before dutifully serving my country as a federal agent and then a CIA case officer. Each time I completed this filing, I put my trust in the government that it would protect and secure my most personal information in hopes that the government would ultimately trust me with its most sensitive information, which the government did. Twice.

I am proud of my background, my service and the work I did to keep this country safe, and it is outrageous that the Congressional Leadership Fund, Speaker Ryan, and Rep. Brat are so afraid of losing an election that they would resort to these disgraceful and likely illegal tactics to try and find or create controversy — where there is none — regarding my personal background. This is exactly what is wrong with our politics and it is emblematic of the broken system that I am running to change.

CLF is now attempting to distract from their un-American behavior by coyly questioning what I have to hide. The answer is absolutely nothing, which they should know better than anyone because they have my full unredacted National Security Questionnaire in their possession.

It’s important to our national security that these underhanded tactics by CLF be brought to light, so I’m proud and willing to be the canary in the coal mine so that others who may be targeted — veterans and those who have served our country — can be vigilant.

I call on Congressman Brat to stand up for the rule of law and forcefully and unequivocally denounce this shameful offense by the Congressional Leadership Fund in our district. #VA07

Let’s double-down our support of Abigail Spanberger, who has risked her life many times to protect us.  She’s got the brains, the guts, and the spine to be a great stateswoman.