If it’s Virginia, you know there are always elections coming up. In this case, it’s the special election for House District 24, currently held by Del. Ben Cline (R), who was just elected (unfortunately) to the U.S. House of Representatives over Democrat Jennifer Lewis. The problem for Democrats is that this district is about as deep-red as you can get, with Ed Gillespie beating Ralph Northam there in November 2017 by a 65%-34% margin.

See below for an email from Michelle Watkins, Democratic Chair of the 24th District Nominating Committee, and also a press release from Virginia House Speaker Kirk Cox (R). Also note that at least one Democrat, Christian Worth, has announced her candidacy. I don’t know her, but I’m told she’s very impressive. As for the Republicans, the Roanoke Times reported that there are at least four possible candidates, including “Ronnie Campbell and Jay Lewis, both Rockbridge County Board of Supervisors members ; Catie Austin-Brown, a small business owner from Rockbridge County and the daughter of Del. Terry Austin, R-Botetourt; and Alan Ferguson of Amherst County.”

The Counties of Bath and Rockbridge, the Cities of Lexington and Buena Vista and those precincts of Amherst and Augusta Counties that lie within the 24th District will hold unassembled caucuses from 10am – 4pm on Saturday November 17, 2018 at the LexRockDem Headquarters (11 S. Jefferson Street Lexington VA 24450), the Amherst County Public Library – Madison Heights Branch (200 River James Shopping Center, Madison Heights VA 24572), and the Warm Springs Inn & Tavern (12968 Sam Snead Hwy Warm Springs VA 24484) to nominate a Democratic candidate for the 24th District Virginia House of Delegates.  Any person wishing to seek nomination must pre-file with Michelle Watkins, Chair of the 24th District Nominating Committee (520) 991-3490 or lex.rockdems@gmail.com no later than 7pm on Wednesday November 14, 2018.

There is no charge for those wishing to attend and vote at the caucuses.  Anyone pre-filing as a candidate must pay a $100 non-refundable filing fee, with Ms. Michelle Watkins at the time of submission.

In the event only one candidate seeks nomination as a Democratic candidate for the 2018 Special Election of Delegate for the 24th District, the unassembled caucuses will be cancelled.

UPDATE November 12: Another Dem has announced: 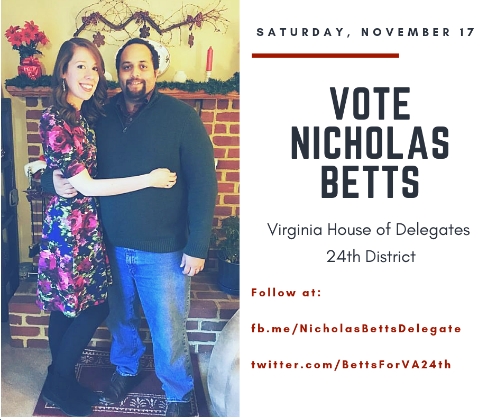