Roanoke, VA – Today, an attorney for the Blue Ridge Environmental Defense League sent a request to Virginia Attorney General Mark Herring urging that he “move the court for injunctive relief” regarding work on the Mountain Valley Pipeline.

The request states, “MVP is clearing land and burying pipe even though it is not possible to grow grass this time of year.  The company consistently acts in callous disregard of the law even in the face of a lawsuit for the violations.  The construction must stop while the action for violating the law is litigated.”

Residents living on the pipeline’s proposed route said they have observed work on the MVP continuing past 11 p.m., under high intensity lights, at sites in Franklin County and atop Fort Lewis Mountain with a foot of snow on the ground and two days of rain in the forecast.  The League’s request states, “Not only does working after dark violate the FERC certificate, the continued construction activity can lead only to further non-compliance of the 401 Certification and water quality impacts.  Given the continuing threat of harm, it makes no legal sense that you have not also moved the court for injunctive relief to halt construction.”

On October 5, the U.S. Army Corps of Engineers suspended the Nationwide Permit 12 permit which allowed the Mountain Valley Pipeline to cross more than 500 streams and wetlands in southwest Virginia.  While MVP no longer has permission to proceed with channeling through streams, rivers and wetlands, they continue work on upland areas which are still severely impacting waterways.

On December 7, Attorney General Herring filed suit against MVP on behalf of Virginia Department of Environmental Quality and the State Water Control Board.  The complaint cited 300 water quality violations by MVP, over several months, which have impacted Virginia’s waterways. The suit seeks the “maximum allowable civil penalties”, but failed to force MVP to stop work.

At last week’s State Water Control Board meeting, the Board voted to hold a public hearing on revoking the state’s 401 Certification.  The date of the public hearing has not been announced.

Attorney Tammy Belinsky filed the request to Attorney General Herring on the behalf of the Blue Ridge Environmental Defense League and its chapters opposed to the MVP Piedmont Residents In Defense of the Environment, Preserve Bent Mountain/Roanoke, Preserve Floyd, and Preserve Franklin. 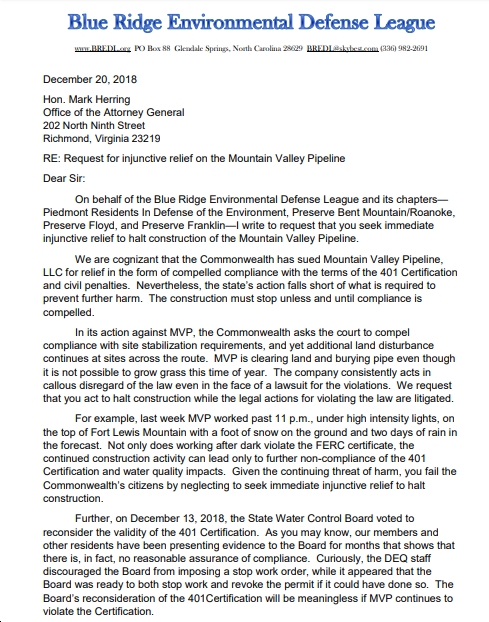 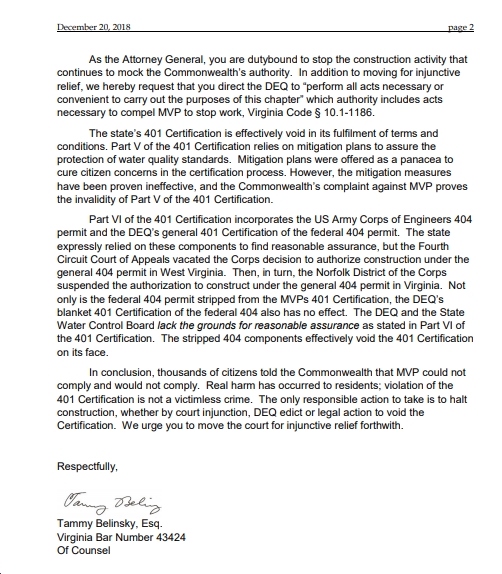