This is a developing story, and we do not know all the details yet, so stay tuned. For now, suffice to say there are rumors that a photo exists somewhere of Attorney General Mark Herring in blackface, from 1979 when he was a student at UVA. And it is reported here that he met urgently with members of the Legislative Black Caucus this morning. 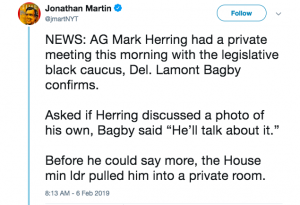 Virginia Republicans “Quote Dr. King on social media one day out of the year” while “liv[ing] a life that runs counter to his words...