See below for video of tonight’s Arlington County Democratic Committee debate for the Arlington/Falls Church Commonwealth’s Attorney position, with incumbent Theo Stamos vs. challenger Parisa Tafti. The debate was “lively,” as they say, with some intense exchanges, an at-times rowdy crowd, and with coverage of a wide range of issues related to criminal justice and the Commonwealth’s Attorney job. It’s fascinating how this race is getting so much attention this year, when in previous years there was almost no attention paid to it. To me, that’s a great thing, as citizens absolutely should think through what they want from their criminal justice system in general, and their Commonwealth’s Attorney specifically. With that…here’s the video. Enjoy! 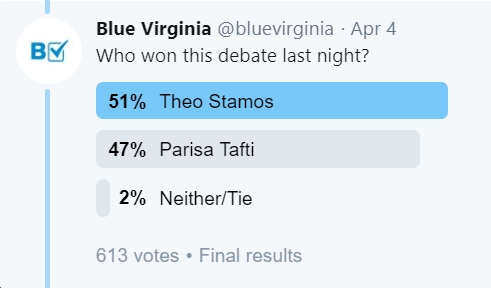 Keeping Guns Out of the Schools

Not Tough Enough of Too Tough on Crime?

Building Bridges with Other Components of Criminal Justice System

Crowd Applauding at End of Debate