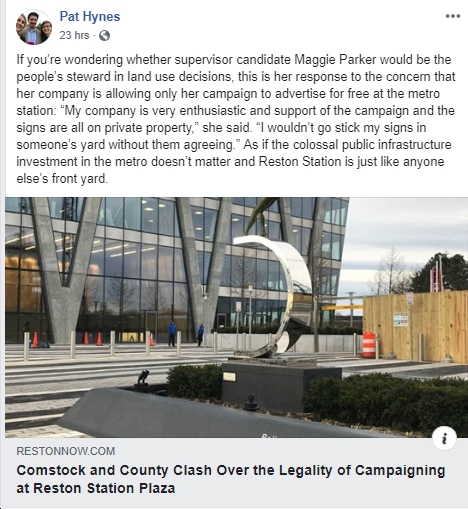 This is absolutely absurd and unacceptable:

Comstock Companies, the developer of Reston Station…has adopted a longstanding policy that political campaigning is not allowed at the plaza, according to Maggie Parker, Comstock’s vice president of communications.

“It would be like me setting up shop on Walter [Alcorn’s] front lawn,” Parker, who is also a candidate in the race for Hunter Mill District Supervisor, said.

Alcorn, who is also running for the seat vacated by longtime Hunter Mill District Supervisor Cathy Hudgins, said volunteers from his campaign were recently barred from campaigning outside of the Starbucks on the plaza.

He says a security officer told campaigners that political activity was not allowed at the site.

“It’s unfortunate that what should be publicly usable space is being operated as private space,” Alcorn said. “This is one of the challenging and frustrating things about where we are as a community. We’ve really privatized our public spaces.”

I looked into Maggie Parker, and I did *not* like what I saw. For instance, she donated $1,000 to Republican-turned-Independent Scott York in the 2015 Loudoun County Board of Supervisors race, against Democrat Phyllis Randall. Not. Cool. At. All.

Also, in perusing her website, Parker honestly sounds more like a Republican than a Democrat, and certainly not a strong progressive or environmentalist. For instance, she writes that she supports “Promotion of economic growth to lower residential tax rate while supporting education, public safety, social services, and the continued reduction of homelessness.” Sounds like supply-side/trickle-down economics to me. Other than that, I see nothing in her issues section that talks about strong action to move Fairfax County towards clean energy; nothing about equity or “One Fairfax”; and almost nothing on important issues like housing affordability; social services; etc.

And, as an added “bonus,” her bio is replete with involvement in Chambers of Commerce, which sad to say, at this point have become largely adjuncts of the Republican Party. Finally, I agree with the comments (by other commenters) on Fairfax County School Board member Pat Hynes’ public Facebook post (see screenshot, above), including:

And with that, I urge all Hunter Mill Democrats to vote for one of the other candidates, OTHER THAN Maggie Parker. Those Democrats are Parker Messick, Shyamali Hauth, Laurie Dodd, and Walter Alcorn – any of whom would be preferable to Parker.