In Fairfax County’s Hunter Mill District, long-time supervisor Cathy Hudgins is retiring, and five Democrats –  Parker Messick, Shyamali Hauth, Laurie Dodd, Walter Alcorn and Maggie Parker – are running for the June 11 Democratic Party nomination to succeed her. Recently, one of those candidates (Laurie Dodd) sent out a press release (see below) hitting another candidate (Walter Alcorn) for “campaign finance reports” showing that “his donors includ[ing] leaders of ALEC, the rightwing group funded by the Koch brothers, and that he has violated his own pledge not to take money from developers.”

Not surprisingly, that caught my eye, as I have long believed – and written – that ALEC is utterly heinous, as are the Koch brothers, and also because I believe that it’s *very* important to avoid even the appearance of influence by real estate developers over local elected officials. I wanted to get Alcorn’s side of the story, so I emailed him and ended up speaking with him at length. In response, he sent me the following comments, including that he’s returned the two contributions from individuals who work at ALEC, and that the donations from developers are “from two college friends who don’t have projects in the district – or in Fairfax County at all.”

With that, here are Alcorn’s comments, followed by the full statement from Dodd, which I referenced above. I think it’s healthy that Dodd raised these issues, and also that Alcorn (who, by the way, is widely viewed as the frontrunner in this race, with endorsements from Rep. Gerry Connolly, Supervisor Sharon Bulova, State Sen. Jennifer Boysko, etc.) responded promptly and forthrightly. May the best Democrat win on June 13! 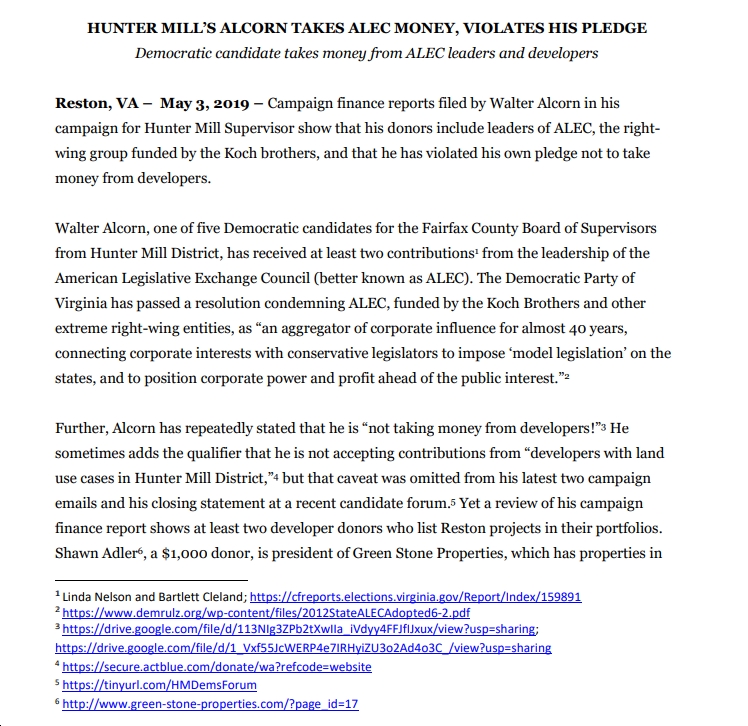 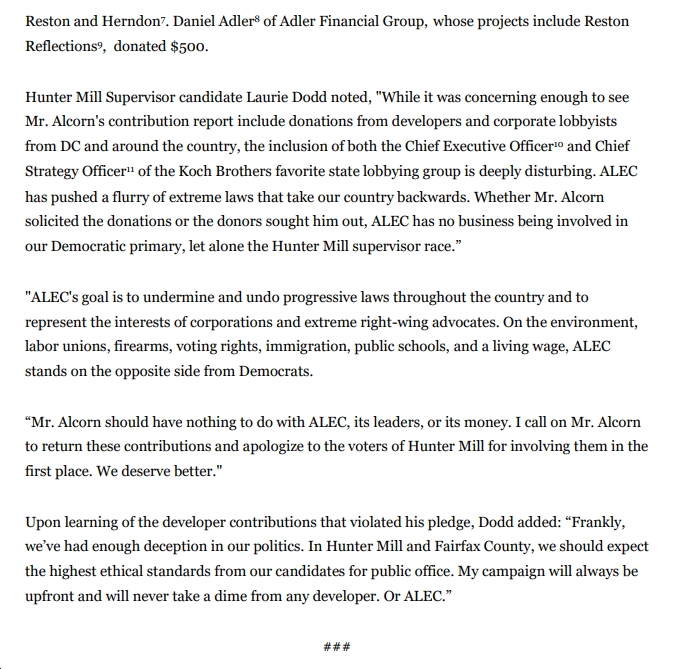 P.S. I’d note that one of the other candidates, Maggie Parker, is VP of Communications at Comstock Companies, which is “a diversified real estate organization with a 30+ year history of investing in, developing, owning and operating virtually all types of residential, commercial, and mixed-use real estate,” including major projects in Fairfax County generally and in Hunter Mill District specifically. Now *that* seems like a huge potential conflict of interest!