See below for an email, by Fairfax County Democratic Committee (FCDC) Chair Dan Lagana, that was just forwarded to me by two FCDC members, both of whom told me they weren’t particularly happy about it.  What might have triggered this email is this flier, which urges Fairfax Dems to “PLEASE VOTE ONLY ABRAR [for School Board, At-Large]” and to “NOT VOTE FOR ANY OTHER SCHOOL BOARD CANDIDATES.” I checked around, by the way, and am still not sure where this flier came from or how widely it’s circulated over the past few days. But regardless, clearly FCDC felt the need to urge its members – and note that only FCDC members can vote in the School Board endorsement process – not to “bullet vote,” but instead to “CAST A VOTE FOR ALL THE AVAILABLE SLOTS IN EACH RACE.”

Just a few thoughts on this. First off, I agree with what FCDC member/officer Sean Perryman wrote the other day, that “the current endorsement process is exclusive, undemocratic, and we can do better.” Instead, I agree with Perryman that it should be opened up to as many people as possible, within the constraints of Virginia law and the Dillon Rule, of course. A “firehouse primary,” while not perfect, would certainly draw a lot more voters than this party endorsement process, and would avoid the whole issue of having to join FCDC (including paying a membership fee, unless one pleads hardship) in order to vote in the election.

Second, as far as I’m aware, it’s totally within the rules of the FCDC endorsement process for people to vote for fewer than the maximum number of candidates, even to “bullet vote” if they want to. Whether it’s in the “spirit” of the process is another question. In my view, if you honestly only support one candidate, either because you don’t like the other candidates or don’t know anything about them, then sure, only vote for that one candidate. On the other hand, I wonder why someone wouldn’t take the time to research the other candidates, especially when you can vote for up to three of the four candidates on the ballot. Seems very weird to me…

Third, if FCDC really doesn’t want people to “bullet vote,” they probably should have made that clear up front, before voting started. As it is, a bunch of people have already voted, prior to the admonition not to bullet vote.

Fourth, just to be clear, I definitely don’t think it’s cool to put out a flier urging people to “NOT VOTE FOR ANY OTHER SCHOOL BOARD CANDIDATES” aside from one’s own preferred candidate. To the contrary, I agree with FCDC Chair Dan Lagana that “We are on the same team,” and that “lingering bitterness between colleagues and within FCDC, while natural after campaigns, will be pronounced and prolonged if a candidate wins because their supporters bullet voted for that candidate and no one else.”

With that, here’s the FCDC Chair’s email, followed by the flier urging people to bullet vote. What do you think?

FCDC and the Democratic Party resolutely believe in, and rely on, fair play and good faith in our practices, in our management of the endorsement process, and in our expectations of all our members.  The act of voting for only one candidate in races in which there are more than one open slot defeats those important goals.

We are on the same team. We will support our candidates, regardless of who wins. Lingering bitterness between colleagues and within FCDC, while natural after campaigns, will be pronounced and prolonged if a candidate wins because their supporters bullet voted for that candidate and no one else.

Therefore, I ask you to vote with both the spirit and the letter of our procedure, as follows.

Again, I appeal to each of you to CAST A VOTE FOR ALL THE AVAILABLE SLOTS IN EACH RACE.

If you feel as if you do not know much about the offices and or candidates and want to learn more, please visit the websites below.  Additionally, we held a candidates forum on Saturday, which you may watch here.

Questionnaire responses from candidates for School Board At-Large:

Click here to learn about the Soil & Water Conservation District 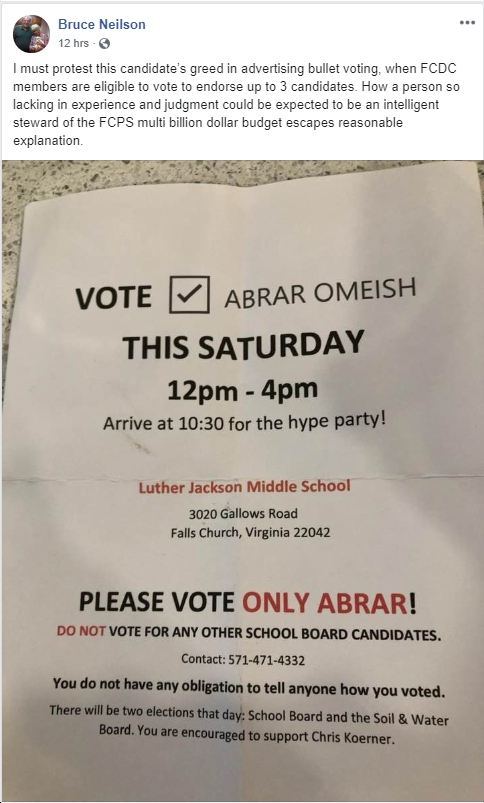