This piece will run as an op/ed in my very red congressional district, VA-06.

This moment has been coming on for some time, as a big piece of America’s body politic grew more and more antagonistic toward everyone who wasn’t like them – politically, religiously, racially, sexually. More and more energy has been channeled into hostility toward liberals, toward Muslims, toward black and brown people, toward those who aren’t Christian, toward people here from other countries, toward people who don’t fit into the usual sexual modes.

So many enemies to hate.

Over the years, the base of the Republican base – listening to the voices of Limbaugh and Gingrich, then Fox and Karl Rove, teaching contempt and hatred toward a growing list of “others”– got trained into a culture in which “Love thine enemies” was about the last thing people were encouraged to do.

All that training in enmity prepared the way for that base to be swept up into the candidacy and then the Presidency of Donald Trump, a man who shows little capacity to love anyone, least of all his enemies. Enemies – to hate and attack — are essential to his whole way of operating. “Attack thine enemies” might be Trump’s credo.

Trump is so captive of that impulse that, unlike any other President, he seems driven to strike back at anyone that speaks against him— directing his supporters to hate them as enemies.
To maximize how much his base hates Trump’s enemies, he continually resorts to lies, painting false pictures to make those designated enemies look like villains that they are not. Like:

• Making the issue of immigration into an “invasion,” which it wasn’t.
• Lying about what the (mostly black) NFL players who knelt for the national anthem were trying to say, making them into traitors rather than people taking a stand that every human being who understands anything should regard with empathy.
• Conjuring up some “deep state” to explain away the investigations and possible impeachment of a lawless President;
• Misrepresenting Democrats as wanting “open borders”;
• Frightening his people with “American carnage” (meaning hated inner cities), when the rate of violent crime nationally is at a historic low.

Which all brings us to this present moment, where – in his attacks on four congresswomen of color – in the eyes of most Americans, Trump crossed some lines, gone too deep into hatred’s territory.

As always, Trump’s demonization of his enemies was built on lies. But the news here was how completely Trump put aside the “dog whistles” of racism and plugged directly into one of the oldest and deepest themes of American racism with the idea that these congresswomen – three of whom were born in the USA – should “Go back where you came from.”

So well-known is that language’s connection with racial hated that its use in any workplace is explicitly forbidden in federal law– forbidden because it’s long and ugly history makes clear what it is expressing: rejection, hostility, rage, and even often a threat of violence toward someone who is recognizably not of the kind of European stock that has long dominated this country (including through institutions of racial oppression justified by White Supremacy).

Yet the President of the United States used this language against those four congresswomen of color – in his tweets and then in his North Carolina rally where he whipped up a crowd to chant (against the one of the four congresswomen not born in the USA), “Send Her Back.”

(There’s good reason to believe that this chant was planned by the Trump crowd.)

The next day, Trump falsely claimed not to have approved of that chant, and to have cut it short, even though the video shows him allowing it to continue a while and looking very satisfied. (Trump’s expression reminded me of what one sees in the pictures of Mussolini when he stood at the balcony feeding on the hatred that Italian fascism was directing against the regime’s designated enemies.) 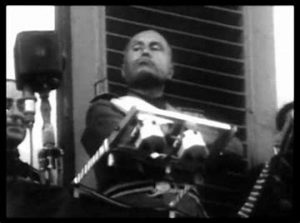 With this utter failure of the ideal of “love thine enemies” to come to life in the Republican base, this episode reveals how separated the Republicans have become from the rest of the nation.

Polls show that very large majorities across the political spectrum – except for Republicans, but including Independents — reject this hate-mongering of Trump’s. But the polls also show that the same behavior that most Americans condemn has increased Trump’s support among Republicans by some 5%.

While Jesus’s message was consistently one of love—“thine enemies” as well as “thy neighbor” — the Republican base is evidently so captured by hate that having their leader’s speaking hatefully against those presented to them as enemies brings them closer to him.

It should be obvious that it is Jesus’s teaching of love that is the recipe for creating a society in which goodness reigns. And likewise obvious that power wielded to expand the domain of hatred can only make the world a worse place—more human suffering, more injustice, more conflict.

Yet somehow — so broken have some people become in their political passions and perceptions — the overwhelming majority of America’s Evangelical Christians support this President. What would Jesus say?